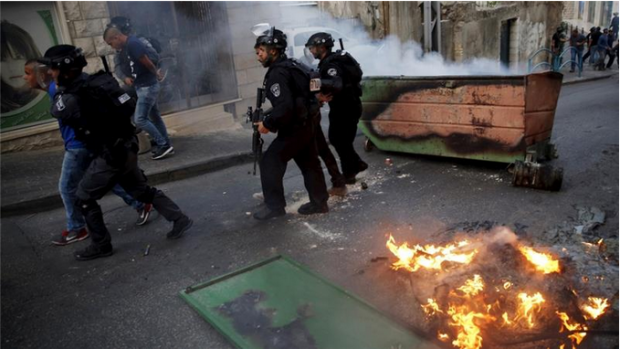 Palestinians In Israel Call For Strike As Protests Grow

Above Photo: Israeli police have arrested more than 100 Palestinian citizens of Israel during protests in cities like Jaffa, Haifa and Nazareth. Reuters.

Jerusalem – Palestinian citizens of Israel have announced a general strike and more protests as unrest continues to sweep Israel and the occupied Palestinian territories since the killing of two Israeli settlers in the West Bank on October 1. The High Follow-Up Committee for Arab Citizens of Israel, an extra-parliamentary body that represents the minority community, declared a general strike for Tuesday. Arab-owned businesses, schools and other institutions will be closed. For the past week, thousands of Palestinians in Israel have protested in Haifa, Jaffa, Nazareth and other cities and villages in Palestinian communities across the country.

The High Follow-Up Committee said in a statement that “solidarity and protest” were necessary in the face of “fascist incitement” and attacks on the part of the Israeli government. Majd Kayyal, media coordinator of Haifa-based Adalah Legal Centre for Arab Minority Rights in Israel who has attended protests in the last week, told Al Jazeera that the strike was motivated by the “harsh treatment” employed by Israeli police to disperse peaceful protests in present-day Israel.

“There isn’t a Palestinian city or village that hasn’t protested the colonial policies in Jerusalem and the West Bank, and just like in [the occupied territories], the Israeli response has been brutal,” he said. Kayyal estimates that “100 people have been arrested in the past week. It shows that the Israeli police views us as the enemy”. Last Thursday, Israeli police arrested 16 protesters in Nazareth during clashes, according to local media. Just two days earlier, confrontations between police and demonstrators left six officers injured and two protesters detained. The occupied territories and Israel have been gripped by a wave of violence, with 26 Palestinians, some of whom were suspected attackers, killed since October 3. More than 1,990 others have been injured, according to the Palestinian Authority’s ministry of health. Since the beginning of the month, four Israelis have been killed and 67 wounded. The majority of this violence has taken place in Israeli-occupied areas. Speaking at an emergency Knesset session on Monday, Israeli Prime Minister Benjamin Netanyahu called upon Palestinian citizens of Israel to “kick out the extremists among you”. Netanyahu said he wants “coexistence between Arabs and Jews in Israel”, but that certain parties and organisations are “undermining” the government and supporting violence actions. His comments come at a time when the Israeli government is cracking down on dissent from Israel’s Palestinian minority, which accounts for more than 20 percent of the population.

Including Muslims, Christians and Druze, 1.7 million Palestinians carry Israeli citizenship and live in communities across the country. They are targeted by more than 50 discriminatory laws that stifle their political expresssion and limit their access to state resources, according to Adalah. The prime minister expressed that he will seek to make illegal the Northern Branch of the Islamic movement, which he says is “spreading lies” about Israel’s frequent incursions in the al-Aqsa Mosque compound in the occupied East Jerusalem, the flashpoint for the current round of violence. On Sunday, Netanyahu instructed Israeli Attorney General Yehuda Weinstein to open a criminal investigation into Knesset member Hanin Zoabi of the Arab Joint List, an electoral coalition of Palestinian-majority parties, after she called for a “popular intifada”. Yousef Jabareen, a member of the Arab Joint List electoral coalition, told Al Jazeera that Netanyahu wants “coexistence in which Jews are entitled [to] privileges over Arab citizens”. Jabareen says that Palestinians in Israel are a minority that is “excluded and discriminated against. We share in the struggle for an independent Palestinian state, and cannot accept inferior status in our homeland”.