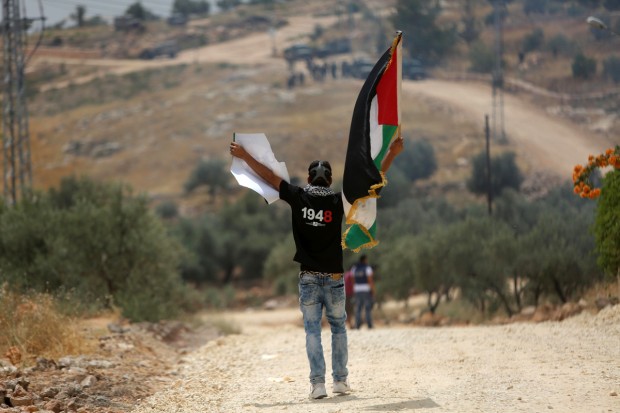 Above: A Palestinian protester holds a Palestinian flag during clashes with Israeli troops at a protest ahead of Nakba day, in the West Bank village of Bilin near Ramallah May 13, 2016. (Photo: Shadi Hatem/ APA Images)

Dima al-Wawi knows what she wants to be when she grows up:  “My dream is that when I grow up I can be a lawyer who can defend children who have been oppressed,” the twelve-year old said in an interview shortly after her release from a four-month sentence in an Israeli jail.

Al-Wawi will likely be extremely busy:  at any time in the past few years, Israel has held anywhere from 400 to 700 children in its prison cells, where physical and psychological torture are routine, adding injury to the insult of being arrested strictly because one is Palestinian.

Israel’s oppression of the Palestinian people seems indeed relentless. The gloves have come off, the masquerade of the peace talks is finally seen by most as a futile waste of time, as Israel bares its unadorned face as an expansionist settler-colonial state.  Thus the new deputy foreign minister recently declared “this land is ours. All of it is ours,” while a growing number of Israeli politicians finally acknowledge what Palestinians have been saying for years:  it is apartheid.

May 15 is observed annually as “Al Nakba Day,” and groups all around the globe hold actions and events to commemorate the fateful months of 1947-48.  We name the villages that were destroyed, erased of the map, to allow for Israel to become a “Jewish homeland” in historic Palestine.  We speak of the refugees, still in exile.  But Al Nakba is not a memory, it is an ongoing daily reality.  Sixty-eight years into our catastrophe, Palestinians in the West Bank are still losing towns, homes, land, olive groves, to the Zionist settlers.

Within Israel, Palestinian villages are still being demolished in the Negev desert.  Innocent civilians are being detained, tortured, executed by Israeli soldiers and citizens, with no accountability. The Gaza Strip, one of the most densely populated areas in the world, is still in a stranglehold.  And refugees are still languishing in camps throughout the region, many displaced multiple times.

And still we persist, maintaining our right to freedom, dignity, self-determination.  Our strategy, BDS, is so effective that Israel is trying desperately to stem it by threatening prominent activists with civilian assassination and/or exile.  Yet as BDS co-founder Omar Barghouti asserted, upon being denied a travel permit: “I am unnerved but certainly undeterred by these threats. Nothing will stop me from struggling for my people’s freedom, justice and peace.”

And daily, along with the horrific news of ongoing oppression and dispossession, we get empowering reports of campaign successes, a growing number of allies joining our struggle, more voices speaking out. We know ours is a just cause, a moral cause, and that knowledge, that certainly, sustains us.   So we continue to resist, to heed the call of Palestinian poet Dareen Tatour, who urges us, from her house arrest, to “resist, my people, resist them.”

And from London, England, Salman Abu Sitta reminds us in his recently published book,Mapping My Return:  “It is the determined will of people that counts. It must of course be accompanied by vigorous planning and action. An iron will does not bend in the face of obstacles or challenges, failures or disappointments. These challenges only sharpen it. Its ultimate reward is to enforce justice, to return home.”

Young and old, in the homeland and the diaspora, we are undeterred, determined, we have not given up, we continue the struggle.  We are millions, and our numbers are growing daily. Our persistence has changed the political landscape in the US too.  This is evident in everyday discourse among activists, and even more among “liberal Democrats,” a majority of whom now sympathize more with the Palestinians over Israel.

The shift in attitude towards Israel is extremely significant, because of the political immunity the US offers Israel, an immunity that is beginning to crumble and fritter away at the grassroots level, where “radical” change begins. Thus the battle has also expanded, from on the ground in Palestine, to the global intifada that is BDS.

Our struggle, our losses, our suffering, are not over.  But our successes are also accumulating.  Along with the shift in discourse, Palestinian activists, thinkers, organizers are planning for what comes next, for a future when we finally have self-determination, for the welcome responsibility of running our own affairs.  Many of the conferences we now organize, as well as the books we are writing, are focused on that vision.  A conference later this month in England will be discussing the One Democratic State (all of historic Palestine).

Books such as Abu Sitta’s Mapping My Return are laying out the pragmatic author’s vision for the sovereign nation that will arise from the ashes of Israeli apartheid.  Earlier ground breaking  books like Ali Abunimah’s One Country, and Mazin Qumsiyeh’s Sharing the Land of Canaan, had shown us the possibility of co-existence after the success of co-resistance.   Numerous Palestinian civilians are involved in creating an infrastructure that empowers Palestinians now, as well as in the future.  The 1for3 water rights group is one example, of doing remedial work now while planning for a better future, as well as novelist Susan Abulhawa’s Playgrounds for Palestine.

Al-Qaws offers a radical, anti-colonial vision for a “more vibrant and just” society where individuals are not criminalized for any accident of birth.

Readers are welcome to name other such organizations in the comments section, we need to be aware of these necessary initiatives, so as to support them now.

It is not too soon.

This year, as we commemorate al Nakba yet one more time, as we remind the world that our catastrophe is ongoing, let us also act upon the belief that merely speaking out against injustice is not enough. “Demonstrations” are not enough.  BDS is a means to an end:  liberation, the abolition of apartheid, the return of the refugees.  We are approaching this end, and must look beyond it.  As we approach the finish line, we must also listen attentively to pragmatic visionaries such as Abu Sitta, the members of Al-Qaws, and engage in productive discussions about the best ways to forge our new nation, as we map our return to a homeland finally rid of injustice.