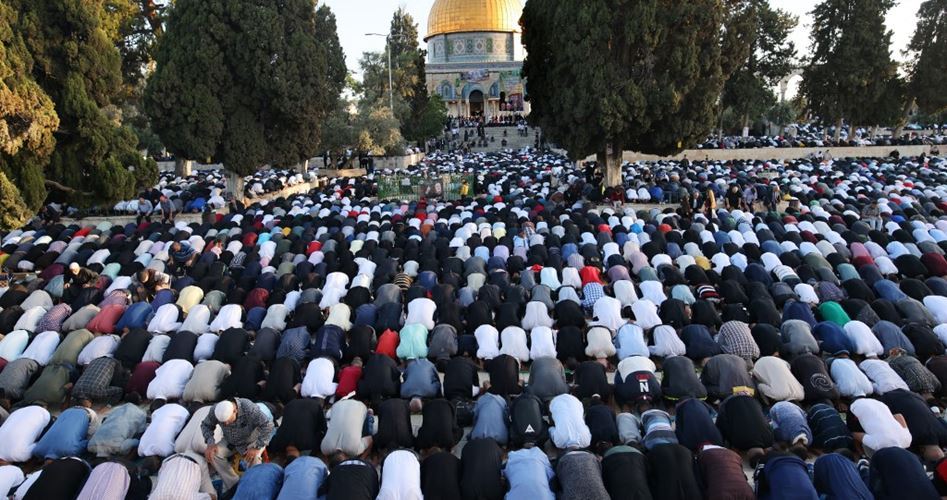 Above photo: Worshippers pray at Al Aqsa Mosque on Eid in Jerusalem. From the Palestinian Information Center.

Despite the recent escalation of attacks on Palestinian Muslims worshipping at Al Aqsa Mosque in Jerusalem, tens of thousands of people attended prayers for Eid on Thursday, as the Palestinian Information Center reports:

Occupied Jerusalem – Tens of thousands of Muslim worshipers on Thursday morning observed the Eid-ul-Fitr prayer and khutba (sermon) at the Aqsa Mosque and then rallied in its courtyards in support of the Palestinian resistance in the Gaza Strip.

According to the Islamic Awqaf Administration, over 100,000 worshipers performed the Eid prayer at the Mosque.

Palestinian citizens of all ages started flocking to the Mosque in the early morning hours to perform the Fajr and Eid prayers.

Following the Fajr and Eid prayers, thousands of young people rallied in the Mosque’s courtyards and chanted slogans for the Palestinian resistance, Gaza, Jerusalem and the Aqsa Mosque.

The preacher criticized the Arab League for its weak position over Jerusalem events and attacked the last Arab normalization deals with the Israeli occupation, affirming that the Palestinian people would not condone any deal targeting the Aqsa Mosque.

This happened following a wave of brutal attacks by Israelis against Palestinians in multiple cities, according to the Middle East Monitor:

Clashes occurred between Israeli occupation forces and Palestinians in the central city of Lod, according to witnesses. Hundreds of extremists attacked homes belonging to Arab Israelis in Lod.

Israel imposed a curfew in the Arab-majority city of Lod on Wednesday after clashes erupted between security forces and Arab-Israeli Palestinians regarding tensions in Jerusalem and Gaza.

And the number of Palestinians who have been killed rises to 65 as Israel is wages its most destructive assault yet on the people of Gaza, leveling apartment buildings and targeting infrastructure, as the Palestinian Information Center documents:

The government press office in Gaza said that the Israeli aggression against Gaza, which started on Monday, resulted in great financial losses and extensive destruction to infrastructure, homes and services.

According to statistics released by the press office, over 500 houses, apartment complexes, residential buildings sustained total or partial destruction and another 1,000 housing units were moderately or slightly damaged during the ongoing Israeli aggression.

Two large apartment complexes were reduced to rubble by Israeli airstrikes. One of those destroyed buildings contained offices belonging to 12 media outlets.

Over 50 civilian vehicles were either partially or completely destroyed in the aggression.

Protests in solidarity are taking place around the world. Find one near you here.