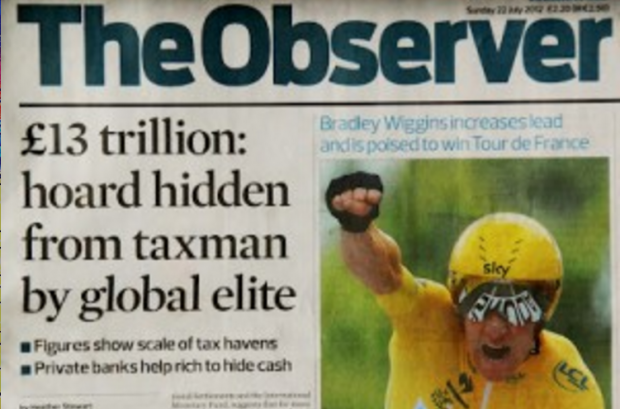 Panama Papers’ And The Shadow World Of Finance

Note: On Monday, April 11, 2016, on Clearing The FOG Radio, Margaret Flowers and Kevin Zeese discussed the release of the ‘Panama Papers’ which provide a glimpse of the secret world of shell companies used by the rich to hide their wealth and avoid paying taxes. We explore what’s going on with James Henry of the Tax Justice Network and Chuck Collins of the Institute for Policy Studies.

It is time for Congressional action to ensure tax justice and stop the hiding of trillions of dollars of individual and corporate wealth in “offshore” accounts in the more than 90 countries and US states such as Delaware, Nevada and Wyoming that serve as tax havens.

According to a study by the Tax Justice Network (see article below), a conservative estimate of up to $32 trillion in global assets have been invested virtually tax-free in the international ‘offshore economy’ – nations or jurisdictions whose laws allow asset holders to remain anonymous and avoid tax obligations. This is equivalent to the size of the two of the top three largest global economies, the United States and Japan.

Among the action to curb the practice of hiding taxable income, including:

Popular Resistance rejects repatriation tax holidays that give amnesty to multinational corporations and reinforce their misbehavior. They should pay their back taxes which were avoided as well as fines for the illegal activity.

At least $21 trillion of unreported private financial wealth was owned by wealthy individuals via tax havens at the end of 2010. This sum is equivalent to the size of the United States and Japanese economies combined.

We consider these numbers to be conservative. This is only financial wealth and excludes a welter of real estate, yachts and other non- financial assets owned via offshore structures.

The research for the Tax Justice Network (TJN) by former McKinsey & Co Chief Economist James Henry comes amid growing concerns about an enormous and growing gulf between rich and poor in countries around the globe. Accompanying this research is another study by TJN, entitled Inequality: You Don’t Know the Half of It, which demonstrates that all studies of economic inequality to date have failed to account properly for this missing wealth. It concludes that inequality is far worse than we think.

Henry draws on data from the World Bank, the IMF, the United Nations, central banks, the Bank for International Settlements, and national treasuries, and triangulates his results against datareflecting demand for reserve currency and gold, and data on offshore private banking studies by consulting firms and others.

Other main findings of this wide-ranging research include:

• Our analysis finds that at the end of 2010 the Top 50 private banks alone collectively managed more than $12.1 trillion in cross-border invested assets for private clients, including their trusts and foundations. This is up from $5.4 trillion in 2005, representing an average annual growth rate of more than 16%.

• The three private banks handling the most assets offshore on behalf of the global super-rich are UBS, Credit Suisse and Goldman Sachs. The top ten banks alone commanded over half the top fifty’s asset total – an increased share since 2005.

• The number of the global super-rich who have amassed a $21 trillion offshore fortune is fewer than 10 million people. Of these, less than 100,000 people worldwide own $9.8 trillion of wealth held offshore.

• If this unreported $21-32 trillion, conservatively estimated, earned a modest rate of return of just 3%, and that income was taxed at just 30%, this would have generated income tax revenues of between $190-280 bn – roughly twice the amount OECD countries spend on all overseas development assistance around the world. Inheritance, capital gains and other taxes would boost this figure considerably.

• For our focus subgroup of 139 mostly low-middle income countries, traditional data shows aggregate external debts of $4.1 tn at the end of 2010. But take their foreign reserves and unrecorded offshore private wealth into account, and the picture reverses: they had aggregate net debts of minus US$10,1-13,1 tn. In other words, these countries are big net creditors, not debtors. Unfortunately, their assets are held by a few wealthy individuals, while their debts are shouldered by their ordinary people through their governments.

“This new report focuses our attention on a huge “black hole” in the world economy that has never before been measured – private offshore wealth, and the vast amounts of untaxed income that it produces. This at a time when governments around the world are starved for resources, and we are more conscious than ever of the costs of economic inequality.”

“Using several independent estimation methods, and the most comprehensive data set ever assembled, we have been able to triangulate on the size and growth of this black hole. Despite taking pains to err on the conservative side, the results are astonishing.”

“First, this hidden offshore sector is large enough to make a significant difference to all of our conventional measures of inequality.”

“Since most of missing financial wealth belongs to a tiny elite, the impact is staggering. For most countries, global financial inequality is not only much greater than we suspected, but it has been growing much faster.”

“Second, the lost tax revenue implied by our estimates is huge. It is large enough to make a significant difference to the finances of many countries, especially developing countries that are now struggling to replace lost aid dollars and pay for climate change. Indeed, once we take these hidden offshore assets and the earnings they produce into account, many erstwhile “debtor countries” are in fact revealed to be wealthy. But the problem is, their wealth is now offshore, in the hands of their own elites and their private bankers. Indeed, the developing world as a whole has been a significant CREDITOR of the developed world for more than a decade. That means this is really a tax justice problem, not simply a “debt” problem.”

“Third, it turns out that this offshore sector – which specializes in tax dodging – is basically designed and operated, not by shady no-name banks located in sultry islands, but by the world’s largest private banks, law firms, and accounting firms, headquartered in First World capitals like London, New York, and Geneva. Our detailed analysis of these banks shows that the leaders are the very same ones that have figured so prominently in government bailouts and other recent financial chicanery.

“Fourth, given all this, it is scandalous that official institutions like the Bank for International Settlements, the IMF, the World Bank, the OECD, and the G20, as well as leading central banks, have devoted so little research to this sector. This scandal is made worse by the fact that they already have much of the data needed to estimate this sector more carefully. For reasons of their own, they have tolerated the growth of the offshore sector for far too long, out of sight. It is time for them to live up to their promises, and work with us on concrete policies to get it under control.

“From another angle, this study is really good news. The world has just located a huge pile of financial wealth that might be called upon to contribute to the solution of our most pressing global problems. We have an opportunity to think not only about how to prevent some of the abuses that have led to it, but
also to think about how best to make use of the untaxed earnings that it generates.”

Read the report: The Price of Offshore, Revisited