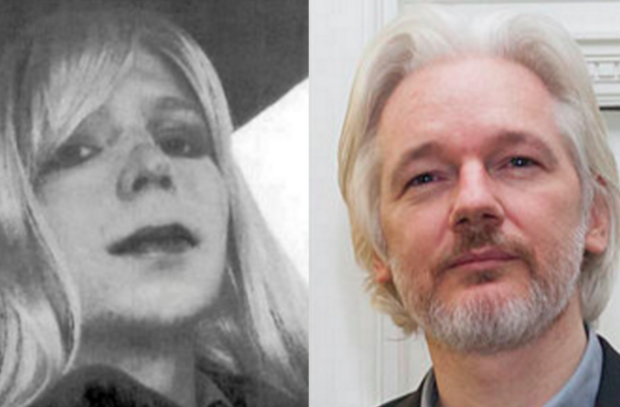 Above Photo: Chelsea Manning and Julian Assange irresponsibly helped overthrow the dictators of Tunisia and Egypt and end the occupation of Iraq.

Why then, in this moment of well-earned glory, would the primary party responsible for this act of journalism go out of its way to take a swipe atWikiLeaks, and, by extension, a prisoner of conscience?

Ryle says that the media organizations have no plans to release the full dataset,WikiLeaks-style, which he argues would expose the sensitive information of innocent private individuals along with the public figures on which the group’s reporting has focused. “We’re not WikiLeaks. We’re trying to show that journalism can be done responsibly,” Ryle says. He says he advised the reporters from all the participating media outlets to “go crazy, but tell us what’s in the public interest for your country.”

Some quick background: In 2010, military intelligence analyst Chelsea Manning leaked a cache of documents to WikiLeaks, the whistleblowing enterprise led by Julian Assange, leading to a number of stories exposing the dark side of both the United States and its allies. The documents mostly consisted of State Department cables that showed the cynical inner workings of US activities overseas, the “Afghanistan War Diary”  and “Iraq War Logs” that showed the Pentagon had been lying about the number of civilians casualties, and the “Collateral Murder” video that showed a US Army Apache helicopter in Iraq firing on a group of innocent people in Baghdad, including journalists from Reuters.

Manning was quickly arrested, held in conditions the UN special rapporteur on torture called “inhuman and degrading treatment,” and ultimately sentenced to 35 years in prison. Her leaks uncovered torture, abuse, diplomatic duplicity, the killing of innocent civilians and a whole host of unseemly and potentially illegal behavior—the revelation of which was of tremendous public value. So why, one is compelled to ask, would the director of the ICIJ—no doubt basking in a career high—go out of his way to call what Manning and WikiLeaks did “irresponsible”?

The implication of calling WikiLeaks irresponsible is that Manning’s leaks somehow harmed innocent people. The problem is there is no evidence of this ever happening. Despite multiple attempts by the United States government and its media allies to show otherwise, an internal review by the Pentagon found “no instances…of any individual killed by enemy forces as a result of having been named in the releases.”

The idea that the Manning leaks ever harmed any innocents is entirely a fiction that was promoted early on and never went away. It’s a shame to hear ICIJ heavily imply it, and to see Wired publish it without question. The reality is that Assange, WikiLeaks and their media partners redacted thousands of documents and released only a fraction of the total received, despite the cartoon “bulk dump” media narrative that insisted otherwise.

There is, however, ample evidence that the Manning leaks not only contributed to the ousters of US-backed dictators in Tunisia and Egypt, but also expedited the end of the US’s official occupation of Iraq. It’s a complicated tale, but one worth noting, given the constant recriminalization of Manning and the oft-short memories of our pundit class.

It’s well-known that Obama’s “withdrawal” from Iraq at the end of 2011 was negotiated between the US and Iraq during the Bush administration. What most people don’t know is that Obama and then-Secretary of Defense Leon Panetta wanted to delay the pull-out and keep a “residual force” of 30,000 American troops in Iraq. The US troops, though, required immunity granted to them by the Iraqi government. This condition was a political deal breaker for the Iraqi congress—already teetering on the edge of illegitimacy—since only months earlier, the Manning leaks and subsequent follow-up reports had blown the lid off the summary execution of ten Iraqi civilians. As Slate (6/4/13) recapped in 2013 (emphasis mine):

A leaked diplomatic cable provided evidence that during an incident in 2006, US troops in Iraq executed at least 10 Iraqi civilians, including a woman in her 70s and a five-month-old, then called in an airstrike to destroy the evidence. The disclosure of this cable was later a significant factor in the Iraqi government’s refusal to grant US troops immunity from prosecution beyond 2011, which led to US troops withdrawing from the country.

Belittling someone serving 35 years in prison for an act of whistleblower bravery is both unnecessary and harmful, and comes off as little more than an attempt to ingratiate oneself to an elite that is never going to like whistleblowers, no matter how PR-savvy they may be.

“There have been some times when WikiLeaks could have done a better job redacting,” Chase Madar, who chronicled Manning’s trial and the WikiLeaksfallout in The Passion of Chelsea Manning, told FAIR. “But the harm from these lapses has been minimal. Overall WikiLeaks has done a terrific job, and they have done the world a great service. Dumping on them does not serve the long-term interests of ICIJ or transparency in general.”

CORRECTION: This post originally stated that Chelsea Manning’s sentence carried no possibility of parole. Actually, she will be eligible for parole in 2020.