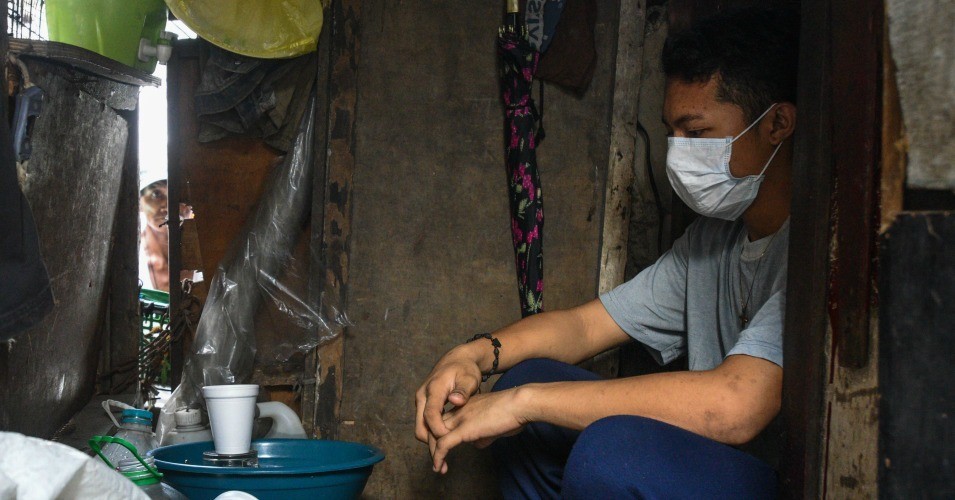 Above photo: A man wears a face mask as a preventive measure against the spread of the Covid-19 in Manila, Philippines on March 18, 2020. Maria Tan via Getty Images.

“Early evidence also suggests that the crisis is poised to increase inequality in much of the world,” says the new World Bank report.

Amid findings that the combined wealth of the planet’s billionaires skyrocketed to $10.2 trillion during the coronavirus pandemic, the World Bank warned Wednesday that the public health crisis could cause global extreme poverty to rise for the first time in over two decades and push tens of millions of people into that category by next year.

“Between 88 million and 115 million people could fall back into extreme poverty as a result of the pandemic, with an additional increase of between 23 million and 35 million in 2021, potentially bringing the total number of new people living in extreme poverty to between 110 million and 150 million,” the report says. “Early evidence also suggests that the crisis is poised to increase inequality in much of the world.”

Entitled Poverty and Shared Prosperity 2020: Reversals of Fortune (pdf), the report discusses the impacts of not only Covid-19 but also armed conflict and climate change, finding that the latter “may drive about 100 million additional people into poverty by 2030, many of whom reside in countries affected by institutional fragility and armed conflict, and where global extreme poverty is increasingly concentrated.”

Main threats to poverty reduction:
😷#COVID19 is expected to push up to 115 million people into extreme poverty in 2020
💥Conflict has displaced almost 80 million people
🍃Climate change will drive between 68 and 132 million into poverty by 2030https://t.co/8Qj6UJwdmg

The World Bank defines extreme poverty as living on less than $1.90 a day but also measures poverty lines of $3.20 and $5.50 for middle-income countries. The report says that had the pandemic not occured, the global extreme poverty rate was expected to drop to 7.9% this year. However, given current conditions, extreme poverty could now affect over 9% of the world’s population.

Reporting on the bank’s projections Wednesday, BBC News captured the anticipated uptick in a chart that shows the global extreme poverty rates since 1990: 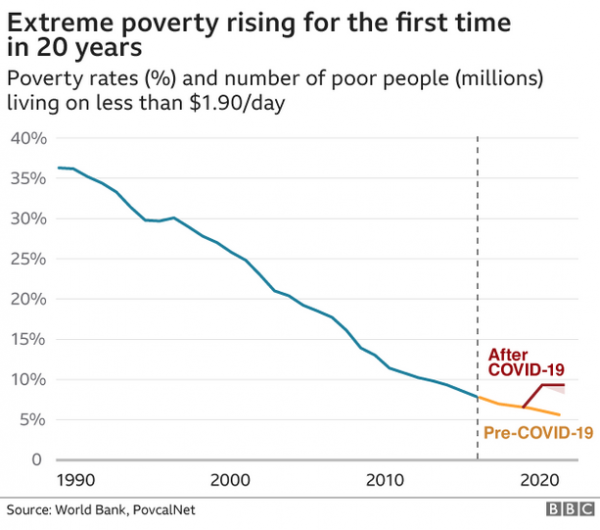 “Many of the new poor are likely to be engaged in informal services, construction, and manufacturing—the sectors in which economic activity is most affected by lockdowns and other mobility restrictions,” according to the report—which also predicts that more than 80% of the world’s new poor will be in middle-income countries such as India and Nigeria.

“The pandemic and global recession may cause over 1.4% of the world’s population to fall into extreme poverty,” said World Bank Group president David Malpass. “In order to reverse this serious setback to development progress and poverty reduction, countries will need to prepare for a different economy post-Covid, by allowing capital, labor, skills, and innovation to move into new businesses and sectors.”

In the report’s foreword, Malpass wrote:

This report provides new evidence on emerging “hot spots,” where multiple threats to poor people’s lives and livelihoods converge. Many of these hot spots are in Sub-Saharan Africa, a region now expected to be home to about a third of the people who are newly impoverished by Covid-19. The World Bank Group has stepped up its support for regions in which extreme poverty is increasingly concentrated, armed conflict is disproportionately prevalent, and large populations face severe risks linked to climate change, from flooding to locust swarms. We are working on a multitude of urgent issues, including food support, digital connectivity, and equitable access to Covid-19 diagnostics, therapeutics, and vaccines.

As we look beyond immediate responses to the pandemic, policymakers should remain attentive to broader development challenges. Even before the pandemic, development for many people in the world’s poorest countries was too slow to raise their incomes, enhance living standards, or narrow inequality. During the recovery period, nations must look to reengage with a longer-term development agenda that includes promoting sustainable and inclusive growth, investing in human capital, and improving the quality of public administration and services while upholding political legitimacy, and ensuring that debt levels remain both manageable and transparent.

Anti-poverty advocates responded to the report with calls for governments and international bodies to work harder to aid the world’s poor and implement policies that address the root causes of their conditions.

“The World Bank’s report shows clearly that billions of people were more vulnerable to the economic impacts of Covid-19 because of decades of economic policies which have kept them living one paycheck away from poverty, while the richest in society accumulate ever more wealth,” declared Max Lawson, Oxfam International’s head of inequality policy.

“The figures are a damning indictment of the failed economic policies that will push hundreds of millions more people into destitution during this pandemic,” added Lawson. “Urgent action must be taken to protect labor rights, boost social safety nets, and deliver a fairer tax system to close the gap between the richest and the rest.”

In April, as Common Dreams reported at the time, Oxfam had warned that the pandemic could push half a billion people worldwide into poverty and called for wealthy economies to not only cancel $1 trillion in debts from developing nations but also to issue a $1 trillion stimulus package for those countries.