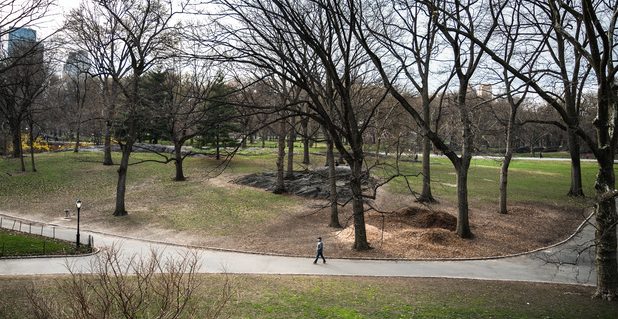 Pandemic: Protecting Public Health And The Right To Free Speech And Assembly

Above photo: A man wearing a mask walks along an empty path in Central Park. Ryland West.

New Yorkers are allowed to go out with masks and stay at least 6 feet apart, as long as it is to go shopping or sit in a park, but if they are adhering to those requirements and say something about an issue of public concern, that speech will make the speaker subject to arrest on the specious basis that speech is a public health risk.

COVID-19 is the single greatest health crisis America has faced in a century. Government officials have a strong interest in protecting the health and safety of residents, especially during a pandemic. At the same time they have, at a minimum, a heightened obligation to protect the right to free speech and assembly, including peaceful protests and press conferences in public spaces.

On May 3, members of Reclaim Pride, an LGBT+ organization, planned to hold a press conference to protest the city and state’s association with a group that required agreeing to a “Statement of Faith” affirming “marriage is exclusively the union of one genetic male and one genetic female” as a precondition to employment. Participants in the press conference wore face masks and were at a social distance of at least 6 feet from one another, but members of the NYPD informed them it was an “unlawful gathering” under executive orders issued by both the governor and mayor and ordered them to disperse or be subject to arrest. A summons for “Violating an Emergency Measure by Mayor” was issued to two participants.

The consequence of this Orwellian action by New York City is that New Yorkers are allowed and encouraged to go out in the street with masks and stay at least 6 feet apart, as long as it is to stand in line to go shopping or to sit in a park, but if they are adhering to those requirements and they say something about an issue of public concern (similar to what members of Reclaim Pride did) that speech will make the speaker subject to arrest on the specious basis that speech is a public health risk. Banning that speech/protest while permitting the same activity without speech is unconstitutional. The president of the Sergeants Benevolent Association recently wrote to the police commissioner stating that: “This week the mayor announced an end to public protests in the city….the SBA believes that such a sweeping prohibition against the rights embodied by the First Amendment is glaringly unconstitutional.”

Can free speech and public health be reconciled? And if yes, how can it be done?

Reviewing U.S. Supreme Court decisions that set forth specific principles is a first step in finding a balance that honors the principles of the First Amendment. First, government executive orders, policies and instructions need to be content neutral and must be predicated on reasonable time, place and manner regulations. Second, those regulations must be “narrowly tailored to serve a significant government interest .” And third, they must leave “ open ample alternative channels of communications. ”

To date, New York and California executive orders and policies set forth by a governor, mayor and/or law enforcement officials have resulted in banning/suspending First Amendment protected political protests during the COVID-19 period. In contrast, in Ohio, an executive order classifies “First Amendment protected speech“ as essential business and exempts that activity from a stay at home requirement. In Michigan, Governor Whitmer stated “ everyone has a right to protest and speak up….We ask those who choose to protest… do so in a manner that doesn’t put their health or the health of our first responders at risk.”

The right to peaceful protest, even in a pandemic, needs to be respected because it is a core principle that is embedded in the foundation of American democracy. Today, peaceful protest groups calling for change on the shooting death of Ahmaud Arbery in Georgia, the Justice Department’s dropping its prosecution of Michael Flynn, lockdowns, social distancing enforcement or services in houses of worship need to be able to have their voices heard, even if we disagree with their message.

An executive order issued by the governor of New York provides “ non-essential gatherings of individuals of any size for any reason (e.g.. parties, celebration or social events) are canceled or postponed at this time.” A New York City mayor’s executive order provides “in order to avoid the mass congregation of people in public places and to reduce the opportunity for the COVID-19 …” and then mirrors the governor‘s executive order language. The right to free speech and peaceful assembly is not mentioned in either executive order. Nevertheless, the NYC mayor and police commissioner have interpreted the executive orders to include First Amendment protected activity and deemed First Amendment activity as “non-essential.” The analysis is flawed because (1) they would ban peaceful protest but not create reasonable alternatives that would protect public health with fewer restrictions on free speech and (2) First Amendment peaceful protest is an “essential” activity.

Governors and mayors should remediate this conflict by setting forth a clear reasonable time place and manner policy that provides that gatherings in which participants wishing to engage in political speech/protest can do so provided that they wear protective face masks and are at a distance of at least 6 feet from each other. Such a policy would not be overly broad but in fact narrowly tailored and allow for speech and assembly that does not create a risk of spreading the COVID-19 virus. It would respect and protect free speech and public health.

Norman Siegel and Steven Hyman are attorneys and respectively a former executive director and chairman of the board of directors of the New York Civil Liberties Union.