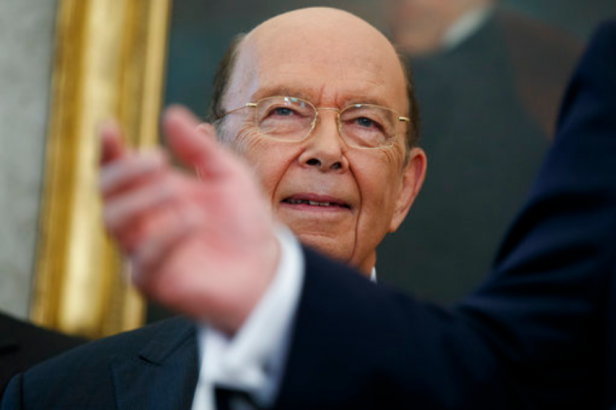 Above Photo: Secretary of Commerce Wilbur Ross, one of the figures “the Paradise Papers” focuses on, speaking with President Trump in the Oval Office in October. (Evan Vucci / AP)

A trove of recently leaked files pertaining to offshore finance, dubbed “the Paradise Papers,” offers insight into how the wealthiest corporations and individuals protect their riches. The documents also show financial ties to Russia of a member of President Trump’s Cabinet.

The 13.4 million files were obtained by the German newspaper Süddeutsche Zeitung and subsequently shared with the International Consortium of Investigative Journalists (ICIJ), which has been investigating offshore finance for several years.

According to a New York Times report, Appleby, an offshore firm at the center of the documents, said it has “thoroughly and vigorously investigated the allegations and we are satisfied that there is no evidence of any wrongdoing, either on the part of ourselves or our clients.”

The ICIJ said Sunday in a post announcing the release of the papers that they “reveal offshore interests and activities of more than 120 politicians and world leaders.” The papers include data on U.S. Commerce Secretary Wilbur Ross, Secretary of State Rex Tillerson, chief economic adviser Gary Cohn, major donors to the Trump campaign and a business associate of the president’s son-in law, Jared Kushner. The papers also reveal financial activity and investments by Queen Elizabeth II, Bono, Apple, Nike and Facebook. The New York Times lists other notable revelations from the documents:

Behind one of Silicon Valley’s most prominent investors, Yuri Milner, was hundreds of millions of dollars in Kremlin funding. The documents show that Mr. Milner’s investment in Twitter relied on money from VTB, [a] bank controlled by the Russian state. One of his most significant investors in Facebook relied on funding from Gazprom Investholding, another government-controlled institution. Mr. Milner is also an investor in Cadre, a New York-based real estate technology company founded by Jared Kushner, President Trump’s son-in-law and White [House] adviser.

Apple has come under scrutiny by Congress for shifting much of its earnings to Irish subsidiaries, avoiding income taxes. Documents from the leak show that after its chief executive, Tim Cook, said that the company didn’t just “stash money on a Caribbean island,” it found a new tax haven—an island in the English Channel. The use of complex offshore structures have helped keep much of Apple’s more than $128 billion in profit abroad free from taxation. …

Wilbur Ross, the commerce secretary, invested in a shipping company whose top clients include a Russian firm controlled by an oligarch facing sanctions and President Vladimir V. Putin’s son-in-law. The ethics agreement Mr. Ross filed when taking office said he intended to retain several investment partnerships, but did not specify that they were used to hold his stake in the shipper, Navigator Holdings.

The revelations about Ross prompted Sen. Richard Blumenthal, a Connecticut Democrat, to call for an investigation into the investments. The New York Times reports that “much” of Ross’ wealth is tied up in secretive offshore dealings.

Vermont Sen. Bernie Sanders, in a statement to The Guardian, said that the papers demonstrate that the world has turned into an “international oligarchy” controlled by a minute number of billionaires. “The major issue of our time is the rapid movement toward international oligarchy, in which a handful of billionaires own and control a significant part of the global economy,” he said. “The Paradise Papers shows how these billionaires and multinational corporations get richer by hiding their wealth and profits and avoid paying their fair share of taxes.”

Sanders … pointed the finger of blame for the flourishing of offshore holdings on both Congress and the Trump administration. He told the Guardian that Republicans in Congress were responsible for providing “even more tax breaks to profitable corporations like Apple and Nike”.

The same tax breaks, he said, were being seized upon by super-wealthy members of Trump’s cabinet “who avoid billions in US taxes by shifting American jobs and profits to offshore tax havens. We need to close these loopholes and demand a fair and progressive tax system”.

Senate Democratic Minority Leader Chuck Schumer and Senate Finance Committee member Ron Wyden also spoke about the significance of the papers’ revelations and blamed the Republican Congress for failing to close loopholes revealed by the leaks:

As a result Republicans were rewarding, the duo said, “wealthy billionaires like secretary Wilbur Ross for dodging taxes, while punishing many in the middle class with new tax hikes. If you deduct medical expenses or student loan interest from your taxable income, the Republican plan comes after your wallet. But if you stash your billions in secret bank accounts overseas, their plan gives you the green light to keep doing what you’ve been doing.”

They added that the Paradise Papers were “proof positive that the Republican tax plan favors the wealthy and betrays the middle class in this country, who are the ones left carrying the financial burden of massive corporate tax avoidance”.

The Paradise Papers release has been compared with the Panama Papers, which, in 2016, exposed celebrities and business executives who moved large amounts of money into offshore accounts. Setting up offshore companies is generally legal, and to do so is often attractive to corporations handling mergers and acquisitions.