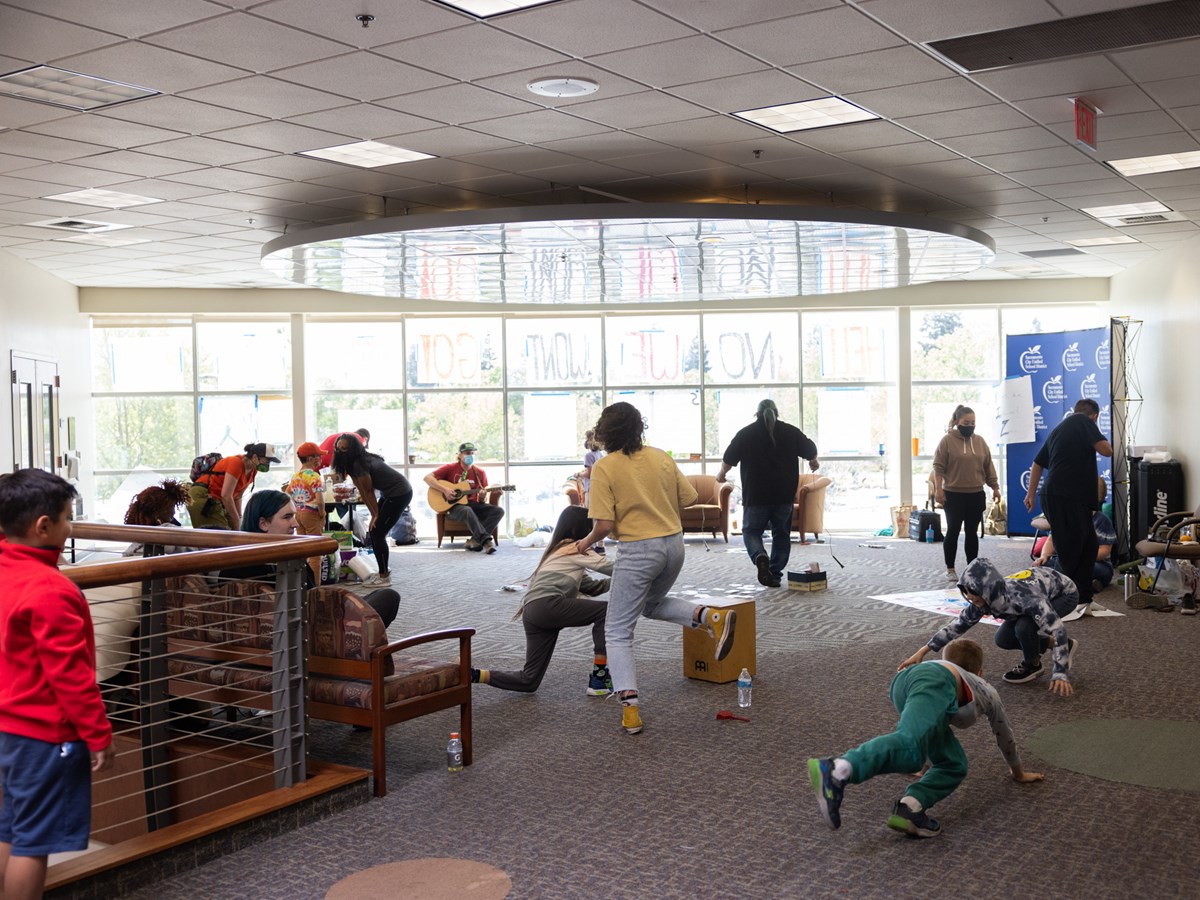 Parents And Students Sit-In In Solidarity With Striking Teachers

NOTE: The strike ended today according to the Sacramento Bee:

The teacher strike that has shut down schools in the Sacramento City Unified School District for eight days is over.

District and union officials said Sunday that an agreement had been reached between the district, the classified employee union SEIU Local 1021 and the Sacramento City Teachers Association.

“Schools will reopen for our students on Monday, April 4,” district officials wrote to families in a Sunday night email. “School bus transportation schedules will also resume as usual. We encourage all families to send students back to school tomorrow.”

“We can’t wait to see your students and welcome them back,” the district added. “We’ve prepared social emotional learning strategies to support our school community as we recover from the impacts of school closures.”

The deal also addresses teacher health benefits, which have been a point of contention for years between the district and union.

In Sacramento, parents and students are organizing sit-ins to support their teachers, who are on strike for higher pay and increased staffing.

Sacramento, California – In an incredible show of solidarity, Sacramento parents and students have organized a sit-in to support striking teachers and support staff. Parents have been camping out at district headquarters in the Serna Center, calling for the school board to meet with teachers and reach an agreement. They are watching movies and playing board games, and have vowed to continue the sit-in until the district takes action. These community-led tactics demonstrate the interconnectedness between teachers and their communities.

Since March 23, 4,000 educators in Sacramento have been on strike demanding higher pay in pace with inflation, increased staffing in their schools, no cuts to health benefits, and improved support for students. These educators and staff have gone without pay since the strike began and many of the lowest-paid staff members are struggling to make ends meet. Yet these workers are holding out and keeping up the fight, keenly aware that their fight is not only their own, but also that of their students and community.

On the first day of their strike, at least 25,000 people gathered in support. On Thursday, 80 teachers and staff members took over the district office’s cafeteria, vowing to stay put until the district met and negotiated a contract. On Friday, members of the workers’ bargaining team waited for ten hours to be joined by the district bargaining team.

Parents April Ybarra and Amber Verdugo have been leaders in the sit-in efforts, and gave moving speeches on Saturday showing their unwavering commitment to the struggle. Ybarra, who has been camping out in solidarity with the teachers, talked about how it was her teachers who helped her find her voice in an educational system designed to fail her. “We are tired,” she shouted, “but we are not defeated!” In a powerful moment, the workers voted unanimously to admit Ybarra and Verdugo to the negotiation team.

The chants from the picket line reflect a deep hatred toward the Sacramento City Unified Superintendent Jorge Aguilar. Aguilar, whose salary exceeds $400,000 and has very little classroom experience, has refused to show up to the bargaining table for the past three years. Aguilar reportedly refused to meet with teachers over strike talks, even at the request of California Superintendent of Public Instruction.

The capitalist system is responsible for creating the overwhelming and understaffed working conditions at schools. There is never enough money for education, but there is always enough room in the budget to fund the police.

Sacramento City Unified School District is short staffed by 250 regular teachers and 100 substitute teachers. Students are dismayed at the lack of help that their teachers have if they become sick or need to take a day off. Phoenix Leri, a high school senior in the district, told Associated Press, “It’s a struggle for [teachers] to find someone to stand in and help our class. It’s honestly kind of jarring, I’ve never seen anything like it.”

Sacramento City Teachers Association (SCTA) and Service Employees International Union (SEIU) Local 1021 have been negotiating a contract with the district since 2019, and have been negotiating Covid-related issues since 2020. The pandemic has laid bare the contradictions faced by education workers: they are both indispensable to their communities, yet treated by their districts as expendable, as evidenced by nearly two years of unsafe reopening plans and massive budget cuts, including staff lay-offs. While teachers have been contracting Covid due to unsafe reopenings, now the district wants to make current and retired teachers pay hundreds more to keep a non-HMO health plan.

Larry Ferlazzo, a well-known English and social studies teacher in Sacramento, described district leaders’ indefensible decision to use Covid funds to opt for occasional one-time “bonuses” or “stipends,” while refusing to permanently increase staff wages, despite projections of increased state and local funding. Instead, funds were used to boost salaries of high-level administrators while there are unfilled teacher positions at just about every school, sub positions go unfilled, and already stressed staff are forced to cover classes during their free periods. Other districts have chosen to hoard funds rather than use them to hire much needed staff.

As we have also seen in Minneapolis, education workers have been taking the lead and are showing us how to fight back. Minneapolis students also organized a several-day sit-in in solidarity with teachers. And like their Minneapolis counterparts, Sacramento education workers, parents, students, and community members refuse to be pitted against each other and know their fight is one and the same. As they have been shouting in Sacramento: “When we fight, kids win!”

Both Sacramento and Minneapolis teachers are showing what it means to stand united with all of one’s co-workers, whether represented by the same union or not. In Minneapolis, teachers were standing side by side with the lowest-paid educational support professionals. In Sacramento, teachers are also fighting for support staff. As Ferlazzo wrote in his op-ed in Education Week, “teacher and custodian and paraprofessional and bus driver and school secretary working conditions are student learning conditions.”

The sub-par working conditions for education workers are not just a problem in Minneapolis or in Sacramento. A recent poll found that over half of teachers are considering quitting their jobs. Sacramento and Minneapolis are just the beginning. Unions across the country need to mobilize to make this fight a success and help teachers fight to defend public education nationwide. Leaders from teachers’ organizations such as the American Federation of Teachers (AFT) and support staff unions need to go all out and financially support the striking teachers. And we, as the working class, must put pressure on our unions to stand in solidarity with striking teachers across the country, and make our voices heard on the streets.

To support these striking teachers, contribute to the SEIU GoFundMe.