Parents Stand With Educators On Safety Before Reopening Schools

Many parents nationwide are questioning whether it’s safe to send their kids back to a brick and mortar school this fall. With varied life circumstances, and different districts and schools choosing different options, it’s a daunting decision to make.

For Florida’s Raquel Pantoja Lias, a mom of a rising fourth grader in Broward County, it’s a hard “no.”

Under an emergency order from the state education commissioner, most schools are scheduled to reopen on August 19 for in-person learning, five days a week, a plan supported by Gov. Ron DeSantis. Along with educators and parents, the Florida Education Association filed suit against state officials to safeguard the health and welfare of public school students, educators, and the community at large. The lawsuit intends to stop the reckless and unsafe reopening of public school campuses as coronavirus infections surge statewide.

The Florida governor has latched on to the claim that students have a lower likelihood of catching the virus and therefore schoolteachers must return to work. President Donald Trump and Education Secretary Betsy DeVos have made similar statements and have threatened to withhold federal funds from K-12 schools that don’t open for in-person learning.

“I don’t care what they say,” says Lias. “Is Donald Trump’s son going to school? No, but he wants to send everybody else’s kid back and risk their lives. Our kids are not experiments to see if reopening is going to work. So no, my daughter is not going into a school building to potentially die.”

This sentiment is a real concern for many Floridians. The state is now the new hot spot, given a surge of new coronavirus cases and hospitalizations. Between July 16 and 24, the number of new cases increased by 34 percent, from 23,170 to 31,150. Within the same eight-day period, the number of children hospitalized with coronavirus went from 246 to 303, a 23 percent increase.

And…kids are dying. As reported by several news outlets, on July 17, Kimora “Kimmie” Lynum, 9, died from Covid-19 complications. Kimmie became the fifth minor and the youngest in the state to die from the virus. Her family has said she had no underlying health conditions.

Lias wants to keep her daughter safe through distance learning, and recent national polls from The Navigator,  Axios and Quinnipiac show other parents want the same. According to The Navigator, “a majority of Americans, and parents, oppose reopening schools in the fall because of the risks, and nearly two in three parents say schools should be among the last things to reopen.”

How best to reopen schools—whether it’s in-person, hybrid, or virtual—is a much more complicated issue that’s going to require leaving behind the idea of going back to the “old normal.”

“We’re in the midst of a paradigm shift,” says Courtney Fox, a mom of a rising tenth grader in Arlington, Va. “It’s not one anybody chose. Covid chose it for us, and instead of fighting over trying to retain as much of the old normal as possible, we need to embrace this opportunity to reinvent schools and create a better future.” 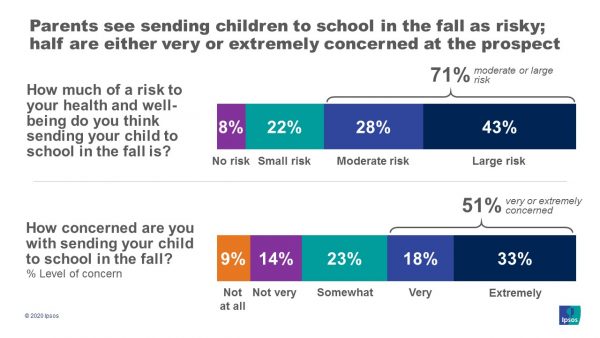 The coronavirus has magnified inequities that have existed in schools across the country for decades, hurting students along the way: lack of devices or no home internet, inadequate access to specialized support services (special education and mental health), food deficits, housing instability, and more.

Courtney Fox saw some of these inequities within Arlington Public Schools (APS) when her youngest daughter couldn’t adequately access special education services, resulting in her transfer to a private school. When it came to exploring reopening options for her eldest daughter today, Fox realized now is the time to reimagine public schools so it’s better for every student.

“If we do online learning right, our kids will be learning,” Fox says, “and I’m not just talking about teaching them history and math. This is about community building , social-emotional [development], and equity.”

Many school districts around the nation have taken a slow approach to reopening school buildings, starting with distance learning first, while allowing only some students with special needs to enter school buildings, and then reevaluating later in the year.

In Arlington, Va., the approach is a yearlong, two-tiered system, with each tier starting the year online. This bifurcated system, Fox worries, would be separate, unequal, and inequitable.

In mid-July, APS announced its two-model approach: 1) full-time distance learning or 2) a hybrid model in which two groups of students would each attend school two days per week, wear masks, and practice social distancing.

Fox found this split would create two master schedules and run two separate school systems, carrying the potential to fracture the Arlington school community. “Imagine the kids who are virtual who come back to their home schools a year from now and feel like outsiders, [and] the hybrid kids who are going to get less instruction,” she told WUSA-TV. “To me, it just didn’t make sense.”

So, she started an online petition, called “#OneAPS.”

“If we were all online as one—retaining original master schedules for each school and keeping collaborative learning teams together—it would be a game changer and would include a greater chance of succeeding with online learning,” she explains.

Fox says she’s “pro-reality,” and by no means thinks the petition carries all the answers. Part of her goal was to help “disrupt the thinking…to refocus on the values of unity, science, and equity,” as well as gather support for the “#OneAPS” plan that encourages the district to start the school year with distance learning for all students so they could be educated under one model: together and equally.

Additionally, according to the petition, the district’s split model comes with other glitches. Students who choose the hybrid model would not be guaranteed their own teachers; and teachers would not necessarily return to their own schools and may be required to teach classes they’ve never taught before. More so, the plan mandates educators return to school under the hybrid model, or they may be forced to take leave without pay, retire, or quit.

Under the virtual model, students would have fewer guarantees, including being enrolled in classes operated by third party vendors instead of APS educators.

“This is not stick your finger in the leak and try to hold the dam. This is about protecting this system so it’s here for us when we get through this and using this as an opportunity to do what’s right to make things more equitable for everyone.”

The “#OneAPS” plan would keep the district as one united school system; would protect the health and safety of students, teachers and staff; would not force teachers into school buildings; and would support the most vulnerable learners, such as special education students and English language learners.

Fox is one of thousands of parents nationwide that has taken to online platforms to weigh in on the reopening debate. In Pennsylvania, for example, a Facebook group with nearly seven thousand members of parents, educators, students, and supporters are refusing to return to schools until counties report no new cases of COVID-19 for at least 14 days.

A group of parents, educators, school staff, concerned community members, and health officials in Hawaii have expressed strong opposition to the state’s reopening plan: “The current plan is unacceptable; it does not follow CDC guidelines on safe school reopenings, was designed and promulgated without adequate public input or transparency, and needlessly puts the lives of our community at great risk. It is nothing less than a recipe for a public health disaster.”

“The partnership between parents and educators is so important, especially in this time of crisis. Educators’ number-one concern is the safety, well-being and success of our students,” she said. “Parents and educators are standing together because we cannot wait. Our nation’s students cannot pay the price in this crisis.”

The NEA believes that any reopening model has to not only ensure the health and safety of students and staff, but also prioritize long term strategies on student learning and educational equity.

To assist states and school districts in this effort, this week NEA released “All Hands on Deck: Initial Guidance Regarding Reopening School Buildings.” Built around four basic principles—health expertise, educator voice, access to protection, and leading with equity—the document lays out what schools need to do to prepare for reopening, and how they can make their reopening succeed far beyond the first few weeks of the new school year.

We've been working day and night since we left our classrooms. We want to make it safe to come back. #WhenItsSafe @thelauracoates pic.twitter.com/AlNgixx9Qz

On May 15, the House passed the HEROES Act to help schools and campuses reopen safely and save educators’ jobs. Now, it’s up to the Senate. Budget cuts loom even as schools struggle to make the costly changes necessary to reopen safely.

Unless the Senate acts soon, those budget cuts could lead to the loss of nearly 2 million education jobs at every level from kindergarten to postsecondary, adding to the complications of reopening school buildings.

Everyone agrees the road to recovery runs through our schools. But they cannot reopen safely if school budgets are slashed and students do not have what they need to be safe, learn, and succeed—especially the students of color, students with disabilities, and students living in poverty who have suffered most during this crisis.