Above photo: A sign in Yellowstone National Park in 2009. Today, the park has a maintenance backlog of more than $603 million. Paul Souders / Alamy Stock Photo

The White House has been preparing for Trump’s extravagant military displays, which will reportedly include tanks and a flyover from Air Force One.

The National Park Service will divert about $2.5 million in fees gathered from park-goers to help pay for the hefty costs of President Donald Trump’s Fourth of July celebration, The Washington Post reported Tuesday.

The White House has been preparing for the president’s “Salute to America” on Thursday, a grand parade meant to showcase what Trump has called the “strongest and most advanced” military on the planet. Tanks have been shipped from Georgia, and a flyover by Air Force One is scheduled, as well as a promised “biggest ever” fireworks display, according to Trump.

But such plans have reportedly stretched the event’s budget far past normal. The Post noted that the entire Independence Day celebration usually costs the National Park Service about $2 million, but the NPS was directed to divert park entrance and recreation fees to help cover some of the additional costs of this year’s event, according to two anonymous sources familiar with the planning.

Such fees are often used on maintenance and improvements across the national park system. The entire National Park System, which covers 418 national parks, currently has nearly $12 billion in deferred maintenance due to a budget shortfall. 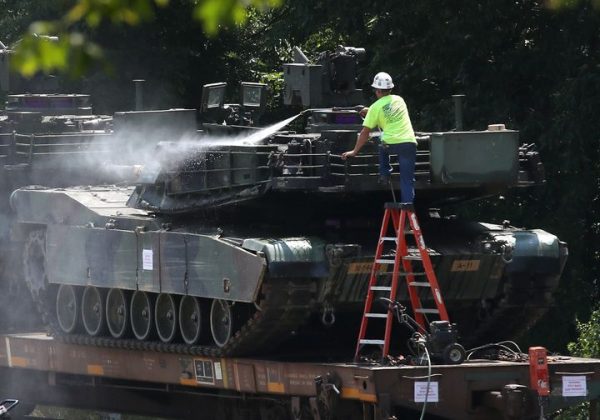 MARK WILSON/GETTY IMAGES
A worker washes one of two M1A1 Abrams tanks that are loaded on rail cars July 2 in Washington, D.C.

Trump has long touted the idea of a Fourth of July parade featuring U.S. military assets. After watching France’s Bastille Day parade in Paris in 2017, he pitched a similar event for Veterans Day, but the idea drew widespread criticism. The president abandoned those plans after the Pentagon said it would cost more than $90 million.

It’s unclear how much the Fourth of July event will cost, and Trump administration officials have refused to share a number, but estimates are high. The event will feature aircraft flyovers, including a display from the Navy’s Blue Angels squadron, pyrotechnics, and tanks and other military hardware. The Post also noted that officials have been scrambling to try to project an image on the Washington Monument, but the NPS does not typically allow such displays.

“It’ll be like no other — it’ll be special, and I hope a lot of people come,” Trump said outside the White House on Monday. “We have some incredible equipment, military equipment, on display — brand new. And we’re very proud of it.”

Big 4th of July in D.C. “Salute to America.” The Pentagon & our great Military Leaders are thrilled to be doing this & showing to the American people, among other things, the strongest and most advanced Military anywhere in the World. Incredible Flyovers & biggest ever Fireworks!

News of the diverted fees prompted a swift rebuke from advocates for the national park system. Theresa Pierno, president of the National Parks Conservation Association, told the Post the report amounted to a “breach of public trust.”

“The public pays parks fees to fix national parks and for educational programs, not the president’s parade,” she said.