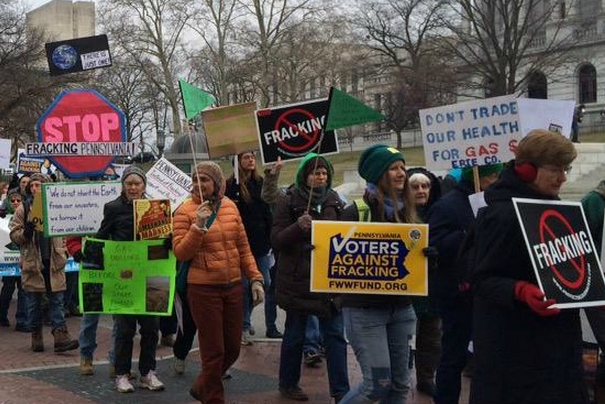 Partial Victory In Penn., No Fracking In Public Lands

Hundreds of people rallied outside the inauguration of Governor Tom Wolf last week demanding a total ban on fracking. (Photo courtesy of Pennsylvanians Against Fracking)

Note: Pennsylvanians Against Fracking have called for a ban on fracking statewide. In a press release they describe “Governor Tom Wolf’s reinstatement of the moratorium on state forest and park drilling to be an important first step in protecting Pennsylvania from fracking, but continues its call for an end to fracking everywhere in the state.” They note that Governor Wolf criticized former Governor Tom Corbett for opening up public lands to fracking. Regarding the decision to close public land, Karen Feridun, of Berks Gas Truth, a member of the Pennsylvanians Against Fracking steering committee said: “Clearly, Governor Wolf based today’s decision on his willingness to listen to the scientific evidence we had in 2010. We’re confident that if he listens to the current science, he’ll have no choice but to protect all Pennsylvanians and end fracking statewide.” The decision to ban fracking on state lands comes after Pennsylvanians protested for an end to fracking at his inauguration.

New Pennsylvania Governor Tom Wolf signed an executive order on Thursday reinstating a moratorium on new fracking leases in Pennsylvania’s public parks and forests. The move is being heralded by residents as an important step but still short of the state-wide ban they say is needed.

The development came just days after hundreds of people rallied at Wolf’s inauguration, under the banner of the coalition Pennsylvanians Against Fracking, to demand a complete ban on the controversial drilling practice. Local grassroots networks, from the American Indian Movement in Lancaster County to Marcellus Outreach Butler in Butler County, have led the opposition against the industry’s aggressive drilling expansion in the state, including the construction of nearly8,000 wells in recent years.

Jenny Lisak, of Pennsylvania Alliance for Clean Water and Air, declared in a press statement that the partial ban on fracking “is evidence of the power of the movement to stop fracking in our state.”

However, Lisak said that the order does not address the conditions of people already impacted by fracking. “I am fearful that the negative impacts of this process will be concentrated in communities already being harmed,” she explained.

Briget Shields of Marcellus Protest and Friends of the Harmed said that fracking has already created an acute crisis for many state residents: “Our organization works in Washington, Butler, Green and Fayette Counties, where there are hundreds of families who have been without potable water for more than five years. Tom Wolf should protect the people of this commonwealth, not just the parks and forests.”

The moratorium order signed by Wolf, who is a Democrat, reverses the policy put in place last year by Republican Governor Tom Corbett which allowed drilling permits on public lands.

Wolf, however, is not opposed to fracking overall. The new governor has vocalized his disagreement with the fracking ban recently announceed in neighboring New York’s and has received significant donations from the gas and oil industry.

Furthermore, the ban in public parks only applies to new leases and does not impact already existing deals.

Diane Sipe of the organization Marcellus Outreach Butler, told Common Dreamsshe finds it “ironic” that the governor seems more concerned about fracking in public parks than in human population centers. “He is allowing drilling to continue near residences, schools, shopping centers, and more.”

She added, “We need to impose a state-wide ban on fracking now.”