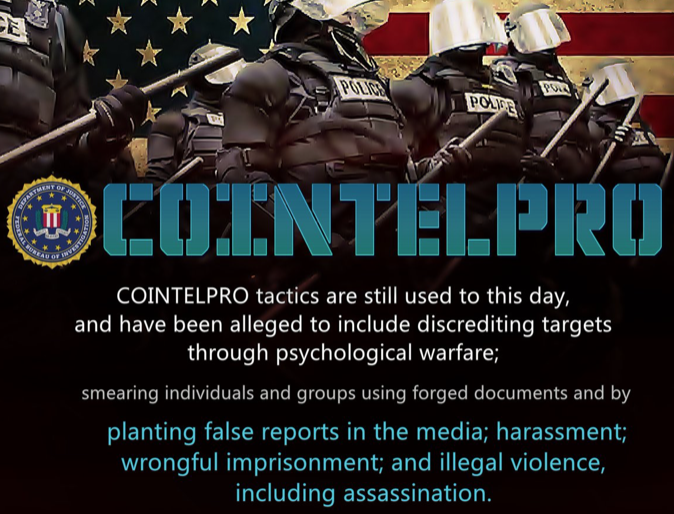 Part II Infiltration of Political Movements is the Norm, Not the Exception in the United States

By Kevin Zeese and Margaret Flowers

On March 6 members of an off-shoot of Anonymous, Lulzsec, were arrested as a result of an FBI informant, Sabu, who the media describes as a Lulzsec leader. The six arrests were for people allegedly involved with Lulzsec which became known for targeting Sony, the CIA, the U.S. Senate, and FBI, as well as Visa, MasterCard, and PayPal.

Exactly one year ago to the day of the arrests, The Guardian published an article headlined, “One in four US hackers ‘is an FBI informer.’” The article described how the FBI had used the threat of long sentences to turn some members of Anonymous and similar groups into informants.  It also described how the group was open to infiltration. On Democracy Now, Gabriella Coleman, a professor at McGill University who is an expert on digital media, hackers and the law, said:  “There had been rumors of infiltration or informants. At some level, Anonymous is quite easy to infiltrate, because anyone can sort of join and participate. And so, there had been rumors of this sort of activity happening for quite a long time.”

Infiltration is the Norm, not the Exception, of U.S. Political Movements

When the long history of political infiltration is reviewed, the Occupy Movement should be surprised if it is not infiltrated.  Almost every movement in modern history has been infiltrated by police and others using many of the same tactics we are now seeing in Occupy.

Virtually every movement has been the target of police surveillance and disruption activities.  The most famous surveillance program was the FBI’s COINTELPRO which according to COINTELPRO Documents targeted the women’s rights, Civil Rights, anti-war and peace movements, the New Left, socialists, communists and independence movement for Puerto Rico, among others.  Among the groups infiltrated were the Southern Christian Leadership Conference, the NAACP, Congress for Racial Equality, the American Indian Movement, Students for a Democratic Society, the National Lawyers Guild, the Black Panthers and Weather Underground. Significant leaders from Albert Einstein to Dr. Martin Luther King, Jr., who are both memorialized in Washington, were monitored. The rule in the United States is to be infiltrated; the exception is not to be.

The Church Committee documented a history of use of the FBI for purposes of political repression. They described infiltration efforts going  back to World War I, including the 1920s, when agents were charged with rounding up “anarchists and revolutionaries” for deportation. The Church Committee found infiltration efforts growing from 1936 through 1976, with COINTELPRO as the major program. While these domestic political spying and disruption programs were supposed to stop in 1976, in fact they have continued. As reported in “The Price of Dissent,” Federal Magistrate Joan Lefkow found in 1991, the record “shows that despite regulations, orders and consent decrees prohibiting such activities, the FBI had continued to collect information concerning only the exercise of free speech.”

How many agents or infiltrators can we expect to see inside a movement? One of the most notorious “police riots” was the 1968 Democratic Party Convention.  Independent journalist Yasha Levine writes: “During the 1968 protests of the Democratic National Convention in Chicago, which drew about 10,000 protesters and was brutally crushed by the police, 1 out of 6 protesters was a federal undercover agent. That’s right, 1/6th of the total protesting population was made up of spooks drawn from various federal agencies. That’s roughly 1,600 people! The stat came from an Army document obtained by CBS News in 1978, a full decade after the protest took place. According to CBS, the infiltrators were not passive observers, monitoring and relaying information to central command, but were involved in violent confrontations with the police.” [Emphasis in original.]

Peter Camejo, who ran for Governor of California in 2003 as a Green and as Ralph Nader’s vice president in 2004, often told the story about his 1976 presidential campaign. Camejo able to get the FBI in court after finding their offices broken into and suing them over COINTELPRO activities.  The judge asked the Special Agent in Charge how many FBI agents worked in Camejo’s presidential campaign; the answer was 66 agents.  Camejo estimated he had a campaign staff of about 400 across the country.  Once again that would be an infiltration rate of 1 out of 6 people.  Camejo discovered that among the agents was his campaign co-chair. He also discovered eavesdropping equipment in his campaign office and documents showing the FBI had followed him since he was a student activist at 18 years old.

The federal infiltration is buttressed by local and state police.  Local police infiltrators have a long tradition dating back to the Haymarket riots of 1886 and the 1904 “Italian Squad in New York City. In addition to political activity, they were also involved in infiltrations of unions especially around strikes. Common throughout the United States were the so-called “Red Squads” a 1963 report estimated 300,000 officers were involved in surveillance of political activities. These were local police focused on the same types of people like the FBI.  Some of their activities included assassinations of political activists.

In fact, a predecessor to the modern Occupy, the Bonus March of 1932 was infiltrated by federal agents.  Their focus was on radicals, anarchists and Communists who might be in the movement.  The infiltration resulted in greatly exaggerated reports about radicals inside the Bonus encampments, which were primarily made up of veterans and their families that were used to help justify their removal by President Herbert Hoover with military troops acting against veterans under the command of General Douglas MacArthur, assisted by then-colonels Eisenhower and Patton.

Another predecessor to the Occupy, Resurrection City of 1968, a “community of love and brotherhood,” that occupied the Washington, DC mall for four months was organized by the Poor People’s Campaign fulfilling a plan made prior to the death of Dr. Martin Luther King, Jr.  Resurrection City was heavily infiltrated by layers of police including the FBI, military, Park Police, Secret Service, and Metropolitan DC police.  FBI director Hoover had agents go to press conferences with false media identification, stationed FBI agents around the perimeter of the encampment and authorized an expensive informant program.  After the FBI, the most expensive infiltration of Resurrection City was military intelligence which conducted an unlawful surveillance program, intercepting radio transmissions, monitoring radio traffic and intercepting all communications which were then passed on to the FBI, Secret Service, DC police and Park Police. The military also sent fictitious media to press conferences. The Metropolitan DC police “red squad” sent undercover officers into the camp and took mug shots of its members.

Infiltration tactics continue, perhaps have even escalated today. In a recent report, the ACLU writes: “Today the government is spying on Americans in ways the founders of our country never could have imagined. The FBI, federal intelligence agencies, the military, state and local police, private companies, and even firemen and emergency medical technicians are gathering incredible amounts of personal information about ordinary Americans that can be used to construct vast dossiers that can be widely shared with a simple mouse-click through new institutions like Joint Terrorism Task Forces, fusion centers, and public-private partnerships. The fear of terrorism has led to a new era of overzealous police intelligence activity directed, as in the past, against political activists, racial and religious minorities, and immigrants.” There have also multiple reports of the CIA working with New York City police for years, an activity that is almost certainly illegal.

Not only have budgets increased in the post-911 world, but restrictions on spying have been weakened and court review has become rarer.  The government, often with corporate interests, are gathering huge amounts of data on Americans and targeting a wide range of groups and individuals for intelligence gathering and infiltration. The extent of spying is so widespread that it is more than this brief article can examine, but the ACLU provides a state-by-state review.

We will not know the extent of current infiltration and the activities of government agents for quite some time, but in the post-911 world, with record intelligence budgets and a massive new homeland security bureaucracy, spying is very likely more extensive than ever.  Add to that the private security of corporations and political organizations tied to the two political parties and the extent of Occupy infiltration is very likely quite extensive.

What Have Been the Goals, Strategies and Tactics of Past Infiltration?

The most common purpose of infiltration is the intelligence function of gathering information, but the goals are commonly more aggressive. J. Edgar Hoover ordered FBI agents to “expose, disrupt, misdirect, discredit, or otherwise neutralize” the activities of these movements and their leaders according to COINTELPRO Documents.

According to, Surveillance and Governance: Crime Control and Beyond, the goal of COINTELPRO was also to “expose, disrupt, misdirect, or otherwise neutralize” groups.  FBI field operatives were directed to:

1.          Create a negative public image for target groups by surveiling activists and then releasing negative personal information to the public.

2.          Break down internal organization by creating conflicts by having agents exacerbate racial tensions, or send anonymous letters to try to create conflicts.

3.          Create dissension between groups by spreading rumors that other groups were stealing money.

4.          Restrict access to public resources by pressuring non-profit organizations to cut off funding or material support.

5.          Restrict the ability to organize protests through agents promoting violence against police during planning and at protests.

6.          Restrict the ability of individuals to participate in group activities by character assassinations, false arrests, surveillance.

The COINTELPRO documents disclose numerous cases of the FBI’s intentions to stop the mass protest against the Vietnam War. Many techniques were used to accomplish the assignment. The documents state: “These included promoting splits among antiwar forces, encouraging red-baiting of socialists, and pushing violent confrontations as an alternative to massive, peaceful demonstrations.”

Infiltration to gather intelligence and intentionally disrupt and break up social movements is common in the United States. At this point in history when the degree of wealth inequality has reached such staggering proportions that the richest 400 people have the same wealth as the bottom 154,000,000 people, when unemployment and foreclosures rates are high, when tens of millions can’t afford health care and students can’t afford to go to college, those in power are fearful that the people will rise up. Events of the past year, particularly the Occupy, reveal that this uprising has begun. It is likely that the powerful will use the tools available to stop Occupy, including infiltration to disrupt, divide and misdirect.

In Part III, we will describe common behaviors of infiltrators and how other social movements have tried to minimize the impact of infiltration. We will then examine the basic structure of the Occupy and analyze its strengths and weaknesses in the context of infiltration. Our hope is that this series will lead to a broader discussion within the movement so that efforts can be made to balance the strengths of Occupy with actions necessary to protect the movement from disruption and division.

If you have experience with your Occupy responding to infiltration please send them to research@october2011.org. Experiences that have worked and failed are of interest.