Patricia Okoumou To Be Sentenced On March 19, 2019 For Statue Of Liberty Protest

Courageous Resister Occupied the Statue of Liberty Protesting the Separation of Migrant Children at the Border, Faces Prison Time.

At the height of the outrage against the U.S. government’s separation of migrant children at the border, Patricia Okoumou climbed the Statue of Liberty on July 4, 2018. She said, “When I climbed the Statue of Liberty, I wanted to express the urgency of stopping our government’s reprehensible and inhumane treatment of migrant children … I wanted no one to forget that children have been forced into cages and that we must do everything we can to stop the imprisonment of children … Parents are torn apart with grief and very little has been done to unite the families.” 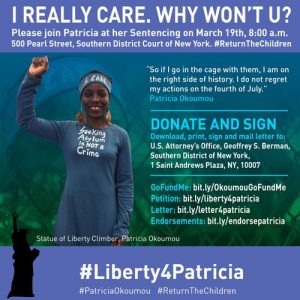 Ron Kuby, Patricia’s attorney, stated, “Since Patricia Okoumou’s conduct was a profound act of conscience, it’s necessary and appropriate that she be tried by jury that is the conscience of the community.” This request was denied and Patricia faced a bench trial.

So Patricia appeared in Federal court on December 17, 2018; and on that afternoon was found guilty of three misdemeanors: Trespassing, Interference of Government Function, and Disorderly Conduct. Judge Gabriel Gorenstein stating that the protester’s political and moral motivation did not “Trump” the law.

On March 1st  she was placed on house arrest until her scheduled sentencing on March 19th. Under the conditions of the “home detention,” she cannot step outside of her apartment unless she gives two-day advance notice, e.g. to throw out the garbage, to buy groceries or to get the mail, or to see a doctor. Additionally, she is required to wear an ankle bracelet as well as surrendering her passport. 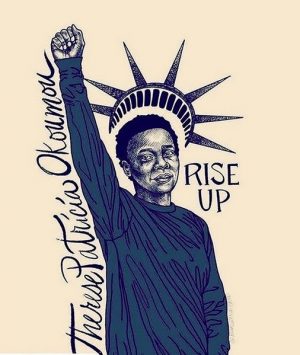 Patricia will be sentenced on March 19th at the U.S. Courthouse, 500 Pearl St., Manhattan at 9:30 AM. She faces up to 18 months in prison. Come out to support Patricia, a brave and fearless freedom fighter, who by her action has made a powerful statement against the Fascist Trump/Pence Regime.

Patricia needs your support, see below on how you can help:

Support Patricia Koumou through her Go Fund Me page.