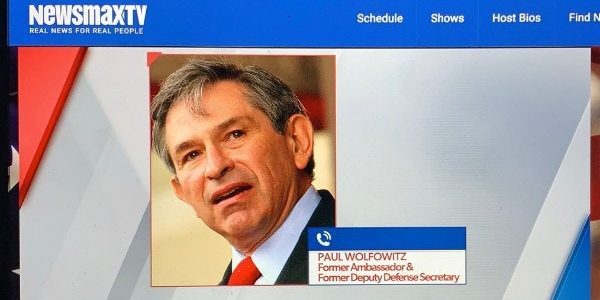 Next Time Around, Let’s Spend It On Something To Be Proud Of, “Wolfowitz” Says.

NewsmaxTV today allowed a fake Paul Wolfowitz to spend 11 minutes telling its hundreds of thousands of viewers that the $2.1T war in Afghanistan, begun by his administration in 2001, was a complete waste of money. “The next time we have two trillion dollars lying around, let’s spend it on something useful like health care or education,” said “Wolfowitz” to Tom Basile, live on the air.

Here below is a partial transcript of the interview. For more on the interview and its fallout, visit www.theyesmen.org/newsmax.

Tom, there’s been a lot of focus on how Biden ended this war in Afghanistan, and on what we have to do now — but very little about the FACT that Biden did end this war.

Now we do have to rescue our allies. Every single Afghan who needs to get out of there should be able to do so.

But Tom, what our piece in the Wall Street Journal is really about is that a sitting president, in the office of president, unnecessarily ended a war — for no reason at all.

Because let’s be honest, Tom — there just aren’t a lot of things that ordinary Americans can be proud of these days.

If you take away our global dominance — well, we’re left with a whole lot of nothing, Tom.

Biden should have waited till he got at least something passed in terms of health care and education, for example, or even just transport and infrastructure.

But with nothing to show Americans why America’s great… dominance in a place like Afghanistan is all we’ve got to keep us away from that ledge.

Of course two trillion dollars could have been spent building stuff people want, instead of going to big defense contractors and their shareholders.

But that’s all milk under the table.

The point is, ending a war with nothing at all to replace it is the pinnacle of irresponsibility when you’ve got crumbling infrastructure, rising addiction and death rates, poor food options, substandard education, expensive health care, and so on.

That’s what we’ve lost, Tom, and that is truly tragic.