As part of this weeks call to action on #J20, former defendants are donating thousands of dollars to anarchist and antifascist prisoner support projects all over the world.

Two years ago, roughly twenty anarchists, anti-fascists, and anti-capitalists from the North Carolina region were among the 200+ people arrested for disrupting the Presidential Inauguration spectacle, also known as J20).

Some of us went to trial. Some of us stuck it out until the final dismissal. None of us accepted their bullshit pleas. Despite the prosecution’s divide and conquer tactics, we stuck together. And we beat them! Along the way we learned valuable lessons, gained stronger relationships, and, thanks to our amazing regional support network, a few thousand dollars in defense funds. 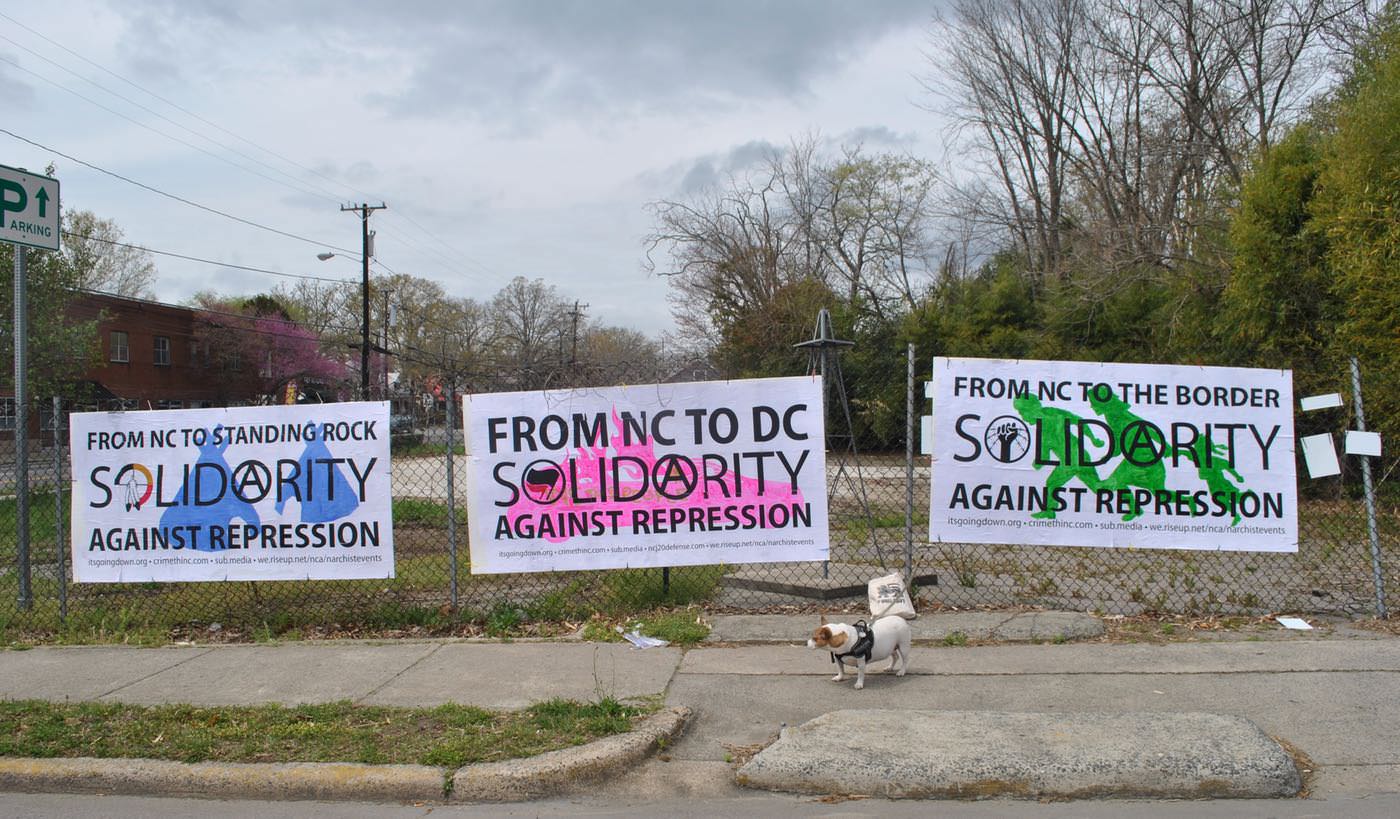 With the J20 cases now dismissed, our contribution to this year’s J20 week of action is to pass on those funds in the same spirit that they were given to us—to support those facing state repression for their struggles: Anarchist Black Cross Federation Warchest – to the amount of $3,000.

The ABCF Warchest has existed since 1994 and sends a $30 monthly stipend to political prisoners based on their level of need. Had J20 not ended victoriously for any of us, we know that the Anarchist Black Cross would have been there to give us long-term support, even as the case stopped showing up in the headlines. Realistically, some of us were only a few bad rulings away from actually serving time, so it’s important to us to demonstrate material solidarity with those who *are* doing time for their struggles against oppression and domination. For many of us, the stories behind the political prisoners supported by ABC inspired us to face the J20 charges with our heads held high, and we thank them for their continuing courage.

This fund is managed by a closed collective that sends $20-a-month to prisoners related to the 2014 Ferguson, Missouri uprising. The $2,000 that we’re donating will cover outstanding costs, post-release needs, help for Ferguson prisoners’ families, and survival expenses like winter clothes in prison. 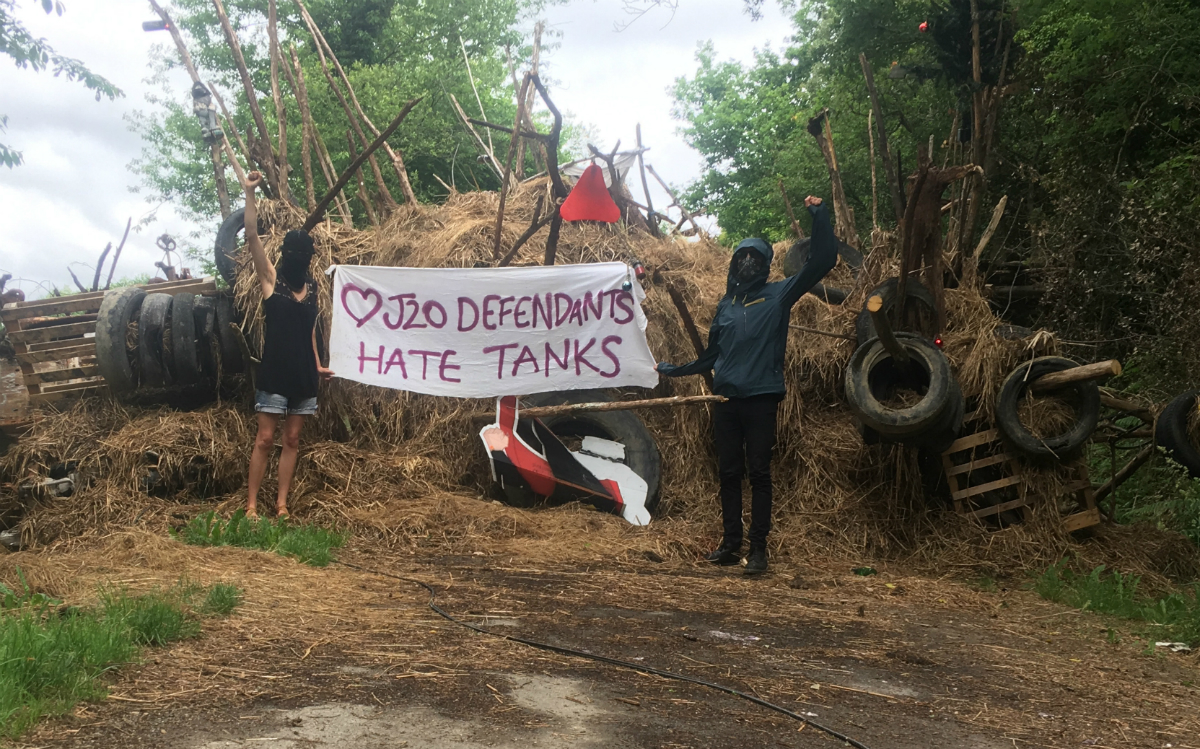 The current wave of fascism and Trumpism that we stood up against on January 20, 2017 is a reaction to the 2014-2016 wave of black revolt that swept across the USA. The debut of this movement came with the Ferguson Uprising, so it just felt natural to give what we could to those doing time for sparking one of the most important rebellions of our lifetime.

The International Anarchist Defense Fund gives %10 of its total funds to each request that its collective of donors approves. As reactionary governments are spreading across the globe, this fund is a way to support comrades in countries where fundraising is difficult, where American dollars can go a lot further.

Solidarity with Russian Anarchists and Anti-fascists – $2,000

Since 2017, the FSB, the Russian version of the FBI, has been rounding up anti-fascists and anarchists and torturing them with gruesome violence (including electrocution) in order to make them sign false confessions. FBI-infatuated liberals would like us to see the Russian government as a threat to us *as Americans*, but as defendants who were threatened with decades in prison for resisting authoritarianism here—who were prosecuted in a case where the plaintiff was *literally* the United States of America—we don’t harbor any national allegiance. On the other hand, we *do* support the brave souls actually facing the brunt of the Russian state: anarchist and anti-fascist freedom fighters. The real conflict is not between nations like Russia and the US, but between the governments of those nations and the people they seek to oppress.

International solidarity against all forms of state repression!

Being from North Carolina, we also wanted to show solidarity with the struggles against white supremacy where we live. Last year, brave anti-racists and anti-fascists tore down the confederate Silent Sam statue in Chapel Hill. As of this writing, 20 activists are still facing charges for opposing white supremacy and neo-confederates during events in the wake of the fall of Silent Sam. Take Action Chapel Hill’sAnti-Racist Activist Fund provides support for these activists’ legal costs.

And now, a message of thanks to Assistant US Attorney Jennifer Kerkhoff:

Collectively, you threatened us with thousands of years in prison, but now, thanks to you, we’re donating thousands of dollars to support political prisoners in the USA and revolutionaries facing state repression across the world.

Thanks to you, the J20 case has catalyzed an annual week of action to demonstrate direct action, mutual aid, and visions of liberation. 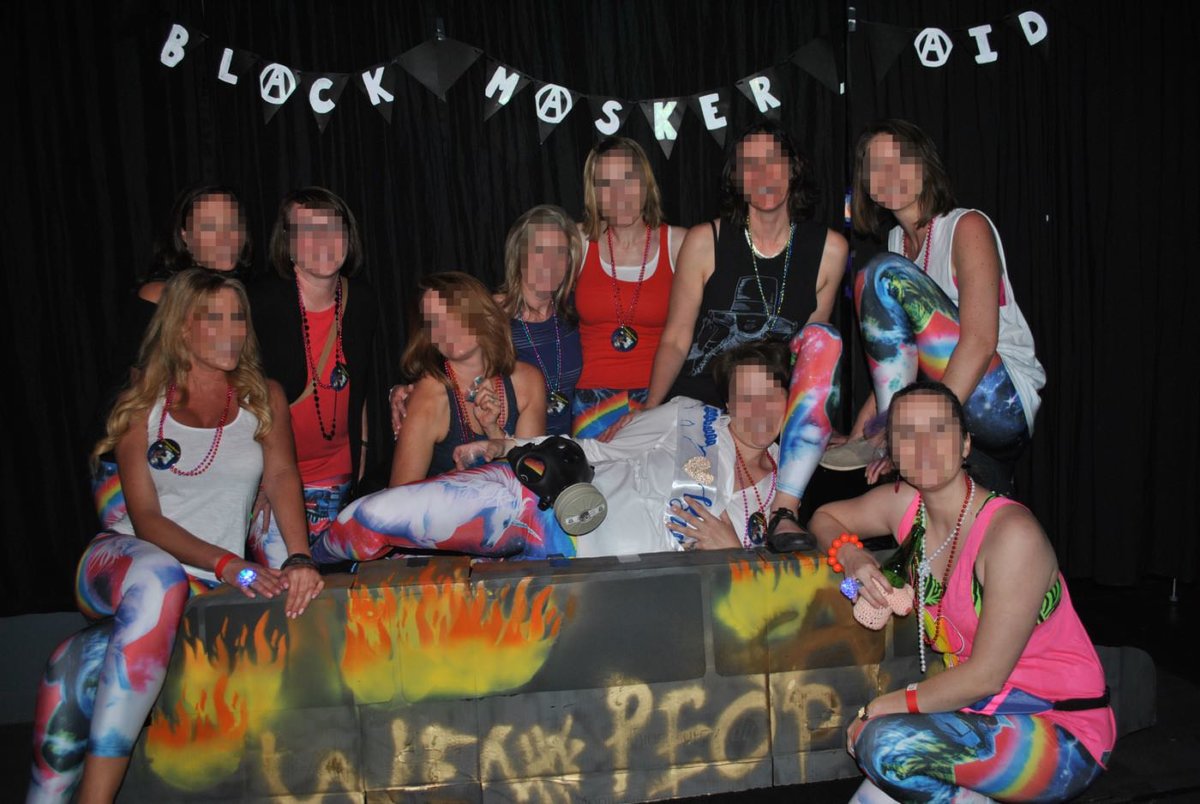 Thanks to you, our relationships are stronger, our understanding of state repression and collective defense has grown, and our dedication to fighting for liberation has deepened.

So, as weird as this may sound, thank you. All this may not have been the goal you were reaching for (emphasis on the “reaching” part), but you did a good job. If only all prosecutors were as effective as you were with the J20 case… But your job is done now. So, Jennifer Kerkhoff, you may kindly Fuck Off.