Above photo: Activists rally outside the Trident nuclear submarine base. From Ground Zero Center for Nonviolent Action.

Peace activist James Manista appeared on Wednesday, October 23rd in U.S. District Court, Western District of Washington, in Tacoma, Washington. Mr. Manista was charged with crossing the federal blue line onto federal property at the main gate of the Trident nuclear submarine base on May 11, 2019.

Mr. Manista was the only demonstrator to enter federal property on May 11. Mr. Manista later stated, “Encouraged by the heroism of protestors and filled with a hope we can respond rationally and creatively to the threatening curse of planetary horror, I carried my banner asserting nuclear weapons are immoral (to produce, stockpile, and use) onto the ground of those most likely to need reading it and taking its message to heart.”

At the same May 11 demonstration, eight other peace activists blocked the main gate entrance to the Naval Base Kitsap-Bangor on the Kitsap County side of the blue line with banners that read: “Disarm Trident, Deploy Peace”, “Congress Wants $1 Trillion for Nuclear Weapons” and “What Will Be Left for Our Children?” The demonstration commemorated the original anti-war message of Mother’s Day, which calls for the abolition of war and militarism.

Mr. Manista was charged with U.S. Code § 1382, Entering military, naval, or Coast Guard property, subjecting him to a possible 6 months in jail and $5,000 fine. James Manista pled “not guilty” at his arraignment on September 4, 2019, in U.S. District Court in Tacoma.

On October 23, Mr. Manista changed his plea in the courtroom to “guilty” and read an impassioned statement explaining his opposition to nuclear weapons. The Navy prosecutor recommended a $50 fine for James Manista’s act. Magistrate Judge Theresa Fricke accepted Mr. Manista’s guilty plea and stated, “I will lower the recommended fine in recognition of defendant’s conscientious protest” and lowered the fine to $25. James Manista agreed to pay the $25 fine, $10 mandatory fee, and $30 for processing the case.

At the same time as the hearing in Tacoma, Plowshares peace activists who entered the other Trident nuclear submarine base at Kings Bay, Georgia on April 4, 2018 were also in federal court in Brunswick, Georgia. The members of the Kings Bay Plowshares 7 face decades in prison for their nonviolent direct action at the East Coast Trident submarine base.

On October 23, Mr. Manista stated in the courtroom in Tacoma, Washington:

After study and prayer, I concluded our nuclear policy of Mutually Assured Destruction is an irrational delusion which, by accident or intention, will inevitably one day annihilate all life on earth—an omnicide where neither we nor roaches nor viruses survive. We have ignored this for close to 75 years as if, cowed and lulled by our country’s militarism, we slept on an ever costlier, ever larger pile of dynamite, trusting that diabolical MADness to prevent our obliteration. But we have seen ingenious systems fail and we know fissile materials have been misplaced, lost, or stolen. For decades we presumptively feared it would be a maniac from some other country who might topple the Jenga tower of worldwide death. I decided I could no longer by silence be complicit in this risk of the greatest conceivable evil.

Heartened by the heroism of protestors like the Plowshares 7 and my fellow Ground Zero colleagues, and filled with a hope of responding rationally and creatively to the prospect of planetary horror, I had a banner made asserting “Nuclear weapons are immoral” (to produce, stockpile, and use) and displayed it on the ground of those most likely to benefit from reading it and taking its message to heart. I did not just trespass on the base which—without my banner—I had no cause to do—but with it I finally and publicly answered the duty of my conscience and exercised my right of free speech where the federal government seemed not to want me to.

Your honor has the opportunity—as do all—to join the community resisting nuclear madness. Declare the money, genius, and effort we have so far expended out of fear a moral waste. Declare we could have aided the world to have cleaner water, wider education, more hospitals, and all manner of economic development instead of spreading a debilitating fear of impending doom. 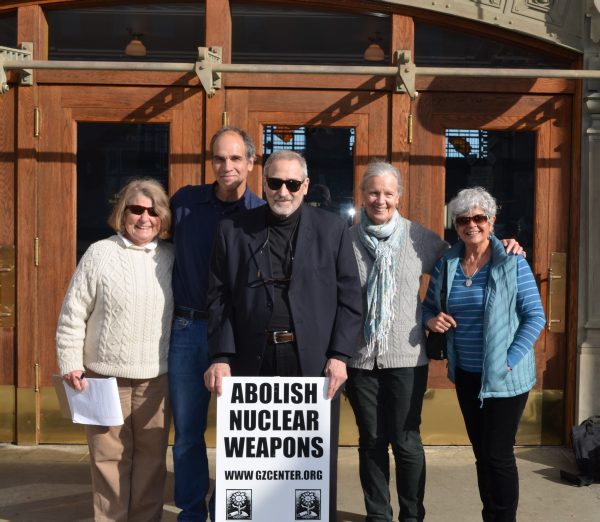 Through our well-intentioned wizardry we led nations to the precipice of nuclear despair. By courage we can lead them safely away to begin the tasks of justice for a peaceful world.

At the end of the hearing on October 23, Magistrate Judge Theresa Fricke told Mr. Manista, “I respect your First Amendment protest and your firmly-held beliefs.”

Each Trident submarine was originally equipped for 24 Trident missiles. In 2015-2017 four missile tubes were deactivated on each submarine as a result of the New START Treaty. Currently, each Trident submarine deploys with 20 D-5 missiles and about 90 nuclear warheads (an average of 4-5 warheads per missile). The warheads are either the W76-1 100-kiloton or W88 455-kiloton warheads.

The Navy is currently planning to implement a smaller W76-2 “low-yield” or tactical nuclear weapon (approximately 6.5 kilotons) on ballistic submarine missiles at Bangor, dangerously creating a lower threshold for the use of nuclear weapons.

The Ground Zero Center for Nonviolent Action was founded in 1977. The center is on 3.8 acres adjoining the Trident submarine base at Bangor, Washington. We resist all nuclear weapons, especially the Trident ballistic missile system.