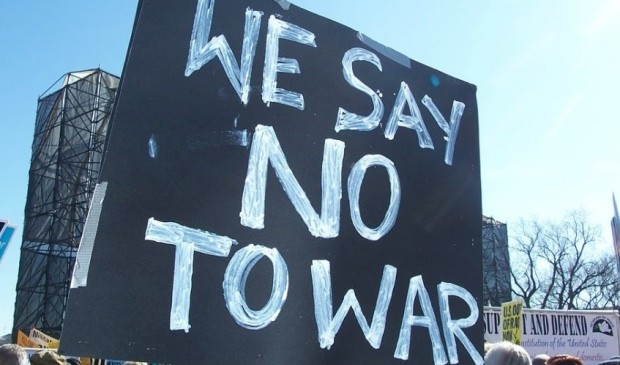 A security guard’s encounter with an anti-war protester who was holding a sledgehammer in one hand and baseball bat in the other led to the arrests of four peace activists Sunday night on the grounds of defense contractor Northrop Grumman in Bellevue, Neb.

At their first court appearance Tuesday, large bonds were set for Michele Naar-Obed, Jessica Reznicek, Frank Cordaro and Mauro Heck. The four were each charged with felony burglary and felony criminal mischief after police encountered them on Northrop Grumman property. Some windows were broken, and the damage was estimated at $8,000.

Reznicek, 34, who was holding the bat and sledgehammer, told television station KETV that she alone did the damage. She was given the highest bond at $100,000. Naar-Obed, Heck and Cordaro were each given $20,000 bonds. Naar-Obed, Cordaro and Heck were released Tuesday after posting a percentage of their bonds. Reznicek remains in jail.

“My intention was to be on the property and to do property destruction, that’s what I wanted to do,” Reznicek told a KETV reporter via a jailhouse phone interview. “I didn’t want to hurt anybody. I didn’t want to scare anybody.”

Michele Naar-Obed’s husband, Greg Boertje-Obed, told the television reporter that the four were engaged in an anti-war protest at Northrop Grumman.

“We oppose nuclear weapons as Catholic Workers,” said Boertje-Obed, a long-time anti-war activist who was released earlier this year after serving a two-year prison sentence for a Plowshares protest with two others at the Y-12 weapons plant in Oak Ridge, Tenn. “We oppose the making and selling of weapons for profit.”

Following their arrests Sunday, the four were booked into Sarpy County Jail. In a telephone interview following her release, Michele Naar-Obed, 59, toldNCR she had only gone along for the car ride to Northrop Grumman to support Reznicek, who, along with Cordaro, is part of the Catholic Worker community in Des Moines, Iowa.

“My role in all this was to be with the group that drove her there,” Naar-Obed said. “I had no intention of going in or participating in the action itself.”

Naar-Obed and her husband Greg Boertje-Obed are members of the Duluth, Minn., Catholic Worker community. Cordaro, 64, is a former Catholic priest and another long-time peace activist. Heck is a photographer and long-time Iowa peace activist.

Recalling the events, Naar-Obed said Reznicek was planning to be the lone actor in an attempt to “disarm” computer equipment at Northrop Grumman, but after dropping her off, the group — concerned for her safety — stayed behind and waited for things to unfold. Heck also took a picture of Reznicek shortly before her arrest. His camera was confiscated, Naar-Obed said. By the time the trio decided to drive off, the police had already been called. When a police car spotted a lone car leaving the Northrop Grumman property, the three were pulled over and detained.

Naar-Obed, who, like her husband, has also spent time in prison for anti-war activities, said Reznicek’s action was a “disarmament” action, but not a traditional “plowshares action” in which the actors cite Isaiah 2:4: “And they shall beat their swords into plowshares and their spears into pruning hooks. Nation will not take up sword against nation, nor will they train for war anymore.” Plowshares activists often give a name to their actions and write a statement explaining their motives. Naar-Obed said Reznicek did write a statement, but it was lost or misplaced en route to the protest.

Heck told the KETV reporter that he was not involved in the planning process with Reznicek, but he did say he drove the group to Northrop Grumman “in hopes of raising awareness on government spending.”

“We have to be conscious of how people’s taxes are spent,” Heck told the reporter. “People are not even aware.”

In court Tuesday, Reznicek said: “I assure you I did all the damage. I will not back down from that statement.”

Reznicek said she had no plans to post bond. She also told the television reporter she used a sledgehammer to break the glass as part of a research project for a grant.

“She wanted to get in, and she wanted to hammer on the computers if they became available to her,” Naar-Obed said. “She didn’t have a specific plan other than to get in and see what things there might be available for her to do this kind of disarmament action.”

“The baseball bat had some slogans on it like, ‘Drones are immoral, illegal’ — ‘Stop killing’ — ‘Stop war’ — kinds of stuff,” she said.

The four are scheduled to be back in court in January.