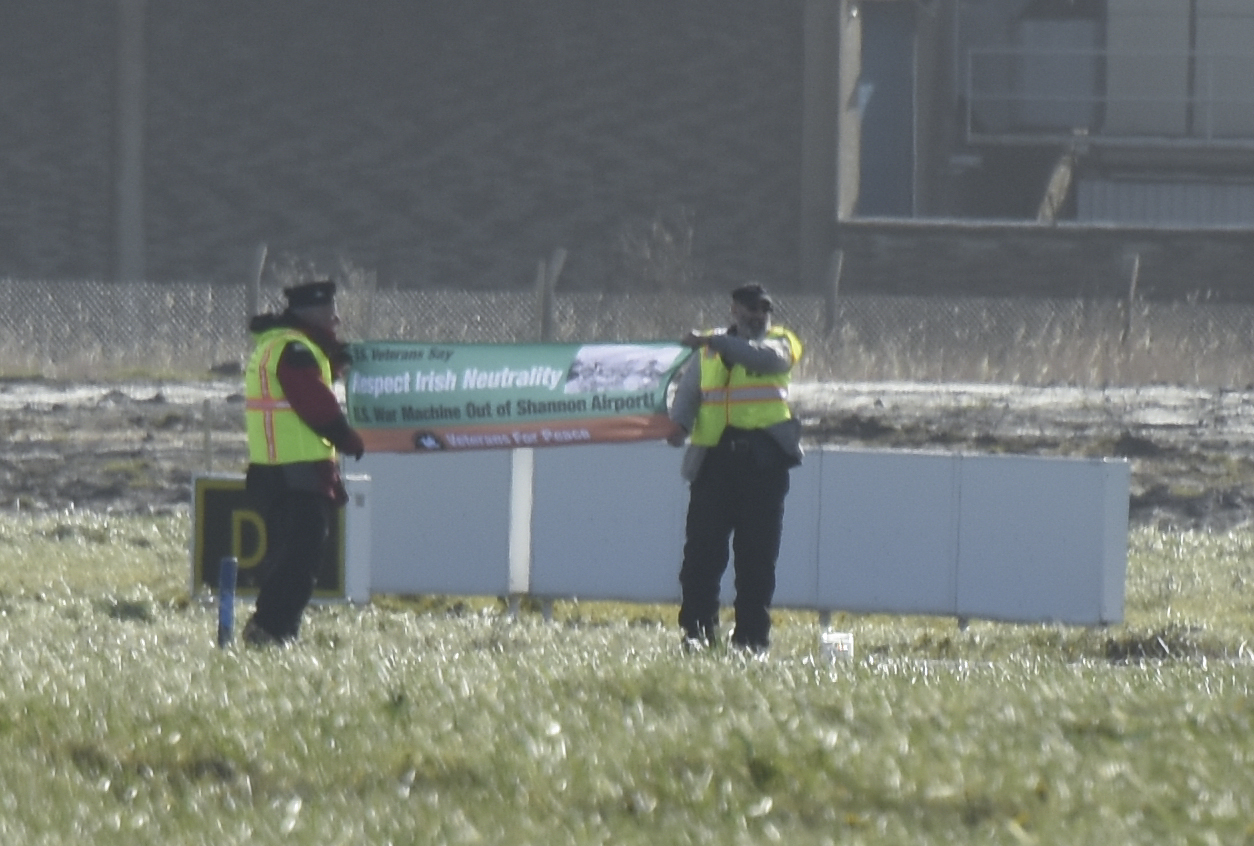 Judge Patricia Ryan sent a clear message to protesters objecting to illegal U.S. military flights through Shannon Airport today by fining the Shannon Two 10,000 euros after they were convicted of interfering with the operation, management and safety of the facility.

On May 3, the jury found Tarak Kauff and Kenneth Mayers not guilty on the two charges of criminal damage and trespass at Shannon airport, but guilty of the unusual charge of interfering with the airport operation, management or safety, which was added to the case two years after the fact. Mayers and Kauff had pleaded not guilty to all charges.

Ken Mayers and Tarak Kauff were arrested on St. Patrick’s Day, 2019, at Shannon Airport for going onto the airfield to inspect U.S. military aircraft or cause them to be inspected. They carried a banner that said, “U.S. Military Veterans Say: Respect Irish Neutrality; U.S. War Machine Out of Shannon.” Over three million armed U.S. troops have passed through Shannon Airport since 2001 on their way to illegal wars in the Middle East, in violation of Irish neutrality and international law. Kauff and Mayers were attempting to either inspect the planes or to get Irish authorities to do so, but they were instead arrested.

There were three aircraft associated with the US military at Shannon at the time—a Marine Corps Cessna jet, a US Air Force Transport C40 aircraft, and an Omni Air International aircraft on contract to the U.S. military.

The defendants, who are U.S. military veterans and members of Veterans For Peace, had already spent 13 days in Limerick Prison in 2019, and their passports were confiscated, forcing them to spend a further eight months in Ireland.

During that time, the case was first moved up to the Circuit Court, assuring that they would get a jury trial, and then the venue was moved from County Clare, where the airport is located, to Dublin.

Kauff and Mayers have a different view of what the trial should have been about. “Our purpose was in our own way, to put the government and the U.S. military on trial for killing people, destroying the environment, and betraying the Irish people’s concept of their own neutrality,” said Kauff. “U.S. war-making is literally destroying this planet, and I don’t want to be silent about it.”

No senior U.S. political or military U.S leaders have ever been held accountable for war crimes committed in these Middle East wars, and no Irish officials have been held accountable for active complicity in these war crimes. Yet over 38 peace activists, including Mayers and Kauff, have been prosecuted for carrying out nonviolent peace actions at Shannon Airport in order to expose and try to prevent Irish complicity in these war crimes.

In the course of the trial, not a single Garda (Irish police) or airport security officer could point to a U.S. military plane having ever been inspected for weapons while at the airport; indeed, John Francis, chief of security at Shannon testified that he “wouldn’t be aware” if weapons or munitions were moving through the facility.

This peace action by Kauff and Mayers is a small but significant step towards getting some accountability for war crimes by the US and other countries, including recent Russian war crimes in Ukraine.

The world and humanity are now on the brink of World War 3 combined with catastrophic climate change, partly caused by militarism and resource wars. Peace by peaceful means was never more urgent.

“Our justified peace actions at Shannon Airport were just one of many such peace actions by us and many other peace activists around the world” said Kenneth Mayers, “These actions are like the drops of water that gradually created the Grand Canyon in our home country.”

ExBulletin: No Country for Old Men with Ken Mayers and Tarak Kauff

Independent.ie: Two US Army veterans convicted of interfering with operation of Shannon Airport as part of anti-war protest

The Guardian: Two ‘courteous’ US anti-war veterans in their 80s fined for disrupting Irish airport