Peace Conference: Stop the Wars at Home and Abroad 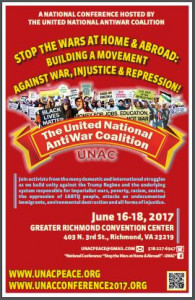 A National Conference: “Stop the Wars at Home & Abroad: Building a Movement Against War, Injustice & Repression!” – Hosted by the United National Antiwar Coalition (UNAC – unacpeace.org). Join activists from the many domestic and international struggles as we build unity against the Trump Regime and the underlying system responsible for imperialist wars, poverty, racism, sexism, the oppression of LGBTQ people, attacks on Muslims and undocumented immigrants, environmental destruction and all forms of injustice. A conference website will be up and running soon. Meanwhile, hold the dates and plan to join us June 16-18 in Richmond, Virginia!

All across the United States, people are rising up against the destructive policies of Donald Trump and Congress. Massive protests took place during Trump’s inauguration on Jan. 20. The next day millions of women and their supporters turned out in some of the largest mobilizations seen in decades. From solidarity vigils to clashes in the streets, the people are defiantly saying we will not accept the ultra-reactionary policies spewing forth from the White House. No wall! No ban! No deportations! No more police murders! No attacks on reproductive freedom! No Dakota Pipeline! No oppression of lesbians, gays, bisexual and trans people! NO WARS!

But the reactionary policies keep coming, while the Democratic Party is trying to position itself as the only viable opposition – the same party that chose as its standard-bearer one of the most despised presidential candidates in recent years, leaving voters with a choice between a racist, misogynist, xenophobic, billionaire bully and a Wall Street-serving war criminal.

There must be an alternative to the neoliberalism of the Democrats and the nationalist-populism of Trump. We need an independent movement to address both the economic needs of poor and working people and the escalating attacks on the Black community, immigrants, women, unions, LGBTQ folks, refugees, Muslims, the physically and mentally challenged, youth, students, the elderly, Mother Earth – all of us. And we need to END THE WARS that are promoted by both major parties, from the ongoing wars in the Middle East and Northern Africa waged during the Obama years to the threats against Iran and North Korea coming from the new administration.

If we can build that united movement, we can unleash the power of the people in ways that will make a real difference.

For information about affiliating your organization with UNAC and having representation on the UNAC Coordinating Committee, contact Joe Lombardo at:
Phone: 518-227-6947
SnailMail: UNAC, PO Box 123,  Delmar, NY 12054
Email: UNACpeace@gmail.com