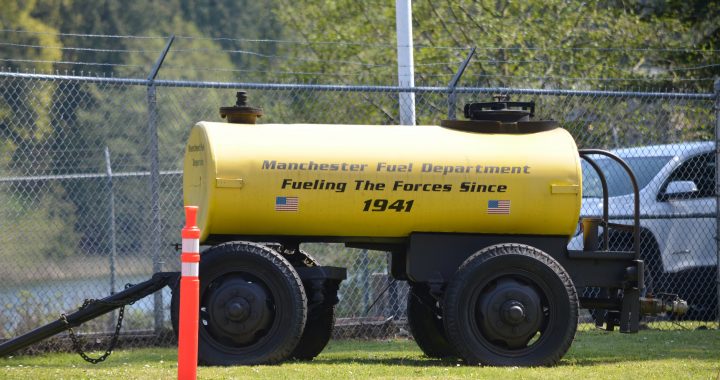 Peace and environmental activists joined for Earth Day at Manchester fuel depot to protest hydrocarbon use by the Navy and Department of Defense.

Manchester, Washington – Activists with Ground Zero Center for Nonviolent Action, 350 West Sound Climate Action, Earth Care Not Warfare and other peace and environmental groups met at noon at Manchester State Park.  From there, they walked to the Manchester fuel depot, the Department of Defense’s largest single-site fuel terminal in the United States, and demanded that the U.S. military reduce its carbon footprint while reducing its global military footprint on the planet.  The U.S. military has approximately 750 military bases around the world and emits more carbon into the atmosphere than 140 nations.

If the U.S. military were a country, its fuel usage alone would make it the 47th largest emitter of greenhouse gases in the world, sitting between Peru and Portugal.

The Manchester fuel depot sits on approximately two miles of Puget Sound shoreline, storing product in 44 bulk fuel tanks (33 Underground Storage Tanks and 11 Aboveground Storage Tanks) on 234 acres.  Most of the tanks were built in the 1940s. The fuel depot (tank farm and loading pier) is less than six miles west of Alki Beach in Seattle.

Records available from 2017 show over 75 million gallons of fuel stored at MFD.

While climate change and the threat of nuclear war are the two major threats to the future of humankind and life on our planet, their solutions are similar.  International cooperation to solve one of the problems—whether to abolish or tightly reduce nuclear weapons or to reduce greenhouse gas emissions—would greatly help with the solution of the other.

Our proximity to the largest number of deployed nuclear weapons in the U.S. at Bangor, and to the “Pentagon’s largest gas station” at Manchester, demands a deeper reflection and response to the threats of nuclear war and climate change.

A 2020 Freedom of Information Act response from the Navy to Ground Zero member Glen Milner showed that most of the fuel from the Manchester depot is sent to local military bases, presumably for training purposes or for military operations.  The vast majority of the fuel is sent to Naval Air Station Whidbey Island.  See  https://1drv.ms/b/s!Al8QqFnnE0369wT7wL20nsl0AFWy?e=KUxCcT

One F/A-18F, similar to the Blue Angels jets that fly each summer over Seattle, consumes approximately 1,100 gallons of jet fuel per hour.

The Pentagon recently shut down a fuel depot near Pearl Harbor in Hawaii that was built during the same time period as the Manchester depot.  The decision by Defense Secretary Lloyd Austin was based on a new Pentagon assessment, but was also in accordance with an order from Hawaii’s Department of Health to drain fuel from the tanks at the Red Hill Bulk Fuel Storage Facility.

The tanks had leaked into a drinking water well and contaminated water at Pearl Harbor homes and offices.  Nearly 6,000 people, mostly those living in military housing at or near Joint Base Pearl Harbor-Hickam were sickened, seeking treatment for nausea, headaches, rashes and other ailments. And 4,000 military families were forced out of their homes and are in hotels.