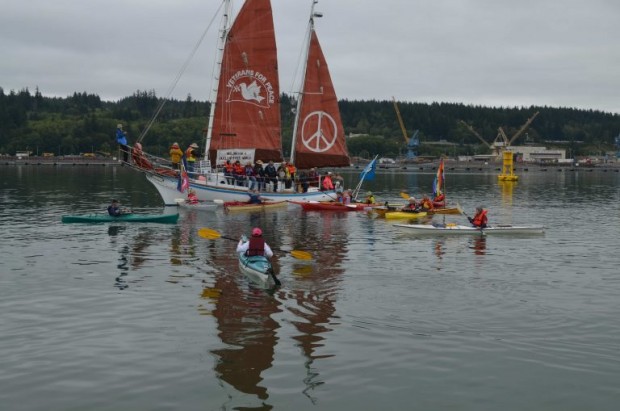 Above Photo: The Golden Rule and kayaks with OHIO Class (Trident) submarine visible in background at Naval Base Kitsap-Bangor Delta Pier on August 9th

Silverdale, Washington: Local peace activists staged a water-based nonviolent protest and witness for peace in Hood Canal at the Trident nuclear submarine base on August 9th marking the anniversary of the atomic bombing of Nagasaki. The activists travelled along the Bangor waterfront where nuclear warheads and Trident missiles are loaded onto submarines and where submarines are resupplied for ballistic missile patrols in the Pacific Ocean. On August 8th activists staged a vigil and nonviolent direct action in which some activists blocked the entrance gate to the same Naval base.

The August 9th peace flotilla, named “Boats by Bangor,” included the original peace ship, the Golden Rule, which set sail in 1958 to the South Pacific to stop nuclear weapons testing in the atmosphere. A National Project of Veterans for Peace, the Golden Rule continues to inspire many peacemakers and peace ships around the world.

The Golden Rule, skippered by Rich Giles, led kayaks and another sailboat, the S/V Silent, along the entire length of the waterfront of Naval Base Kitsap-Bangor, including the Delta Pier and the two Explosives Handling Wharves at Bangor where Trident submarines are maintained and nuclear warheads and Trident D-5 missiles are loaded into submarines.

The peace flotilla included 15 people aboard the Golden Rule, 5 people on S/V Silent, and 13 kayakers.

The flotilla was a collaborative effort by Ground Zero Center for Nonviolent Action and Veterans for Peace, and included members of the annual Pacific Northwest Interfaith Peace Walk led by the Bainbridge Island Nipponzan Myohoji Buddhist Temple.

Hood Canal is tightly controlled by the Navy with multiple easements from State agencies that restrict access and development near the submarine base, and with a series of federally established security zones that are enforced by Coast Guard, Navy, and Marine Corps personnel. Military personnel were courteous and professional in their interactions with the August 9th peace flotilla.

This was the first year for a large water-based presence since the first Trident submarine, the USS Ohio arrived at Bangor in 1982. The flotilla is part of a continuing effort by activists to lift the veil of secrecy involving nuclear weapons in Puget Sound.

The “Boats by Bangor” event followed an early-morning action on August 8th by Ground Zero Center for Nonviolent Action at the Main Gate to the Trident submarine base. While people vigiled on the roadside, and after Ground Zero Peacekeepers safely stopped traffic, four activists risked arrest by entering the roadway carrying banners and blocking traffic into the base.

Sue Ablao, Bremerton, WA and Mack Johnson, Silverdale, WA carried a banner identical to the bus ad currently running on Seattle Metro Transit buses that reads, “20 miles west of Seattle is the largest concentration of deployed nuclear weapons in the U.S.” The banner included a map with a line drawn from Bangor to Seattle.

Washington State Patrol officers removed Ablao and Johnson from the roadway, and shortly thereafter two more activists, Philip Davis, Bremerton WA and George Rodkey, Tacoma WA, entered the roadway carrying a banner that read “No More Genocide In My Name,” a reference to the atomic bombing of Nagasaki.

State Patrol removed Davis and Rodkey from the roadway, and issued all four activists citations for being in the roadway illegally and released them.

The two-day witness for peace at the nuclear submarine base marked the 71st anniversary of the atomic bombings of Hiroshima and Nagasaki, Japan.

The Trident submarine base at Bangor employs the largest concentration of deployed nuclear weapons in the U.S. and is the home port for 8 of the Navy’s 14 Trident nuclear powered submarines. More than 1,300 nuclear warheads are deployed on Trident D-5 missiles on SSBN submarines based at Bangor or stored at Strategic Weapons Facility Pacific (SWFPAC) at the Bangor submarine base.

One Trident SSBN submarine at Bangor is estimated to carry about 108 nuclear warheads. The W76 and W88 warheads at Bangor are equal respectively to 100 kilotons and 455 kilotons of TNT in destructive force. One submarine deployed at Bangor is equal to more than 1,400 Hiroshima sized nuclear bombs.

The nuclear warheads at SWFPAC and on submarines based at Bangor have the combined explosive power equivalent to more than 14,000 Hiroshima bombs.

On March 11, 2016, the 10th bi-annual Nuclear Deterrent Symposium was held in Silverdale to discuss the future of U.S. strategic forces. Rear Adm. Charles Richard criticized opposition to the Navy’s $100 billion plan for 12 new replacement SSBN submarines, proclaiming, “It’s a matter of priorities.” The new SSBNs would replace the submarines at Bangor. Rear Adm. Richards noted that the USS Ohio arrived at Bangor in 1982 to much protest, and stated, “We have taken that [nuclear weapons] out of the national psyche.”

Ground Zero Center for Nonviolent Action and Washington Physicians for Social Responsibility are involved in an environmental lawsuit against the Navy’s second Explosives Handling Wharf at Bangor. As a result of the lawsuit, plaintiffs discovered that while the Navy insisted the second wharf posed no new safety risk at the base, the federal agency responsible for explosives siting refused to grant approval. The case was filed in federal court in June 2012 and is currently pending in the 9th Circuit Court of Appeals.

On December 14, 2015, the Navy filed a lawsuit in federal court to block the release of emergency response plans that might benefit the public in the case of a nuclear accident at Bangor. The lawsuit is still pending.

The U.S. is currently spending more on nuclear weapons programs than during the height of the Cold War.

The U.S. currently plans to spend an estimated $1 trillion dollars over 30 years for rebuilding the nation’s nuclear facilities and modernizing nuclear weapons.

The New York Times reported that the U. S., Russia and China are aggressively pursuing a new generation of smaller and less destructive nuclear weapons. The buildups threaten to revive a Cold War-era arms race and unsettle the balance of power among nations.

On May 27, 2016, President Obama spoke in Hiroshima and called for an end to nuclear weapons. He said that the nuclear powers “…must have the courage to escape the logic of fear, and pursue a world without them.”  Obama added, “We must change our mindset about war itself.”

On July 30, 2016, the mayors of Hiroshima and Nagasaki sent a letter to the U.S. Embassy in Japan asking U.S. President Obama to step up his nuclear disarmament efforts.

The Ground Zero Center for Nonviolent Action was founded in 1977. The center is on 3.8 acres adjoining the Trident submarine base at Bangor, Washington. Ground Zero Center for Nonviolent Action offers the opportunity to explore the roots of violence and injustice in our world and to experience the transforming power of love through nonviolent direct action. We resist all nuclear weapons, especially the Trident ballistic missile system.