Above: Camilo Mejí speaking in Oakland. Photo by Bill Hackwell. 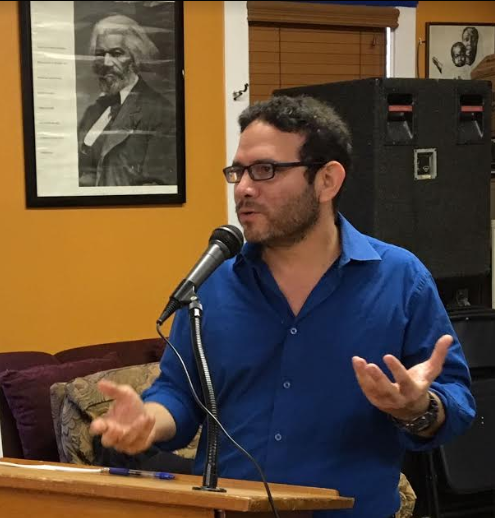 Camilo Mejía prefaced his explanation of the seemingly inexplicable eruption of violence in his native Nicaragua with the admonition that no one should take his word but should research the facts as he has.

Mejía spoke at an event co-sponsored by the Task Force on the Americas, a 32-year-old anti-imperialist human rights group with a long history of supporting the Nicaraguan Sandinistas against the US-backed Contra War.

Gerry Condon, president of the other co-sponsor, Veterans for Peace, explained how the national organization was founded in 1985 by US veterans in response to the global nuclear arms race and US military interventions in Nicaragua and elsewhere.

Condon introduced fellow Veterans for Peace member Mejía, who is a celebrated Amnesty International prisoner of conscience. In 2003, after serving in the US military in Iraq and seeing the hypocrisy of the regime change effort, Mejía refused redeployment and has since been a prominent leader in the peace movement. 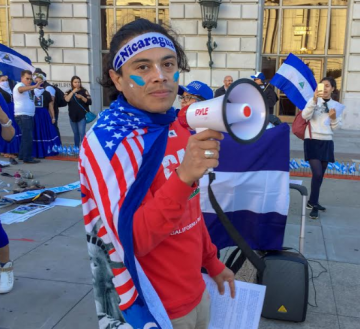 Mejía presented a history of US regime change operations engineered by the CIA and more recently by US government surrogates for the CIA such at the USAID and the National Endowment for Democracy (NED). Non-governmental organizations (NGOs) funded by the USAID, NED and kindred groups are among the leadership of those trying to overthrow the democratically elected government of Nicaragua.

Mejía drew attention to similar regime-change programs by the US in Venezuela and the similarity of the media disinformation and violent guarimbas there to what is happening now in his home country.

Mejía showed well-authenticated video clips of Sandinistas in Nicaragua being tortured by opposition elements, demonstrating how sections of the opposition to the Ortega government have not only been violent but cruel. Particularly disturbing was footage of a Sandinista who had been assassinated and whose body was publicly burned in the street. 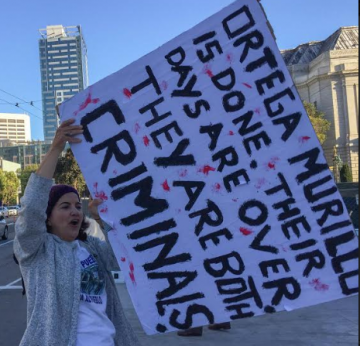 The Sandinista Renovation Movement (MRS), Mejía explained, split from the main party and took with it most of the English-speaking intellectuals who had close relations with North American solidarity activists. The MRS has never been a popular electoral force in Nicaragua, garnering only 1.3% of the vote at its peak, but has turned to the right and aligned with US-backed extra-parliamentary means of changing what both consider the authoritarian regime of President Ortega.

To promote dialogue among those who seek peace in Nicaragua, but differ on whether to support the extra-legal overthrow of the Ortega government, the event sponsors gave Amy Bank time to present the other side. Bank, a North American, had formerly supported the Sandinistas. She granted that the Ortega government had achieved considerable material gains toward eradicating poverty and uplifting social conditions but had turned authoritarian.

Meanwhile, the advocates of regime change organized by the ad hoc Bay Area Autoconvocadxs held a well-attended and organized demonstration in front of the San Francisco Veterans Building, where the talk was being held. Mainly composed of expat Nicaraguans in a marriage of convenience between former supporters of the Sandinistas and the Contras, the prior mortal enemies were now united in their mutual hatred of the Ortega government.

The anti-Ortega demonstrators later filtered into the now standing-room-only lecture hall, periodically heckling Mejía. Scattered applause came from the opposition demonstrators at the mention of the US-backed Contras, showing the allegiance of some of them.

Calmly and graciously, Mejía welcomed the opposition elements and even allowed a senior woman who had been a Sandinista to take the microphone and make an impassioned appeal for regime change. But when the opposition elements became intolerantly disruptive to the expression of views contrary to their own, Mejía admonished: “By your actions, you demonstrate what kind of democracy you stand for.”