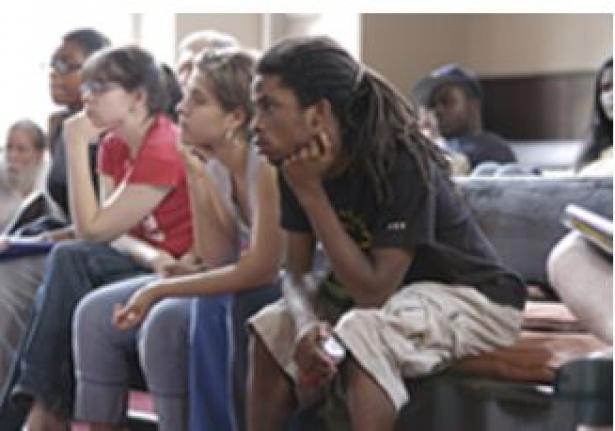 Above photo: Students of the AFSC Peace Education Program.

What if all our schools required training in skilled, non-violent conflict resolution as a form of peace literacy and moral awareness for their students.

Would that not be one of the most useful education skills for life that we could give them?

Philadelphia is awash in guns: More people were shot there in 2022, hundreds fatally, than in larger cities including New York and Los Angeles.  In this “country’s poorest big city,” most shootings take place in neighborhoods shattered by multiple forms of racial discrimination and endemic poverty. The market in legal gun sales is also booming in Philadelphia, the culture of fear driving citizens to carry guns for safety.  Further complicating solutions is the disagreement between the progressive district attorney and the chief of police over models of crime enforcement in the city

On the other side of our country, a miraculous alternative to the seeming nihilism of West and North Philadelphia neighborhoods breeds hope.  The winter 2022 Boston College magazine carries the story of Fr. Gregory Boyle who began working 34 years ago as a pastor in the poorest neighborhood in Los Angeles, one with the highest gang activity; “shootings morning, noon and night;” and many teenage burials.  He started a school at his church for youth dropped out or expelled from their schools, offering a growing number of services. Beginning with Homeboy Bakery, he initiated nine more businesses employing youth from rival gangs under the umbrella of Homeboy Industries.  The program, which helped lower the gang-related homicide rate in LA, is “the largest gang intervention, rehab and reentry program in the world.”

A simple wisdom infuses Fr. Boyle’s success: “I’ve learned that kindness is a universal language…Seemingly small acts like visiting people in the hospital or juvenile hall are never forgotten. I’ve also learned that violence is often sparked by a lethal absence of hope…At Homeboy, we seek to cherish the wounded…because making someone feel cherished often leads them to the best version of themselves.”

Many studies and lived experiences, like Fr. Boyle’s, refute the prevailing perception that violence–whether male violence against women, gang violence, or war between countries–is inevitable.  Among those challenging the inevitability of human violence is West Point graduate, Iraq war veteran, and now peace activist Paul Chappell, who has dedicated his life to incorporating peace literacy into educational curricula. In his book Soldiers of Peace Chappell observed that he had 12 years of math through Calculus II, yet uses few of his math skills in daily life; but he graduated from high school illiterate in peace, a literacy he desperately needed.

As a mixed race, Korean/African-American/white child growing up in Alabama, he felt himself a racial outcast. By high school, he was full of rage.  He reflects with irony and regret that “the education system had not given me a single hour of training to help me understand the nature of rage… In fact, much of what I learned in school taught me to suppress my empathy and conscience and to view purpose in the narrow context of accumulating material wealth.”

Peace literacy is as crucial as learning reading, writing and mathematics, and it cannot be left only to parents, Chappell cautions. Schools must teach the history of strategic campaigns that won civil rights and women’s rights; the arts of listening, asking questions to achieve clarity and understanding, cultivating empathy and mutual communication; the skills of disciplined resolution of conflict and recognizing verbal and advertising manipulation. As Gandhi avowed, “If peace schooling were taken as seriously as military schooling, our world would be a much different place.”

Among many who have enrolled in the training are students in grades 8-12 in both public and private schools.  Those trained gain insight and skills needed if they decide to act when they witness something they think is unfair, or wrong, or troubling.  The training prompts participants to recognize those who create harmful situations, those who are the targets and those who witness it as bystanders. They discuss what inhibits bystanders who stay silent and then guide participants to create action plans to overcome their silence.  The training encourages them to examine what’s needed to become active in addressing the harm in the situation – moral courage, inclusive caring, responsibility for others, reciprocity – and assists participants to discover their constructive power.  Lastly, participants are supported in developing a variety of intervention techniques, with the goal of analyzing situations in the future and acting when harm doing is encountered.

What if all our schools required this training in skilled, non-violent conflict resolution as a form of peace literacy and moral awareness for their students. Would that not be one of the most useful education skills for life that we could give them?  Good for them and good for the society they inhabit and will impact.

Peace literacy correlates with larger conflicts at the country and international level.  “Waging war is not an innate part of human nature…we are just as likely to be peaceful as we are to be violent,” concludes author of The End of War John Horgan.  War is relatively new, beginning about 10-12,000 years ago and is “a very recent cultural innovation and…not something that then became permanent in all human societies.”  Further, societies that were once extremely warlike are now peaceful (for example, the countries of Scandinavia and the tribes of the Iroquois; Ireland, Austria, and Switzerland are neutral Western European countries, not members of NATO; and Costa Rica has eliminated its military in a hemispheric region where conflict has been rife).

Post-World War II surveys found that the majority of US soldiers on the battlefield in World War II did not fire their weapons or fired them so as to miss a human target out of a resistance to killing.  With these findings, a shocked Army command revamped its training in order to intensify firing rates by combat soldiers in future wars. In training, they used human-like targets, de-personified the enemy, and engendered altruism in killing for one’s fellow soldiers. But with boosted rates of shooting other human beings in combat as documented in Vietnam, PTSD increased in soldiers from the moral injury of killing other human beings.

Experts who have studied the history of violent and non-violent responses to conflict have found that violence is not the most effective nor successful way to resolve country-level disputes.  Recent landmark research by Dr. Erica Chenoweth and Dr. Maria Stephan has found that “Nonviolence is more likely than violence to defeat a militarily superior adversary.” Their study of movements from 1900 through 2006 to overthrow dictatorships, expel foreign occupations or achieve self-determination revealed that nonviolent resistance campaigns were more than twice as successful as violent insurrections with the same goals. And the trend is increasing even in extremely brutal authoritarian conditions.

A final piece of wisdom about sustaining peace following violent conflict comes from one who gained her expertise through innovative conflict resolution and persistent peace building. Liberian Nobel Peace Prize winner Leymah Gbowee, brought Christian and Muslim women together in her country to end its vicious 14-year-long civil war. According to Gbowee, interventions and sanctions to maintain or restore international peace and security have been most effective when they are applied as part of a comprehensive strategy encompassing peacekeeping, peace building and peacemaking.

“While the dynamics of conflict are widely publicized, the civic foundations of creating and maintaining peace are far less articulated or understood,” says Leymah Gbowee.   “Stopping a war does not bring lasting peace. Whether done though community organizing, expressing dissent, teaching peace and nonviolence, or prioritizing more basic issues of gender equality and environmental protection, peacebuilding is now an urgent necessity.

Coming full circle, what if all our schools required training in skilled, non-violent conflict resolution as a form of peace literacy and moral awareness for their students. Would that not be one of the most useful education skills for life that we could give them?  Good for them and good for the society they inhabit and will impact.

Pat Hynes, a retired Professor of Environmental Health, from Boston University, is a board member of the Traprock Center for Peace and Justice and a member of Women’s International League for Peace and Freedom.  Her new book, Hope, But Demand Justice, is available from Haley’s Publishing.