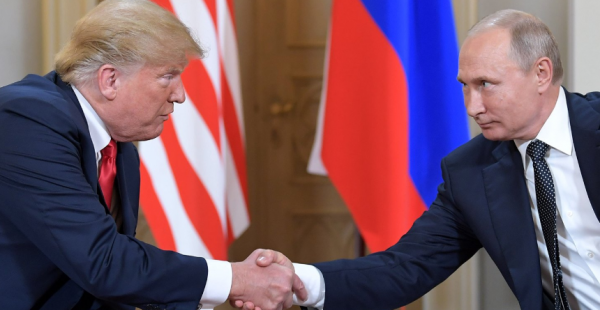 Above and below: Vladimir Putin’s meeting with Donald Trump

Note: We found the message and speech below in reaction to the Trump-Putin meeting inspiring. Their first official meeting is not the end, but the beginning. It is important for those who want to end war, rid the world of nuclear weapons and create a world without war, to push Trump further toward détente and agreements on peaceful steps in Syria, North Korea, Iran, Ukraine, Venezuela as well as on the African Continent, Latin America and in outer space.

There will be pushback from the militarists that dominate Washington, DC as well as the corporate interests that profit from war. Fear-mongering about Russiagate and name-calling of President Putin will be used to oppose détente between the US and Russia. The peace movement needs to push back against the elites who fear peace breaking out.

Here is a link to the full written transcript of the press conference of Trump and Putin yesterday in Helsinki  and you can view the press conference here. It is embarrassing that the US media did not ask about nuclear weapons, the escalating military budget, conflicts in Syria and threats of conflict in Iran or the peace negotiations in North Korea, but focused on Russiagate. The media is treating the Mueller indictment of Russian intelligence officers as if it is a conviction. An indictment is an accusation, not a finding of guilt.

Below is an email from Charles K. Johnson, the Director of Nuclear Programs of the International Physicians for the Prevention of Nuclear War, which won the 1985 Nobel Peace Prize. He is introducing a video from a Finnish peace activist in response to the Trump-Putin meeting. It is a good place for the movement to begin working toward a true detente between the US and Russia.

On a day that the US President sided with the Russian President against his own intelligence agencies and justice department over Russian interference in US elections and is now flying home to a bewildered and angry US establishment (while the Russian leadership applauds him), here is a speech in Finland from one of IPPNW’S earliest leaders, Ilkka Taipale.

Lost in the media feeding frenzy of the day is a wonderful opening quote from Ilkka.  In welcoming the Russian and US leaders, he said:

“First of all, let me congratulate you on your great achievement – which neither you nor anybody else has noticed. You have awakened humanity from years of deep hibernation. And let’s not forget the North Korean leader, Kim Jong Un. Together you have reminded the peoples of the world about the existence of nuclear weapons. The greatest threat today is not global warming but nuclear weapons and the danger of nuclear war.

Your colourful speeches have let the genie out the bottle. The spirit of nuclear disarmament has escaped, and can no longer be shut away.”

Sorting through the chaos of the day and this week, let us seek to make these inspiring words come true.

Together we will ban nuclear weapons. 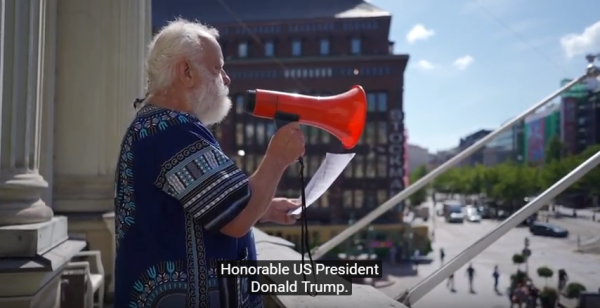 Former MP, half a year as an activist of the international peace movement Ilkka Taipale (SD), greeted the Russian and US presidents. According to the story, the video depicted on the balcony of the Old Student House is a salute of the Finnish Peace Movement to Trump and Putin.

– I held a long speech at President Ronald Reagan’s visit to Finland in neighbor Peru at Perunator. The most suitable place is the Old Student House, which has a historic significance due to the events of 1968. It could be said that this is also a greeting to the world peace movement because the nuclear issue concerns the whole world, says Taipale.

In his speech, Taipale tells President Trump that with his colorful speech he opened Pandora’s box and let go of the ghost of nuclear disarmament.

The parquet floor is already the second in Taipalee. The last time he spoke at the Helsinki Workers’ Lounge on 26 November. 2017. At the Workplace’s balcony, one hundred years before the Break was spoken by only the future Soviet dictator Josif Stalin and about eighty years later, SDP’s former MP Arja Alho .

The video can be selected in English or in Finnish: