One more weekend and reality continues its triumphal march through Nicaragua. It was a weekend full of activities for families and tributes to the heroes and martyrs who brought about a free and sovereign Nicaragua. On June 16, opposition businessman Michael Healy confirmed that last year’s coup plotters are returning to the negotiating table with the government.

Contrary to opposition propaganda, the demonizing discourse of the opposition against the Sandinista government has no place in the United Nations.

June 14, Nicaragua was elected member of the Economic and Social Council of the United Nations (ECOSOC). This honor was probably based on Nicaragua’s development and poverty reduction over the last decade. This council of 54 countries from all regions of the world, created in 1945, is one of the six main organs of the UN and is responsible for two major tasks: Promoting sustainable development and following up on the results of the major UN conferences and summits.

184 of the 193 member nations of the United Nations (190 voters) considered our country a worthy representative of Latin America in that forum. The other two Latin American nations elected were Colombia, with 172 votes, and Panama, with 171. In other words, only a handful of countries in the world follow the script of the US-backed coup plotters against Nicaragua.

Mexican businessman Carlos Slim told Economic Advisor, Bayardo Arce on June 14, on a visit to the Aztec nation, that his investments in Nicaragua will continue, and are long-term.

The generation of photovoltaic (solar) energy is gaining momentum in the country which already has four solar plants to which will be added one more with a projected capacity of 50 MW and will become the largest in the country. This plant will be located between San Benito and Tipitapa just northeast of Managua. Today more than 60% of electricity generation in Nicaragua is clean energy.

The Nicaraguan government continued to support small and medium producers, among other things with backpack pumps for small farmers in the Caribbean region, improved seeds resistant to coffee rust in the North, and a Plan for the Promotion of Creative Enterprises, such as gardens, nurseries, butterflies and orchids in the rest of the country.

There were a couple of failed provocations by the opposition on June 15.

In the colonial city of León a small group tried to cause problems in the center of the city but several hundred Sandinistas mobilized instantly and forced them into the Cathedral. The priests of Leon asked the National Police to escort the group and take them out of the church. In Managua, violent groups concentrated in the Cathedral, without major incidents.

Nicaraguans in Costa Rica’s capital literally took over the stands at the National Stadium to cheer for the Nicaraguan soccer team, which lost 4-0 to the locals – a not unexpected defeat. Meanwhile, in Managua, people flocked to bars and restaurants to watch the game.

There were all kinds of recreational activities this weekend: 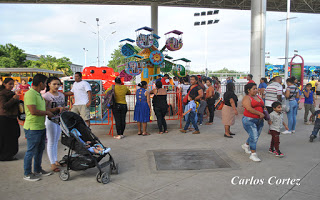 Water games, rides and skating rinks in the Luis Alfonso Velazquez Flores Park; an international race with 1,000 athletes in commemoration of the Repliegue to Masaya; the National Kickball Championship for women in Managua; the II Bodybuilding Championship at the Alexis Argüello Sports Center; The First Novice Children’s Swimming Championship in the Michelle Richardson swimming pool complex; a National Cocoa Fair in the Revolution Square and reopening of the Farmers’ Market in the National Park of Fairs to name a few. 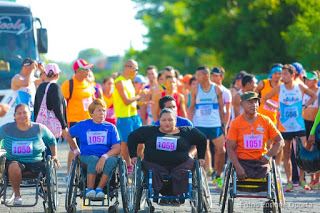 However, this was not only a weekend of recreation, there was also commemoration of the 40th anniversary of revolutionary history with massive events in different parts of the country: 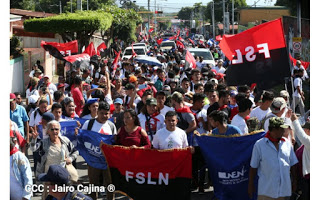 June 16, a crowd gathered in “Colonia 9 de Junio” neighborhood in district 7 of Managua, to unveil a monument to the memory of Francisco Aráuz Pineda, one year after he was murdered by the coup plotters who burned his body and published their crime on social networks as if it were a feat.

June 15, a tide of youth and families gathered in Managua’s historic San Judas neighborhood to relive the strategic retreat to the El Vapor hacienda 40 years after the Sandinista guerrillas carried out this action to try to save lives in the struggle against the Somoza dictatorship. 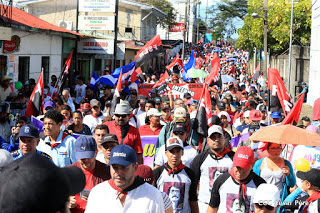 June 14, thousands of Sandinistas walked more than 11 kilometers from downtown Diriamba to the community of San Gregorio to remember the same strategic retreat cone by the FSLN guerrillas before the liberation of this city. At the end of the walk, those present ratified the historic project of the FSLN.

June 15, an article in the Spanish newspaper El Mundo, described Nicaragua as the ‘cool’ tourist destination in Latin America and states that tourists have returned to the country after the failed “soft coup” of last year.

These are just a few brushstrokes that illustrate the situation that exists today in Nicaragua, one that is silenced or hidden by the major Western media.