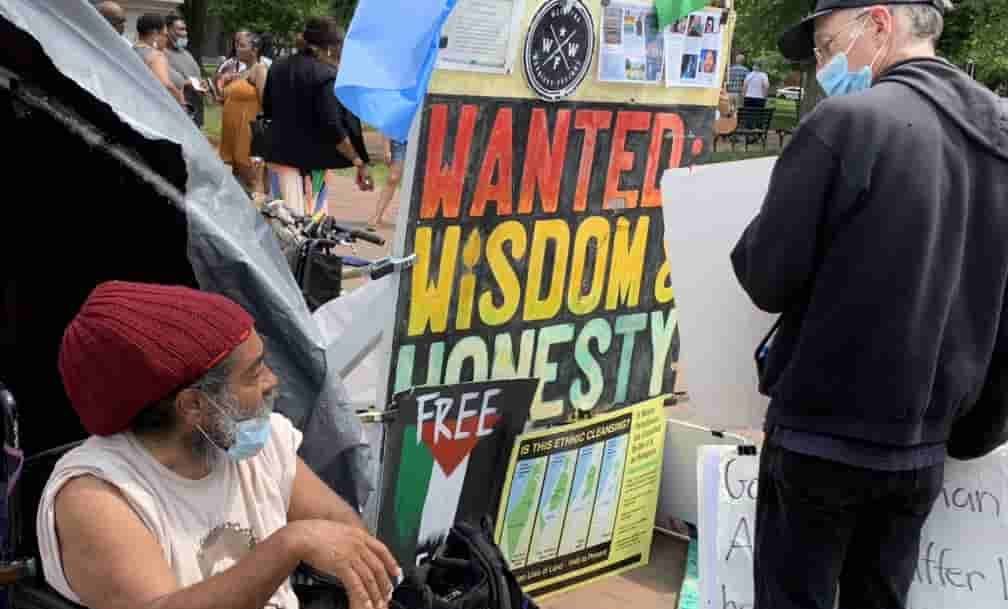 Washington DC — The Activists at the Peace Vigil cut cake and shared stories of their experiences at the nation’s longest running vigil for peace near the White House on June 3. It was on this date in 1981 when William Thomas began his 24-hour vigil against nuclear weapons and the war machine 4 decades ago. His vision to keep watch on the North Portico with a round-the-clock presence at the White House and to pressure then President Ronald Reagan to decommission nuclear weapons and to work for world peace, has lasted through seven presidencies. Nobody expected it to last this long but it has endured against improbable odds.

Year of Pandemic and Riots Did Not Stop Peace Vigil

The last year has been one of the toughest challenges the Peace Vigil has faced, according to Philipos Melaku-Bello, manager of the Vigil. He recounted the challenges of the civil unrest and the closure of Lafayette Park which forced the activists out of the park—onto H Street at Black Lives Matter Plaza—and face to face with daily clashes between police and protesters, nights of raids and tear gas, disgruntled counter protests, and uncertainty as to whether the Peace Vigil could continue its presence there. The pandemic also took its toll as there were months of few visitors and times when few activists who could staff the Peace Vigil.

Then on May 19 Lafayette Park was reopened and the activists gathered to rebuild the tent spine of pvc pipes and install the tent canvas and it resumed its place on the red bricks across from the North Portico of the White House. Melaku-Bello affectionately named the activists who stood with him over their year of banishment from Lafayette Park and one by one, he recalled their selfless efforts to be there to help him maintain a steady presence just outside the park edge. It occurred to him that the Peace Vigil could not continue without the Peace Activists who replaced him during the shifts he was not there and he was very thankful.

But he says putting in the hours on the red-bricked sidewalk is not about him or about any one person but about the message of peace, disarmament, and continuing efforts to decommission nuclear weapons and close down nuclear power plants. He recites the facts of Hiroshima and Nagasaki as they are ingrained in his memory like his birthday and age and he argues their history is a warning of the last seconds ticking on the “doomsday clock.” He knows the details of Chernobyl, Fukushima, and Three Mile Island, as if they are his children and tells visitors why it is past time to scrap such projects forever.

Beyond the obvious destruction and calamities of war he tells of the defense of human rights and the rights of oppressed people that the Peace Vigil represents in his conversations with multitudes of multinational visitors who happen by the Peace Vigil tent. The signs around the front of the tent condemn tyranny and rebuke tyrants by raising up individuals such as Brianna Taylor and George Floyd. The advocates working there reject despots and authoritarianism by standing up for the human rights of the oppressed. The signs, “War is Not the Answer,” “Wanted: Wisdom and Honesty,” and “Free Speech Zone” and the photos of the aftermath of Hiroshima attract a wide range of people to ask why the Peace Vigil is there.Melaku-Bello is in his zone when they inquire why he is there and he tells the stories about the vigil and its founder, William Thomas, and his messages for common good that peace would bring.

Melaku-Bello has a knack for engaging an impressive range of people, young and old and speaks six languages fluently. He has years of practice speaking with anyone who wants to talk. A pair of men from Nigeria visiting the U.S. for the first time are taken aback by his knowledge of their country and they speak at length about past Nigerian political leaders. A group of five young women for Colorado University engage him for a while, impressed with his message of denuclearization. Someday they may return to Washington DC to visit, perhaps with their children.Melaku-Bello wonders aloud if the Peace Vigil will still be there for them to visit when they return. He leaves a deep impression on them as he does with many and they take a photograph with him—he holds up his hand in a customary peace sign.

Is Time Is Running Out For Peace?

Time is not on the side of waging peace. It is not on Philipos’ side either. His years of dedication to the Peace Vigil has cost him dearly in terms of his health and longevity. Snowy cold days with occasional blizzards, days of blazing hot sun, rain and wind, and a few hurricanes have worsened his health and he is in need of funds both to run the Peace Vigil and for medical attention. He wishes to be there indefinitely but knows time is catching up with him and his body is challenged by the elements. Time is a strange thing he laments. We have more than we think but don’t have as much as we’d like.

The Spirit of William “Doubting” Thomas

One might say there is a little bit of William Thomas in Philipos and all of the activists who staff the Peace Vigil. All of them have an indomitable resilience like Thomas did. The long hours of staffing the tent are one thing. But another is the cacophony of opinions from visitors about the political structure of the world that comes with the flow of visitors on an average day and it can wear one down over time. Arguments are frequent in a time of waxing and waning civility. The last four years of the previous administration brought much acrimony to Lafayette Park.

William Thomas overcame challenges like these by educating himself on a range of topics to support and spread the message he carried. He traveled to Africa during the famine of the 1980s and to Asia and other parts of the world to gain a first-hand understanding of challenges facing humanity.

When he began his Peace Vigil on June 3, 1981, it was against world hunger as well as nuclear disarmament. Police kept arresting him and the other the vigilers who stood with him because they stood up where no one dared before—right outside the White House gates—24-7. So he fought back by studying the law. He sued the government pro se to stop the arrests and after many court appearances he won a permanent permit to remain on the red bricks. He also challenged the government in the courts over signage and won on that accord as well, guaranteeing his right to maintain two large permanent signs, as long as they did not exceed a 6 foot height. He was arrested over 40 times standing for peace and human rights before his permanent permit was granted.

William Thomas’ peace activism also helped inspire Congresswoman Eleanor Holmes-Norton’s legislation to abolish nuclear weapons which she has been reintroducing every year since 1994. Her bill, HR-2850, the “Nuclear Weapons Abolition and Economic and Energy Conversion Act,” seeks to abolish nuclear weapons and provides that no taxes paid by the residents of Washington DC shall be used for war.

William Thomas died in January 2009 but his spirit lives in the tenacity of the activists who have succeeded him.

Lou Wolf, a longtime Vigiler and peace activist, who has worked on Covert Action Magazine publication since the 1980s, said “As lifelong peace advocates we, the worldwide peace movement, are as big as the world movement. But we stand for peace and justice, not only peace by itself.”

The Peace Vigil will continue celebrating its 40th anniversary this year and the activists are thrilled to be a part of this historic moment. They are inviting the public to share their story and message of world peace and nuclear disarmament. Their cutting the peace cake and sharing lunch and telling stories of the most challenging year the Peace Vigil has yet faced is just the beginning of plans to reach out to others to join them in the message of peace and human rights. A recording of their event with photos and videos can be seen hosted on zoom and on social media here.

You may also donate to the Peace Vigil to help repair the signs here with the cash app $WHPV for cash donations. Any amount no matter how small will help.

Video newsreel of the 40th anniversary celebration at the Peace Vigil on June 3: