On Sunday At exactly 7:02 PM, peace activists Philipos Melaku-Bello and Cliff Roberts sit quietly at the Peace Vigil in front of the North Portico of the White House. They mark the moment when 72 years ago the U.S. dropped the first atomic bomb on Hiroshima.

But this historic day passes at the White House in typical form. If not for the Peace Vigil activists, there would be no one to remind the passers by of its significance.

The many flags, signs and photos at the Peace Vigil could easily lead to confusion as to why it is there. There are over a dozen posters with different messages about war, occupation, politics, and oppression. Reprinted photos of the attack aftermaths on Hiroshima and Nagaskaki are attached to the two permanent wooden boards of the Peace Vigil. Above them are three flags: a large silk Tibetan flag hangs on the left sign, and an anarchist flag sags on the right, while a small plastic American flag sits in the middle above the tent. The signs and flags embody principles that both compliment and contradict each other and this is essence of discourse at the Peace Vigil. Several hundred tourists are milling about while posing for selfies. Black barricades line up along the iron fence, separating the White House lawn from tourists, while several Secret Service officers keep watch. Nearby a man hawks his vaudeville dance routine for a few dollars as he loudly plays popular dance tunes on a speaker. A few feet away, another man dressed in a robe, kneels on a carpet, bows, and yells ‘Allah-u-Akbar’ while he faces East. The vaudeville act contests with the religious intonations for freedom to be heard. Neither seem to take notice of each other.

Several youth approach the Peace Vigil curious as to why it is there while their parents wait behind them watching. Melaku-Bello welcomes and queries where they are from and what grades they are in. Both are from the New Jersey and high school freshman but by their size they could be older. They tell him what they know about Hiroshima but don’t know how many nuclear weapons there are. Melaku-Bello gives them a short history lesson complete with statistics about the numbers of weapons and rattles off the countries responsible for them. He tells his lesson by heart. On this day it is the only issue they talk about.

When it comes to speaking about nuclear weapons, Melaku-Bello is skilled as a teacher, drawing on decades of activism and front-line protest experience. Through his activism he educates the young of the next generation, one person at a time, gently prodding them into an understanding of war as they seek their own truth. Perhaps his teachings will influence a future leader in a decision to change the way things are. 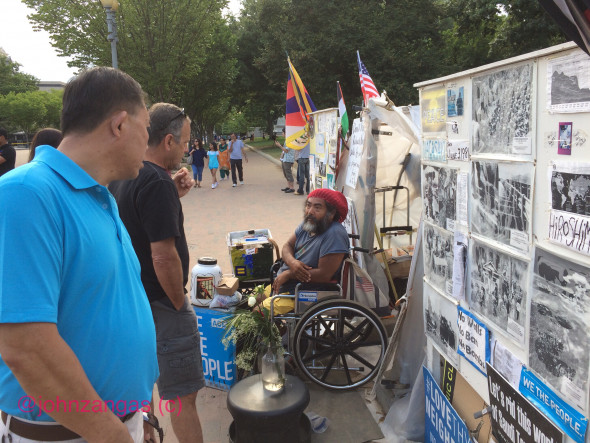 Similar conversations go on with adults but don’t come as easily and sometimes don’t end well. There’s much less room for convincing when opinions are already formed. Most are already decidedly left or right leaning, independent or green, for or against the military and nuclear weapons. It’s not uncommon for discussions to flare to arguments.The youth listen intently and seem surprised there are still so many weapons left in the world. Eventually their parents come to retrieve them, thank Melaku-Bello, leave a dollar donation in a bucket and are gone. 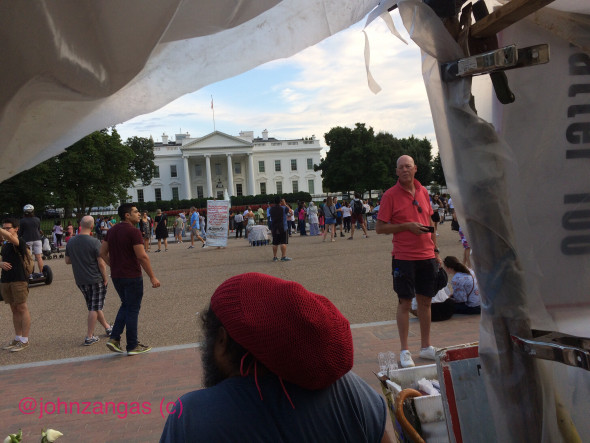 View of the White House from inside the Peace Vigil tent. Photo: John Zangas

Melaku-Bello recounts previous years activists held ceremonies commemorating Hiroshima. Kio Kanda, an 83 year old Japanese activist, and former resident of Hiroshima Prefecture, was eleven years old when the atomic bomb was dropped. He usually comes to the Peace Vigil to take part in the annual ceremony to mark that day. Kanda always recollects the aftermath of the attack in his story but this year he does not come to the Peace Vigil to share his story. This year there is no ceremony. 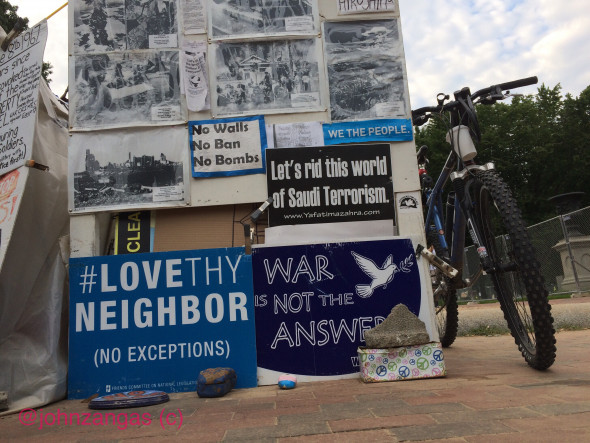 A cacophony of messages surround photos of Hiroshima and Nagasaki at the Peace Vigil. Photo: John Zangas

To support the Peace Vigil go to its Facebook page “Peace Vigil and Nuclear Protest” or donate here
.