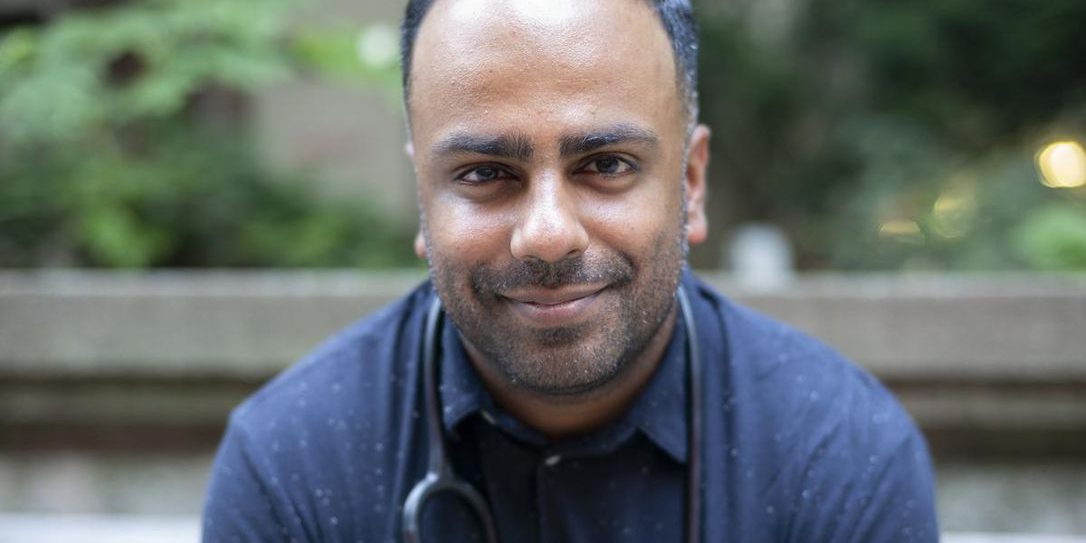 NOTE: The program described in the article is an example of what can exist when a country has a functioning public health system. A health problem is identified and the government funds a solution to it. People are treated as if their health and quality of life matter. This article is also important because it encourages health professionals to be political – a lesson more health professionals in the United States need to heed.  – MF

A child of refugees who fled war-torn Uganda in the 1970s, a young Naheed Dosani grew up having conversations about social injustice, inequity and poverty at the family’s Scarborough home. “I have always pondered what a life is worth,” he says, “and why our health and social systems are designed to value some lives over those of others.”

This was especially the case after the challenges of the last year. A palliative care physician who works with some of the city’s most vulnerable, Dosani said that “COVID-19 has disproportionately impacted people who experience structural vulnerabilities. Pandemics are like guided missiles. They target the most vulnerable. The disproportionate effects of COVID-19 on three groups — racialized communities, essential workers and people who experience homelessness — are all textbook examples of its devastating impact.”

In 2011, Dosani — by then graduated from McMaster University’s medical school — met a man who changed the course of his life. Terry, in his early 30s, was homeless, had mental health and addiction issues, and terminal cancer. In his first year of residency while training at a homeless shelter, Dosani worked with Terry to develop a pain management plan that offered hope for comfort in the final stages of his disease, but returned to the shelter to learn Terry died of an overdose on the street.

“Terry fell through the cracks of our health care system,” says Dosani, who was profoundly impacted by the man’s death. “I was disappointed in medicine, health care and society.”

Wanting to understand the gaps that exist for homeless and vulnerably housed people, the Toronto resident researched clinical models that addressed the intersection of palliative care and homelessness. He found very few. And so, the seed for Palliative Education And Care for the Homeless (PEACH) was planted, and he decided to focus his final year of medical training to become a palliative care physician. With passionate colleagues, Dosani launched PEACH in July 2014.

Based out of the Inner City Health Associates and funded by Ontario’s Ministry of Health, PEACH brings housing, mental health and health-care professionals together to provide community-based hospice palliative care to the city’s most vulnerable, regardless of their housing status or factors such as poverty or substance use. The PEACH team — five palliative care physicians, a psychiatrist, a social worker, a nurse co-ordinator and an interdisciplinary home care team including nurses, PSWs, OTs and PTs — provide 24-hour service at more than 25 sites (shelters, respites, drop-ins and rooming houses) across the city.

“Living on the streets is hard. Living on the streets with a serious and terminal illness can be even harder,” said Dosani. “They don’t have the structural supports that so many of us take for granted. For example, if a person experiencing homelessness has Stage 4 cancer, and the doctor prescribes medicines for pain, nausea and constipation, where would they safely store medications if they don’t have a home or safe space?”

And, as the numbers show, PEACH has seen success. Visits to emergency rooms has dropped by 64 per cent. Eighty per cent of PEACH clients approach end of life where they want to, and 83 per cent of the time, clients reconnect with family and friends. The program has also inspired similar movements in Edmonton, Calgary, Victoria, Seattle and Australia.

In addition to being the lead physician at PEACH, Dosani, only 36, is the health equity lead at Kensington Health; medical director of the Peel Region’s COVID-19 Housing/Isolation Program; and a lecturer in the Division of Palliative Care at U of T’s Department of Family and Community Medicine. He’s been recognized with many awards, including the Gov.-General of Canada’s Meritorious Service Cross for Humanitarianism in 2018; the Canadian Society of Palliative Care Physicians Humanitarian Award in 2019; and an Early Career Leader award from the Canadian Medical Association and the U of T Faculty of Medicine Humanitarian Award in 2020.

Along with his many accolades, Dosani has a large online following, with a combined 57,000 followers on Twitter (@naheedd) and Instagram (@naheedd) — which he uses to destigmatize homelessness and poverty. He hopes this will spark dialogue in the media and among policy-makers, especially in the time of COVID-19. “My hope is that in the time between this public health crisis and the next one, we will address the inequities that create these results so the communities we serve will not have to suffer the same way again,” he said.

Dosani says society is in the early stages of looking at inequities in the social determinants of health, and dismantling the structures that perpetuate them. “We need to get rid of the notion of the apolitical doctor who is told, ‘stay in your lane,’” he says. “Harm reduction, anti-racist health care and trauma-informed approaches to care through social justice is our lane.”