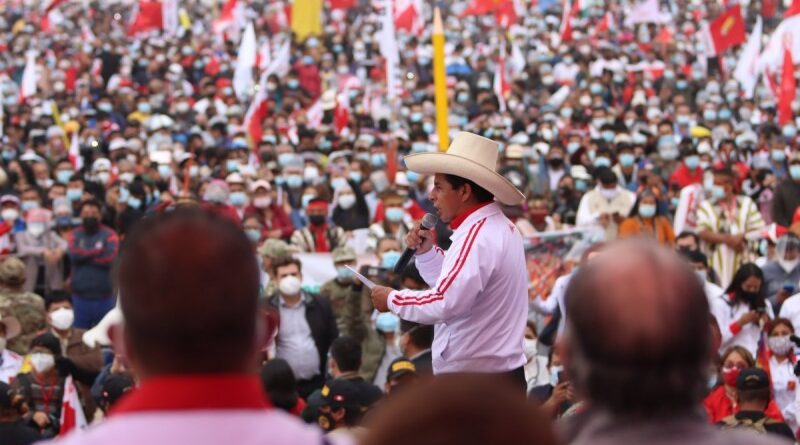 There is good reason to believe that Pedro Castillo will not betray the Peruvians of humble origin who elected him.

Peru’s long-standing polarity between a large extension of coastal region, where the nation’s wealth is concentrated, and the much-neglected interior was on full display in the June 6 presidential election. But the polarity was not just geographical. It wasn’t just that the winning candidate, Pedro Castillo, received the lion’s share of his votes from the interior, known as the “Other Peru.” Nor that Lima and other coastal cities favored Keiko Fujimori, particularly in middle class districts. The election also pitted two candidates with very dissimilar backgrounds against each other: Fujimori, a former first lady and three-time presidential candidate with the solid support of the nation’s elite, against Castillo, who is the epitome of an outsider. Castillo, a primary school teacher since the age of 25, has never held an elected office.

Castillo’s platform included a second agrarian reform (the first was passed by a nationalistic government in 1969), the possible nationalization of the nation’s gas reserves (second in quantity in Latin America), creation of a state-owned national airline, and a constituent assembly to replace the constitution promulgated under Fujimori’s father, Alberto Fujimori, in the 1990s. In contrast, Keiko Fujimori, like her father, champions neoliberalism.

Castillo won with a razor thin margin of less than half a percentage point. Following in Trump’s footsteps, Fujimori claimed fraud and demanded a recount of approximately 200,000 votes, undoubtedly in order to save face and rally her supporters.

A smear campaign against Castillo for being an ally of Cuba, Russia and Venezuela as well as ofterrorists found an echo chamber in the nation’s mainstream media. Castillo was accused of having ties with the Shining Path guerrillas, even though he had belonged to the Ronda Campesina, a rural civilian patrol group which vigorously and effectively combatted the murderous guerrillas. Lima’s influential daily El Comercio ran an investigative article replete with documents purporting to show that a Shining Path front group had infiltrated Castillo’s union and the party, Peru Libre, that backed him. The aim of the subversives was (in the words of an ex-minister of the Interior) “to find spaces to proceed with the only thing they know how to do: radical politics.”

Castillo’s status as an outsider is of utmost significance. Like Brazil’s Lula and Bolivia’s Evo Morales, but unlike other Latin American left-leaning presidents such as Ecuador’s Rafael Correa, Argentina’s Alberto Fernández and Mexico’s Andrés Manuel López Obrador, Castillo emerged as a social movement leader and, most important, as the head of a dissident teachers’ union. Castillo was thrust onto the national stage in 2017 when he led an historic 70-day nationwide teachers strike, which attempted to halt school privatizations and rescind legislation that submitted public teachers to obligatory performance reviews.

Fujimori’s unfounded claims of fraud, like those of Trump in 2020, serve a hidden purpose. Fujimori’s outcry of foul play undermines Castillo’s legitimacy as president and places him on the defensive. This tactic didn’t work in the case of Trump because Biden had a majority in congress and was as mainstream as you can get. Peru Libre, on the other hand, has merely 37 of the 130 seats in congress. To make matters worse, financial markets were shaken by Castillo’s triumph and Peru’s currency, the sol, hit a historic low vis-à-vis the dollar.

Castillo also faces threats from retired top military officers some who were aligned with Fujimori’s father. The group includes 1970s dictator Francisco Morales Bermúdez, prosecuted and found guilty for forced disappearances in the framework of the infamous Plan Condor. In a not so veiled threat against Castillo’s supporters, the retired officers called for strict measures against the “crime committed by the apologists of terrorism” who in the media and social networks refuse to recognize Fujimori’s triumph.

Elites who are resistant to change are also banking on a rift between Castillo and Peru Libre. Castillo is not a member of the party, which calls itself Marxist-Leninist as well as an adherent to the homegrown style of socialism of 1920s communist ideologue José Carlos Mariátegui. Following the first round of the presidential election held in April, Castillo moderated some positions and distanced himself somewhat from the party. Thus he discarded the possibility of widespread nationalization supported by some Peru Libre leaders, though not the demand that mining multinationals pay the state 70 percent of their profits. He also pledged to respect the autonomy of the central bank and ruled out exchange controls.

The Associated Press and The Economist predict that Castillo will have limited options. Foreign Policy argued the same, at least for the short run, stating that the newly elected president “will have to deal with a fractured Congress eager to disrupt the path of any new legislation.” If Castillo ends up buckling under, he will be following in the footsteps of military officer Ollanta Humala who was elected president in 2011 as a staunch anti-neoliberal only to later embrace free market reforms.

Indeed, there is a sorry history of betrayals and turnabouts of this nature in Peru and Latin America. Alberto Fujimori, originally an anti-neoliberal, went the same route after defeating the renowned writer and neoliberal diehard Mario Vargas Llosa in the 1990 presidential elections (ironically, Vargas Llosa in the 2011 elections, was to say “to choose between Keiko Fujimori and Humala is to choose between cancer and AIDS.” For the 2021 elections, Vargas Llosa enthusiastically supported Keiko).

Yet there is reason to believe that Castillo will not betray the Peruvians of humble origin who elected him. One favorable sign is the mobilization of tens of thousands of his followers summoned by Indigenous and Ronda Campesina leaders to defend his victory in the face of Fujimori’s refusal to recognize defeat.

In another encouraging sign, Verónika Mendoza, who was the presidential candidate representing the more traditional left in the first round in April, as well as in the previous 2016 presidential election, signed an agreement with Castillo in which they committed themselves to “go beyond the economic model imposed by the [Alberto] Fujimori dictatorship that has only favored the privileged few.”

One problem area in the alliance between the two, however, is Castillo’s conservative positions on social issues including reproductive rights, gay marriage and immigration, which resemble Fujimori’s stands. Mendoza has diametrically opposed positions on gender and LGBT issues, but has expressed faith that Castillo is a “person of dialogue” who has indicated that he will submit the issue of abortion to the will of the people in the form of a constituent assembly.

Another sign that Castillo will remain on the left side of the political spectrum is the Latin American response to Castillo’s triumph in the face of Fujimori’s demand for a vote recount. In the first ten days after the elections, only progressive “Pink Tide” governments and leaders including Argentine president Alberto Fernández and former presidents José Pepe Mujica of Uruguay and Rafael Correa of Ecuador publicly congratulated Castillo. So did the “Puebla Group” consisting of 32 prominent political figures mostly on the left. One of its members, ex-president Evo Morales, tweeted “on the basis of my personal experience, I suggest to compañero Castillo not to trust the Organization of American States nor [its secretary general] Luis Almagro.”

A broader look at recent developments in Latin America provides an additional cause for optimism. After facing a series of defeats beginning with the presidential election in Argentina in 2015 and then Dilma Rousseff’s impeachment in Brazil, the “Pink Tide” left and moderate left have made an impressive comeback, beginning with the election of López Obrador in Mexico in 2018 and then electoral triumphs in Argentina and Bolivia. To these electoral victories has to be added the ability of Venezuela’s Nicolás Maduro to hold onto power in spite of crippling sanctions and Washington-supported destabilization efforts against his government. In addition, progressive candidates have a fair chance of emerging triumphant in upcoming elections in Chile, Colombia, Brazil and Honduras.

Castillo’s election is especially noteworthy because the “Lima Group,” with its seat in the nation’s capital, was an organization of hemispheric governments intent on bringing about regime change in Venezuela. Peru Libre’s program calls the OAS an “organism of geopolitical control” by the United States and praises the Community of Latin American and Caribbean States (CELAC) and other similar organizational initiatives for creating “a bloc that facilitates the resolution of our regional conflicts on the basis of autonomy.”

Castillo’s triumph is significant for another reason. Increased polarization in Latin America has largely left Washington with the support only of right-wing and largely repressive governments in Brazil, Chile, Colombia, Ecuador, and Honduras. In contrast, Peru, since the overthrow of Fujimori in 2000, tended to be more centrist than rightist and at the same time aligned with the US. The new political correlation throughout the region in which the pro-US governments are mostly right-wing calls for reflection in both Washington and Ottawa. More specifically, both countries need to abandon regime change tactics and hostility toward governments that refuse to tow the prescribed line. If such a change in policy is not forthcoming, a consolidation of Latin American progressive governments in the name of regional unity may leave the US and Canada on the sidelines.