December 2011 photo of a tank at a Kiel Bros. facility is torn down in Indianapolis. The collapse of Kiel Bros. Oil Co. in 2004 was widely publicized. Less known is that the state of Indiana and, to a smaller extent, Kentucky and Illinois, are still on the hook for millions of dollars to clean up more than 85 contaminated sites across the three states, including underground tanks that leaked toxic chemicals into soil, streams and wells. (AP Photo/Brian Slodysko)

Vice President Mike Pence turns nostalgic when he talks about growing up in small-town Columbus, Indiana, where his father helped build a Midwestern empire of more than 200 gas stations that provided an upbringing on the “front row of the American dream.”

The collapse of Kiel Bros. Oil Co. in 2004 was widely publicized. Less known is that the state of Indiana — and, to a smaller extent, Kentucky and Illinois — are still on the hook for millions of dollars to clean up more than 85 contaminated sites across the three states, including underground tanks that leaked toxic chemicals into soil, streams and wells.

Indiana alone has spent at least $21 million on the cleanup thus far, or an average of about $500,000 per site, according to an analysis of records by The Associated Press. And the work is nowhere near complete.

The federal government, meanwhile, plans to clean up a plume of cancer-causing solvent discovered beneath a former Kiel Bros. station that threatens drinking water near the Pence family’s hometown. 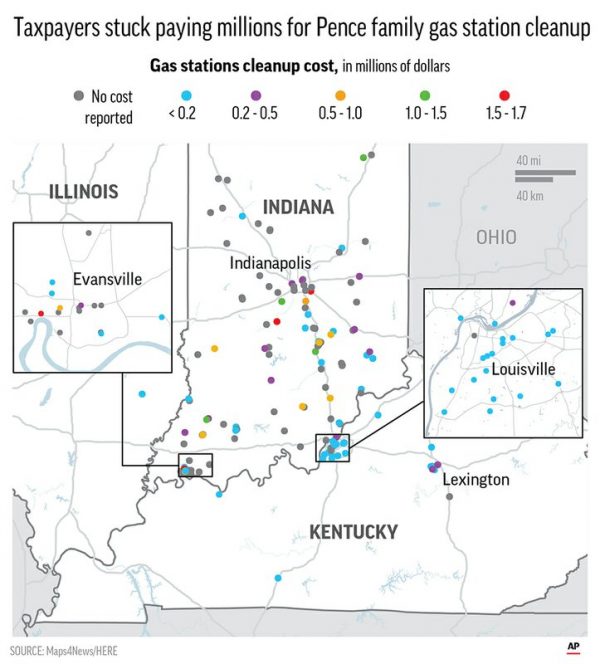 Taxpayers face millions in environmental cleanup of the approximately 200 gas stations left behind by the Kiel Bros. Source AP.

To assess the pollution costs, the AP reviewed thousands of pages of court documents, tax statements, business filings and federal financial disclosures, as well as federal and state environmental records for Indiana, Kentucky and Illinois. The total financial impact isn’t clear because Indiana officials have yet to release cost figures for 12 contaminated areas. Other records are incomplete, redacted or missing.

The public cleanup of more than 25 former Kiel Bros. sites in Kentucky and Illinois — where officials have done a better job keeping costs down — has been much less expensive, totaling about $1.7 million, according to an analysis of records obtained under each state’s public records law.

Kiel Bros. has paid for only a fraction of the overall effort. In court documents , the company cited payment of $8.8 million in “indemnity and defense costs,” but also noted that $5 million of that amount came from the states.

Indiana’s Department of Environmental Management, which regulates gas stations, did not respond to a detailed list of questions from the AP. Spokesman Ryan Clem said the agency is working to provide records requested under Indiana’s public records law that could shed some light on how much former Kiel Bros. sites have cost the state.

Pence spokeswoman Alyssa Farah called the findings “a years old issue” that the vice president has addressed before. She did not elaborate.

In a statement, Pence’s older brother Greg Pence — who was president of Kiel Bros. when it went bankrupt and is now running for Congress as a Republican — distanced himself from the cleanup costs.

“Greg Pence has had nothing to do with Kiel Bros since 2004. This is another attempt by the liberal media to rehash old, baseless attacks,” campaign spokeswoman Molly Gillaspie said.

The fact that the company stuck taxpayers with the lion’s share of the cleanup bill rankles some observers, especially in light of the family’s reputation as budget hawks critical of government spending.

The Pence family, especially Greg Pence, has “some answering in public” to do, said A. James Barnes, an environmental law professor who served in high-ranking posts at the Environmental Protection Agency under President Ronald Reagan.

Mike Pence, then a third-year congressman, lost more than $600,000 when the company went under. He later became Indiana governor and now has assets worth between $532,000 and $1.13 million. Greg Pence, who is seeking the vice president’s old congressional seat, has total assets worth $5.7 to $26 million.

Nearly a decade after going under, Kiel Bros. sites still ranked among the top 10 recipients of state money for such cleanups in Indiana in 2013, the last year for which the petroleum industry has reliable spending data for the company. That was out of more than 230 companies seeking cleanup money that year, including major gas station chains with a substantially larger presence in the state.

Founded as an oil distributor by businessman Carl Kiel in 1960, the company expanded into the gas station business. Pence’s father, Edward, joined in the early years and, by the mid-1970s, rose to corporate vice president.

Mike Pence says he worked for the business — which mostly operated under the name Tobacco Road — starting at age 14. But it was his brother who took over after Edward Pence’s 1988 death and eventually became president.

Make no mistake about it: America finally has a @POTUS who will support small businesses every single day.

By the early 2000s, Kiel Bros. was swimming in debt as industry consolidation and low gas prices stretched profit margins to the brink. The business racked up environmental fines and closed stores. In June 2004, Greg Pence resigned as the company filed for bankruptcy.

“The oil and gas industry changed rapidly in the 1990s and early 2000s, and many small, independent companies like Kiel Brothers were not able to survive,” said Gillaspie, Greg Pence’s spokeswoman.

Not long after, Pence also resigned from the board of a local bank that loaned $16 million to the company. He and Ted Kiel, whose father founded the company, had personally guaranteed the loans, promising to repay outstanding debts with their own assets, records show.

Ted Kiel settled. The bank fought Greg Pence in court and obtained a $3.8 million judgment, which he later settled for pennies on the dollar, according to records and interviews.

Many of the gas stations were sold off and are still operating. But some sites were abandoned, including a graffiti-covered storage tank facility that once towered over an Indianapolis neighborhood. Nearby residents cheered last December as a crew tore down the tank, which was sold by the company for $10 in 2005 and has been an eyesore ever since. The cleanup will cost an estimated $260,000 , according to the city.

Elsewhere in the city, business continues as usual at a gas station that has been in continuous state of cleanup since 1990. Pictures taken in 1992 show standing pools of black sludge where two underground storage tanks were removed. At the time, Greg Pence and state environmental regulators pledged to work together on the cleanup. Since then, it has become one of the most expensive Kiel Bros. sites, costing the state $1.7 million.

In the immediate aftermath of the bankruptcy, the state sought about $8.4 million from the company for cleanup and fines. After a new Republican governor, Mitch Daniels, assumed office in 2005, the state dropped that claim , which had been filed under Daniels’ Democratic predecessor, Gov. Joe Kernan.

The justification for the change is a matter of debate.

Citing the complexities of bankruptcy law, experts said there was no guarantee a judge would approve Indiana’s claim.

“Bankruptcy court is the last refuge of environmental scofflaws,” said Pat Parenteau, a Vermont Law School professor who specializes in environmental and natural resource issues. “This is one of the more fiendishly complicated areas of crossover between environmental law and bankruptcy law that you can imagine.”

But Tim Method, a former deputy commissioner of the Indiana Department of Environmental Management, said the state’s approach to business regulation changed abruptly with the new administration.

“Daniels felt we ought to work for business rather than be a hindrance,” said Method, who was among a handful of administrators forced out after Daniels took over.

Greg Pence wasn’t out of work for long. Within months, Daniels appointed him deputy commissioner of the Department of Environmental Management, the same agency fighting Kiel Bros. in court. Pence stepped down after only a few months, however, and returned to the petroleum business.

Daniels spokesman Jim Bush said the Pence family’s political influence played no role in Greg Pence’s hire. He declined to comment on the state’s decision to drop its claim against Kiel Bros. in bankruptcy court.

For some families living near Columbus, the Kiel Bros. business left behind more than debt. They smelled oil in water drawn from private wells. Nearly three decades later, the unincorporated area known as Garden City is a federal Superfund site, a designation reserved for the nation’s most heavily polluted locations.

Investigators initially determined Kiel Bros. was the source of the oil, along with a plume of trichloroethylene detected decades ago under a gas station. The chemical called TCE is a solvent used to degrease metal parts. The EPA says the plume is drifting toward the aquifer that is Columbus’ primary source of drinking water.

State officials seesawed over whether the company was responsible for the TCE before concluding in 2002 that it was not.

“Why did we absolve the company that we think the problem started with?” said Kevin Butler, a former teacher whose father was one of the first to smell the oil. “It just doesn’t seem very logical that this problem would be centered to this area, and confined to this area, if it wasn’t the responsibility of that company.”

Indiana has since spent more than $860,000 cleaning up the petroleum. The EPA estimates it could cost $320,000 to $1.6 million to take care of the TCE, which taxpayers will likely foot the bill for.

After Kiel Bros. filed for bankruptcy, more than 500 creditors sought more than $150 million from the company, with the state of Indiana filing one of the largest claims, records show .

In dropping its claims against the company for more than $8.4 million, state officials stated in a 2007 court filing that “significant cleanup activity has occurred.” They also said they were “satisfied” with the company’s plan for future cleanup, which relied on the state paying much of the cost.

The decision likely made more money available for other creditors, including businesses the company was in debt to, said John A. E. Pottow, a bankruptcy expert and University of Michigan Law School professor.

“You don’t normally drop your claims in a bankruptcy case, so that’s kind of weird,” said Pottow. “If I’m a creditor, I am elated if one of my peers drops their claim.”

When an underground tank leaks, companies are liable for the damage, but Indiana has been especially amenable to using public money to pay for heavily contaminated soil to be excavated and for high-powered pumps to suck toxic liquid and vapor from the soil.

The state’s payout limit was $2 million per site until Mike Pence signed a 2016 law as governor, increasing it to $2.5 million. In 2016, Indiana paid out nearly two-and-a-half times the national average per incident, according to records.

The decision to drop the court fight with Kiel Bros. could have been “Indiana being Indiana,” Uhlmann said. But another plausible explanation “is Pence and his family having outsized influence,” he said.

Farah, the vice president’s spokeswoman, said Pence did not use his political position to gain favorable treatment for his brother or the company, saying any suggestion otherwise is “simply not grounded in fact.”

Just outside the Pences’ hometown, the state installed elaborate water-filtration systems decades ago at several homes and businesses that are closest to the service station above the chemical plume.

Mike Musillami, owner of a drive-in restaurant, said he’s fortunate to have the equipment, which is maintained by state officials. But many of his customers aren’t as lucky, he said. They rely on bottled water or paper cartridge filters or simply take the risk of drinking from the tap without an elaborate filtration system.

“Long term, this cannot be good for them,” he said. “These are people who are our daily customers. We want them around a long time.”