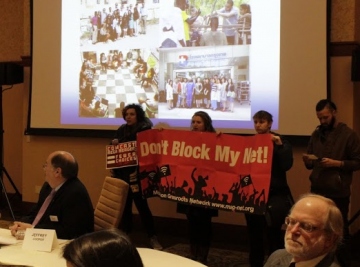 PHILADELPHIA – Today, at the opening session of the University of Pennsylvania (Penn) Board of Trustees Winter Full Board Meeting, more than a dozen Penn students conducted a direct action aimed at David L. Cohen, Executive Vice President of the Comcast Corporation, and Chairman of the Penn Board of Trustees.

Captured on video  – students interrupted the meeting, dropping a banner that read #Don’tBlockMyInternet, in front of the Penn trustees in attendance. Students demanded that Comcast stop its advocacy and lobbying against Title II net neutrality at both the Federal Communications Commission (FCC) and in Congress; they also spoke out against Comcast’s push to merge with its biggest competitor, Time Warner Cable. They challenged David Cohen for missing the meeting, prioritizing his efforts to advance Comcast’s agenda over the public interest.

The video above shows visibly uncomfortable Penn trustees, directly facing representatives of the over 4 million people who have pushed the FCC to protect the Internet by reclassifying it as a communications service under Title II of the Telecommunications Act. Students also held a banner opposing the Comcast-Time Warner Cable proposed merger, and called for Comcast and Penn to both pay their fair share in resources to Philadelphia, the poorest big city in the United States.

Comcast, headquartered in Philadelphia, has been a forceful opponent of net neutrality, spending tens of millions in the past year to block the FCC from protecting consumers from discrimination online. After the FCC vote this morning in favor of strong Title II net neutrality, large telecommunications companies like Comcast are immediately turning their attention to Congress in an attempt to overturn the rules protecting American consumers.

“Without a strong open Internet, our future as students, leaders, and communities is under dire threat,” said Levi Gikandi, who organized the protest with dozens of other students at the Penn Board of Trustees meeting today. “As University of Pennsylvania students, we believe it is our duty to remind David Cohen, as Chair of our Board of Trustees and Executive Vice President of Comcast, to protect our futures. Both Comcast and Penn have a responsibility to the Philadelphia community and the world. But instead of facing us, Cohen is likely in Washington today, trying to undermine our right to communicate. With a net neutrality victory for the people imminent at the FCC, we came out today to send him a message to do the right thing – don’t block our internet.”

“Over 5000 Philadelphians, including these student leaders at Penn, have contacted us, asking how we can make sure Comcast is accountable to its home city and the entire country,” said Bryan Mercer, co-executive director of Media Mobilizing Project, a longtime leader in local and national movements for media justice, and an anchor member of Media Action Grassroots Network (MAG-Net). “With these student leaders bringing #Don’tBlockMyInternet to Comcast’s David Cohen, we hope he and his colleagues see that Title II net neutrality, no Comcast-Time Warner monopoly, and Comcast accountability at home is the path they should take forward if they want to succeed for the next generation.”

The action was part of a series of #Don’tBlockMyInternet events that happened across the country from the Bay Area and New York to Illinois and New Mexico.