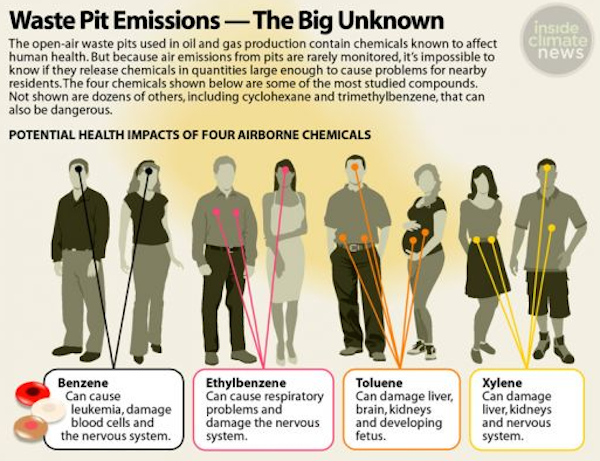 In a reflection of growing national concern about the disposal of oil and gas waste, a Pennsylvania congressman launched an investigation Wednesday into the way his state regulates the discarding of the unwanted, often toxic material.

Rep. Matthew Cartwright, a first-term Democrat from eastern Pennsylvania, wants to know more about how the contaminated leftovers from hydraulic fracturing, or fracking, are regulated.

In an email exchange with InsideClimate News, Cartwright said “preliminary reports indicate there are big gaps in protections and oversight that the federal government might have to fill.”

Fracking, the process of blasting a cocktail of water, chemicals and sand down a well to crack open shale bedrock to extract fossil fuel reserves, has transformed Pennsylvania into the third-largest state producer of natural gasbehind Texas and Louisiana. In those two states and others, questions are increasingly being raised about waste disposal’s threat to human health.

For the past 18 months, InsideClimate News and The Center for Public Integrityhave been reporting on air pollution from oil and gas production in Texas, including at waste disposal facilities.

Cartwright also has introduced legislation to repeal the exemption that allows oil and gas waste to escape regulation as hazardous material.

As a member of the House Subcommittee on Economic Growth, Job Creation and Regulatory Affairs, Cartwright opened the new investigation, saying fracking waste can “cause harm to human health and the environment” if not properly handled.

On Wednesday Cartwright sent a letter to Dana Aunkst, the acting secretary of Pennsylvania’s Department of Environmental Protection (DEP).

“The Subcommittee minority is conducting this oversight to determine if state regulations and monitoring of fracking waste are sufficient to ensure accuracy, completeness and compliance with applicable environmental laws,” Cartwright said in the letter.

The Pennsylvania DEP did not respond to calls for comment on the investigation.

In announcing the probe, Cartwright said this is a “significant first step in a comprehensive nationwide investigation.”

Cartwright called oil and gas waste disposal a national priority because of the huge amounts of waste being generated.

“We don’t know very much about what happens to these wastes and what impacts they may have, and it’s important for Congress to take a look at this issue that does not get the attention it deserves,” Cartwright said in an email to InsideClimate News.

“Waste is like the forgotten stepchild of the fracking boom,” said Nadia Steinzor at the environmental group Earthworks. “It’s great that Congressman Cartwright is calling out the state of Pennsylvania on this issue.”

The investigation is the latest to target the state’s environmental regulators. Last week, the agency came under fire after revelations that it had improperly carried out fracking-related air studies in 2010 and 2011.

The congressional inquiry is expected to expand to other states before the end of the year, mirroring a growing concern over the disposal of massive amounts of waste generated by fracking.

Among other concerns, Cartwright wants to determine whether Pennsylvania is adhering to the federal Clean Air Act, which mandates protection from airborne contaminants.

Cartwright cites a 2011 minority staff report of the House Energy and Commerce Committee. It identified 29 chemicals found in fracking waste that are possible human carcinogens, and are regulated under both the Clean Air Act and the Safe Drinking Water Act for their risks to human health.

An investigation published earlier this month by InsideClimate News found that in most states where fracking is taking place, air emissions from oil and gas waste are among the least regulated, least monitored and least understood components in the extraction-and-production cycle.

This lack of understanding can be traced to decisions Congress and the U.S. Environmental Protection Agency made decades ago, when oil and gas producers successfully lobbied to get most of their waste exempted from federal hazardous waste regulations.

The exemption was granted in 1988 even though an EPA study from a year earlier concluded that 23 percent of the waste samples the agency had collected contained one or more toxic compounds––at levels 100 times higher than those considered safe for humans.

But that same EPA study also recommended granting the exemption because the authors determined that the expense of disposing of so much hazardous waste would likely slow domestic energy production and there weren’t enough hazardous waste sites to handle the waste.

Cartwright cites a report from earlier this year by the Pennsylvania auditor general that concludes the state’s system for oversight of fracking waste “is not an effective monitoring tool” and “is not proactive in discouraging improper, even illegal, disposal of waste.”

The DEP has taken strong action against two waste handlers in the state in the last two months. In September, the agency issued a $4.15 million fine to operator Range Resources for four leaky impoundments. Earlier this month, the DEP announced it was pursuing an even larger fine of $4.5 million to EQT Production Co. for a major 2012 impoundment leak.

According to Davitt Woodell, president and CEO of the environmental advocacy group Pennsylvania Environmental Council, this is a “signal that the DEP will step up and enforce” its existing waste regulations.

Still, Woodell says, even stronger rules are needed—and the DEP knows this. That’s why the agency is drafting stronger measures, such as requiring that all large open-air waste pits have double liners and leak protection systems in place.

Cartwright’s committee is seeking answers by November 12 to more than a dozen questions about Pennsylvania’s process for monitoring the handling and disposal of fracking waste.

Among the answers Cartwright wants from Pennsylvania’s environmental regulators are:

Cartwright, who campaigned on a promise to make sure that fracking doesn’t pollute air and water, also has proposed legislation that has nationwide implications for the way oil and gas waste is handled.

Cartwright said he hopes the investigation will help establish the importance of closing federal loopholes.

“If the investigation demonstrates a serious lack of accountability and regulations at the State level, it will only reinforce the necessity of passing the CLEANER Act,” he said.