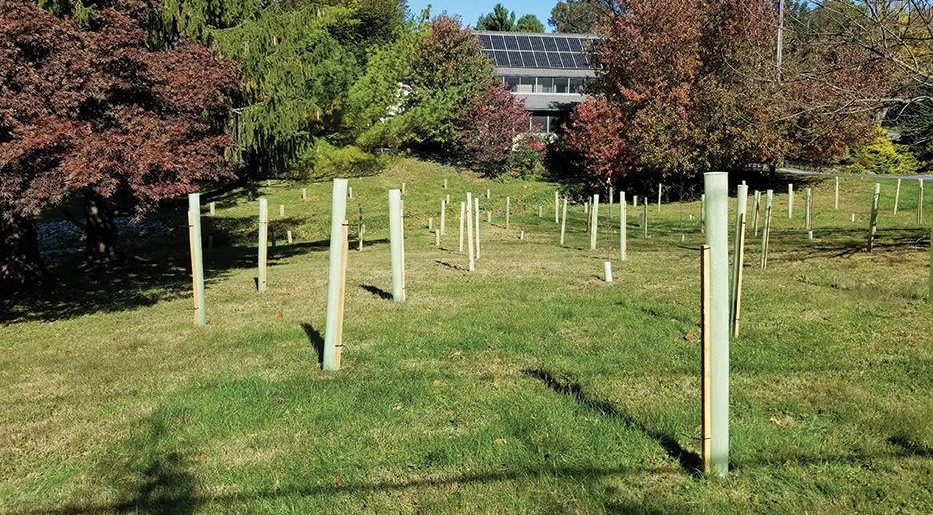 Above photo: This backyard in Lancaster County, PA, is slowly being turned into woods. Ryan Davis.

Well-shorn lawns are still the norm on the grounds of parks, schools, churches, hospitals, business parks and neighborhoods. While better than exposed bare earth, such swaths of green are still environmental minefields.

Rain flushes dog poop, pesticides, fungicides and other chemicals from those grassy surfaces into local streams. The springtime spreading of fertilizer to keep grass thick and green is a troublesome source of nutrients that are harmful to the Chesapeake Bay.

Close-cropped grass grows from compacted dirt that doesn’t soak up much stormwater. The short, monoculture grass has no wildlife value. The army of lawnmowers needed to keep the grass cut to socially acceptable length emits air pollution at three times the rate of automobiles.

And keeping everything a tidy green eats up mowing dollars that could be better spent on the missions of churches, schools and the like.

“It’s kind of tyrannical. Lawns control us more than we control them,” said Ryan Davis of the Alliance for the Chesapeake Bay. “One of the most insidious parts of a lawn is it doesn’t do anything. It’s just sterile and sitting there.”

Pennsylvania has come to the same conclusion, launching a campaign to convert 10,000 acres of mowed grass by 2025 into meadows or forests in parts of the state that are in the Chesapeake drainage. There are an estimated 1 million acres of lawn in Pennsylvania’s portion of the Susquehanna River watershed alone.

The lawn conversion initiative, also known as conservation landscaping, is contained in Pennsylvania’s latest official plan for helping to clean up the Chesapeake. It’s the first time that lawn conversion has been included as a Bay cleanup strategy for Pennsylvania, and a priority one at that. The project will count toward the state’s nutrient reduction commitments.

The plan seeks to reduce stormwater runoff which, according to the state-federal Bay Program, is the only source of pollution on the rise. The goal is convert half of the 10,000 acres into meadows and half into forests.

The first focused project to move that charge forward has already begun with a swirl of interest.

The Alliance has partnered with the Pennsylvania Department of Conservation and Natural Resources to do about 20 turf-conversion demonstration projects for free on 60 acres in four southcentral Pennsylvania counties targeted for stepped-up pollution reductions in the state’s cleanup plan. The $400,000 project is being financed with a grant from the National Fish and Wildlife Foundation and others, with matching funds from the Alliance and DCNR.

“Rewilding is kind of what we’re doing,” Davis said.

In one pilot project, in Franklin County, several school campuses, totaling 20 acres, will have their neat lawns planted in trees. Guidelines call for 200 trees per acre and that no mowing can be done five to 10 years later. At a church in Lancaster County, the surrounding lawn will be dug up and turned into a meadow with native grasses that will attract pollinators and add to the area’s biodiversity. Smaller lawns of about 1 acre each will get a makeover around home sites in the four targeted counties of Lancaster, York, Franklin and Adams.

To qualify, properties have to be mowed lawns — not pastures or old fields — and cannot have more than 30% of grounds already in trees.

Even though the project has received little publicity, Davis said he was swamped by interested landowners.

The hope is that the pilot projects will inspire other landowners — both in the public and private sectors — to convert their own green expanses into more environmentally friendly habitat.

“We know it will take a paradigm shift, but we think the time is now. Why not give it a shot?” said Teddi Stark, riparian forest buffer program manager for DCNR.

In addition to the 100%-funded pilot projects, how-to guides and resource materials are being drawn up to help landowners make conversions on their own. And a DCNR advisory committee, with members from the landscaping industry, wildlife groups, insect groups, conservation districts and universities, has begun meeting to draw together partners who can expand the initiative.

The project dovetails with the ongoing work of the nonprofit Chesapeake Conservation Landscaping Council. The organization has, since 2003, been holding training programs for nonprofits, landscapers and landscape designers to help them motivate their customers and community to want more native plants and less impervious surface around their homes and offices. Training programs are taking place throughout Pennsylvania, Maryland, Virginia and Washington, DC.

“It’s a process. It’s not overnight,” said Beth Ginter, the group’s executive director. “What we’re looking for is water quality benefits and reducing the negative impacts of stormwater. Also, the habitat benefits of using native plants, whether meadow or tree planting.”

“We hope that landowners who have the financial ability will take an interest and plant these meadows and trees themselves,” Stark said.

DCNR estimates the cost to convert all 10,000 acres into forests or meadows would be around $17.5 million. Officials will pore over satellite images to find large swaths of turf and approach landowners about making a change. The agency is hiring a full-time lawn conversion specialist, joining a tree-planting specialist who has been on staff for years.

One possible incentive for municipal governments is that lawn conversions can help them meet mandatory stormwater runoff reductions required by permits known as MS4s. “It’s not the biggest bang for the buck for MS4 reductions, but it will move the needle and every bit helps,” Stark said.

When lawn owners are encouraged to allow their surroundings to grow up, they are often concerned about attracting snakes, ticks and mosquitoes.

When asked if a meadow may have more ticks, Davis was forthright. “Yeah, probably. But tick bites are found around the house already. You’re not safe anywhere.” Meadow habitat also attracts birds and other wildlife that eat ticks.

One obstacle program managers will have to deal with is getting many municipalities to revise old ordinances that restrict the height of lawn grass to no more than 6 inches.

But Davis and Stark hope the conservation landscaping movement eventually goes statewide, similar to the long-established push for streamside buffers. And the more people see meadows and treed areas around schools, churches and the like, the more people will accept it, they say.

“If we can make it a normal thing as part of a green landscape, people will take off with it,” Davis predicted.

Ad Crable is a Bay Journal staff writer based in Pennsylvania. Contact him at 717-341-7270 or acrable@bayjournal.com.