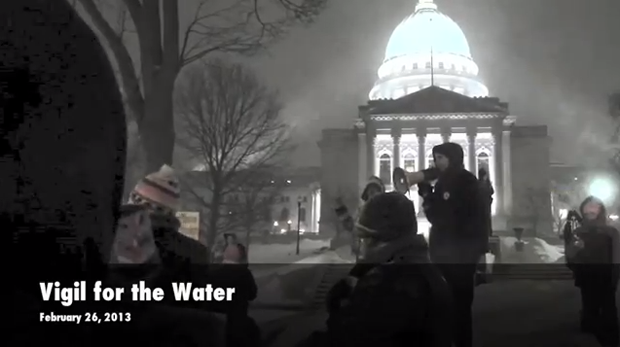 Wisconsin State Senator Bob Jauch (D-Poplar) and Representative Janet Bewley (D-Ashland) of the 74th Assembly District have issued a joint letter to Gogebic Taconite’s president, Bill Williams, calling for the removal of the armed guards bearing AR15 assault rifles from the company’s drilling sites in northwestern Wisconsin’s Penokee Hills. The text of that letter follows a short video about the situation.

We are calling on you to immediately remove the heavily armed masked commando security forces currently hired to protect your company’s property in the Penokee Hills. The images are horrifying and the action by the company to hire this high security Arizona firm is appalling. These kinds of security forces are common in third world counties but they don’t belong in Northern Wisconsin.

We cannot begin to describe how upset the citizens of Northern Wisconsin are at the sight of our forests being patrolled by masked soldiers carrying military style assault weapons like mercenaries in a time of war. While no one can argue that your company does not have the right to protect your private property, these armed guards serve no purpose other than to intimidate local citizens and increase local tensions. No one in their right mind can justify this excessive use of force. These individuals are not deputized and they can’t arrest anyone. What they can do is unjustifiably scare people, and that appears to be your intention.

While they have a constitutional right to open carry, they don’t have the legal authority to utilize their assault weapons to protect your property, so why are they carrying them?

These weapons are used to kill. Is the company really going to argue that these camouflaged masked men really need this show of force to protect themselves from innocent citizens armed with bug spray who are hiking the forest to view the drill site?

You should keep in mind that the Penokee Hills do not belong to Gogebic Taconite and are open to the public, regardless of the activities undertaken at the site. Any security detail you employ needs to recognize that fact and be structured to work with the public, not antagonize and intimidate them. That is one major reason that your previous policy of employing local off duty law enforcement officials was so successful.

In the one incident over a month ago, there was an altercation between protesters and mining officials. Since then, law enforcement officials have reported no other incidents at the site. It is our understanding that an individual has been arrested is scheduled to be appear in court and be
held accountable for her actions.

As you know, unlike local law enforcement, this security force will not have any authority to detain or arrest someone at the site. In the case of an incident, all they can do is report it to local law enforcement. They would only be excused to use force to protect themselves and one could
argue that hand gun could be just as effective as an assault weapon would be if they felt their personal safety were in jeopardy.

All of this raises the question of why your company has decided to take such a confrontational and incendiary step that will clearly do more to intimidate local citizens and increase local tensions than it will to make you, your staff, or your equipment any safer.

By rescinding this very misguided decision, you can send a message to Northern Wisconsin citizens that despite the heated rhetoric coming from the company over the last several weeks, you are interested in working with your new neighbors and willing to cooperate rather than relying on intimidation and threats.

Not only does this decision reflect bad judgment, it is unfortunate that you don’t understand how damaging an image it creates of Northern Wisconsin. Those who live here and work here hardly want to spend their time explaining that our forests are not filled with mercenaries from third
world countries.

We hope you will recognize this serious error in judgment and replace these new security forces with something far less offensive and more along the lines of the local security staff that have been safely protecting the property for the last month.

We look forward to your immediate removal of this new security squad.