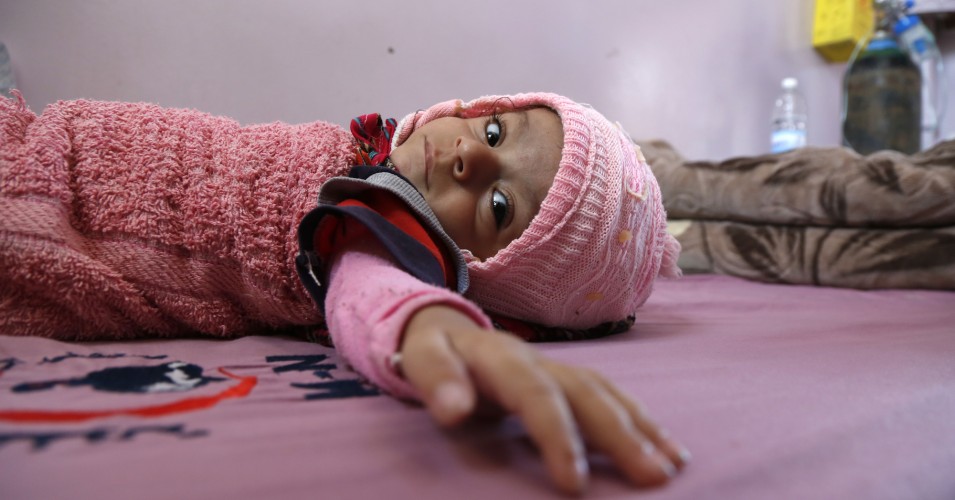 ‘People Are Not Starving, They Are Being Starved’

Above photo: A Yemeni malnourished child lies on a bed where he receives treatment at the malnutrition treating department in Al-Sabeen hospital on January 26, 2021 in Sana’a, Yemen. The situation in Yemen is getting worse and it is projected that the population will experience alarming levels of acute malnutrition and food insecurity in Yemen which is the site of the worst humanitarian crisis in the world, where over 24 million out of the country’s total population of 30 million need humanitarian aid, and one in five children in danger of malnutrition. Mohammed Hamoud/Getty Images.

NOTE: It is important to recognize that starving people is a choice and hunger can be ended, but ending hunger requires more than spending more money on food aid. There needs to be an end to the economic war, referred to as ‘sanctions,’ that the United States and its Western allies are waging on almost 40 nations. It requires ending corporate land grabs and government subsidies for factory farms that decimate smaller farmers. It requires ending the tactic of destroying and stealing food as the United States is doing in Syria. It requires ending economic support for the state of Israel that is blocking access to food and water in Gaza. And it requires ending wars and taking effective steps to mitigate the climate crisis.  – MF

“It is human actions that are driving famine and hunger, and it is our actions that can stop the worst impacts.”

Over international 250 organizations are demanding urgent action from global governments to address the hunger and famine faced by hundreds of millions—a crisis the groups said is driven largely by policy choices including ignored appeals for a global ceasefire and humanitarian funding.

“These people are not starving, they are being starved,” the groups wrote in an open letter released Tuesday.

Referencing the countries where they operate—Yemen, Afghanistan, Ethiopia, South Sudan, Burkina Faso, DRC, Honduras, Venezuela, Nigeria, Haiti, CAR, Uganda, Zimbabwe, and Sudan where they operate—the groups said, “These girls and boys, men and women, are being starved by conflict and violence; by inequality; by the impacts of climate change; by the loss of land, jobs, or prospects; by a fight against Covid-19 that has left them even further behind.”

The letter—signed by the International Council of Voluntary Agencies, Oxfam International, Danish Refugee Council, and Save the Children—was released a year after the World Food Programme (WFP) executive director David Beasley warned of the threat of “multiple famines of biblical proportions.” Despite that grave warning, the groups said in a statement that so far this year, donors have funded a mere 5% of the United Nations’ $7.8bn food security appeal for 2021.

“Every day, we share stories and evidence of hunger, starvation, and increasing humanitarian needs. Yet this does not prompt urgent action or sufficient funding,” they wrote.

“It is human actions that are driving famine and hunger,” the  groups said, “and it is our actions that can stop the worst impacts.”

Today, together with 250+ NGOs we published an open letter calling upon leaders to urgently increase aid and stop over 34M people from starving this year. RT the letter so we can #FightFamine @ICVANetwork #HungerPandemic https://t.co/nesHTVTfb7 pic.twitter.com/zZBHgLZ0Ia

The letter asks the states to immediate provide $5.5 billion in food assistance to reach those “who are a step away from famine.”

That amount, the groups’ statement noted, is the equivalent of less than 26 hours of the $1.9 trillion of countries spend each year on the military.

Given conflicts’ role in driving hunger, global leaders must also work to “end conflict and violence in all its forms,” including by heeding U.N. Secretary-General António Guterres’ call last year for a global ceasefire so that humanitarian assistance can reach those in need.

“There is no place for famine and starvation in the 21st century,” the open letter says. “History will judge us all by the actions we take today.”

“The richest countries are slashing their food aid even as millions of people go hungry; this is an extraordinary political failure,” said Bucher, urging them to “urgently reverse these decisions.”

“And we must confront the fundamental drivers of starvation—global hunger is not about lack of food, but a lack of equality,” she added.

Inger Ashing, CEO of Save the Children, issued a similarly scathing statement.

“We have warned donors over and over again—their inaction is leading to death and despair among children, as we see in countries across the globe every single day,” Ashing said.

“That thousands of children will be dying of hunger and disease in 2021 is a political choice,” she added, “unless governments radically choose to help save the lives of children.”

WFP warned last year that 270 million people were on the brink of starvation.

Receiving the Nobel Peace Prize in December on behalf of the organization, WFP’s Beasley said that the award was “more than a thank you. It is a call to action.”