Above Photo: MICHAEL KULMAR VIA GETTY IMAGES. High rise buildings in Honolulu, Hawaii. Workers in this state need to earn $36.13 an hour to afford a modest two-bed rental property.

Here’s how much you’d need to earn an hour to afford a modest apartment.

The hourly wage needed to make a modest two-bedroom apartment affordable is $22.10 – more than three times the minimum wage. Given that the average hourly wage of renters in the U.S. currently stands at $16.88, it’s clear the gap between wages and affordability is stark. 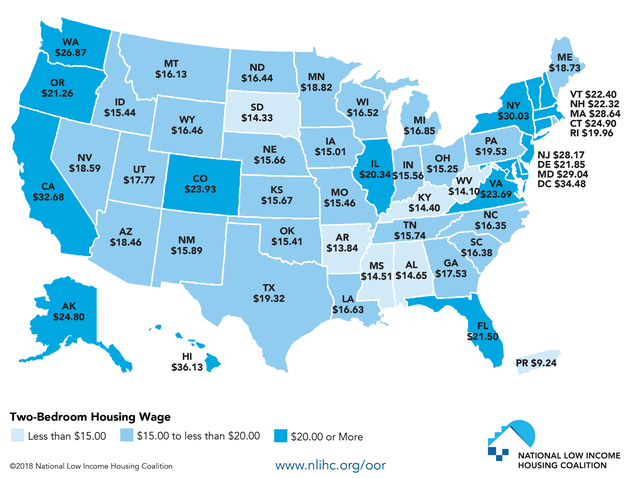 NATIONAL LOW INCOME HOUSING COALITION
A map showing the hourly wage a household must earn (working 40 hours a week, 52 weeks a year) to afford the fair market rate for a two-bedroom rental home without paying more than 30 percent of their income.

The figures are from the National Low Income Housing Coalition’s annual Out Of Reach report, which documents the affordability of rental housing to low-income families across the U.S.

NLIHC arrived at its bleak findings by taking the cost of a modest two-bed rental home at fair market rent, as calculated by the Department for Housing and Urban Development (HUD) based on an estimate of what a family moving today would expect to pay. It then calculated the amount workers need to earn for these homes to be “affordable” – meaning they spend no more than 30 percent of their income on rent and utilities.

The most expensive state is Hawaii, where the fair market rent for a two-bed rental is $1,879 a month, meaning workers need to bring in $36.13 an hour for rent to be affordable. The current average hourly wage in the state is $16.16. Workers earning the minimum wage would need to work 143 hours – or 3.6 full-time jobs – a week to afford a two-bed rental.

At the other end of the scale Arkansas came in at the lowest, with a fair market rent for a two-bed at $720. Workers in the state need to earn $13.84 an hour for this to be affordable. But even here there is a gap, with average hourly wage for renters in the state a little below this level at $13.05.

Even one-bed rentals are out of reach for many low-wage workers. Out of America’s 3,000 counties, in only 22 can a full-time minimum-wage worker afford a one-bed rental home at fair market rate. And these states all have a minimum wage above $7.25.

For extremely low-income households – those earning less than 30 percent of the average income in their area – the situation is particularly tough. Families of four on no more than $26,420 a year can afford a maximum of $660 a month on rent but the national average fair market rent stands at $931 for a one-bed rental.

“The results of this are that a lot of the lowest-income families spend an exorbitant amount of their income just on housing,” Andrew Aurand, NLIHC’s VP for research, told HuffPost. About three-quarters of households earning below the poverty level, many of whom are working, spend more than half their income on housing, he added. This “puts them at risk of losing their home if they have some kind of financial emergency because they have no cushion.”

With this instability comes other problems, said Aurand, including worse outcomes for children at school, risks to jobs and problems with physical and mental health.

“If you look at the 10 occupations that are projected to grow the most over the next decade, seven of those ten occupations are low-wage occupations that pay less than what is needed for a full-time worker to afford rental housing,” said Aurand. These include roles like home care aides and food preparation workers.

The stark findings of this report come at a time when affordable housing, already in crisis, is further threatened by Trump administration proposals to strip back the social security net.

In April, HUD secretary Ben Carson proposed increasing rents for the 4.7 million families relying on government housing support. He also wants to allow public housing agencies to impose work requirements of up to 32 hours a week per household on those seeking assistance.

Carson’s plan, which needs congressional approval, would increase the amount of money families receiving housing assistance must pay towards rent from 30 percent of their gross income to 35 percent. He also proposed an end deductions for childcare and medical expenses. 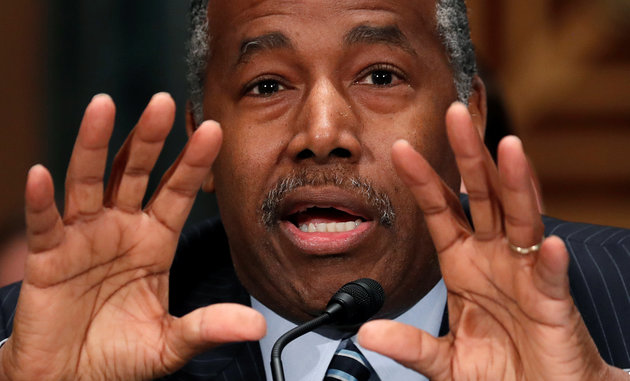 KEVIN LAMARQUE / REUTERS
Secretary of the Department of Housing and Urban Development Ben Carson has unveiled proposals that aim to raise rents for low-income families.

Around 700,000 of the poorest families, who have little or no income, would see rent caps triple from $50 a month to $150 a month. People with disabilities and those over 65 would be excluded from the rent raises.

Carson, a former neurosurgeon who grew up in poverty in Detroit, told Fox News that housing assistance was “not sustainable,” calling the plans “our attempt to give poor people a way out of poverty.”

But critics say these measures will only make the situation worse. “The report shows how difficult it’s become for low-wage workers in this country to afford decent, stable homes,” Will Fischer, senior policy analyst at the Center on Budget and Policy Priorities, told HuffPost. The Tump administration proposals, he added, “would just add to the challenges those families face and make it harder for them to make ends meet and keep a roof over their heads. If the plans were enacted, more families would face eviction and more would become homeless.”

So what’s the answer? Well, solutions are complex and long-term, Aurand said. “There’s really no single bullet solution… but at a federal level we need to invest more resources in our housing programs that assist the lowest-wage workers, as well as other vulnerable families like seniors and people with disabilities.”

Matt Bruenig, president of People’s Policy Project, has advocated for the creation of more social housing as a way of dealing with inadequate housing stock. Municipalities would build this housing, with rents charged at cost and some units subsidized.

But this would only address one part of the problem he told HuffPost; it needs to go hand in hand with better social policies, including benefits like free childcare and free children’s health care. “You need enough housing to house all the people in the area, and you need people to have high enough incomes either from wages or from welfare incomes to be able to cover the rent, and we are struggling on really all three.” Housing is an issue we know how to solve, he said, “but there’s not the political will to do so”.

Senator Bernie Sanders (I-Vt) wrote the preface of the report. “Stable and affordable housing is not only essential for a person to live with dignity, but without it, economic opportunity is simply an illusion,” he wrote. On any given night more than half a million Americans are homeless, Sanders continued, “in the richest country in history, no family should have to make the awful choice between putting food on the table and keeping a roof over their heads. This is America.”