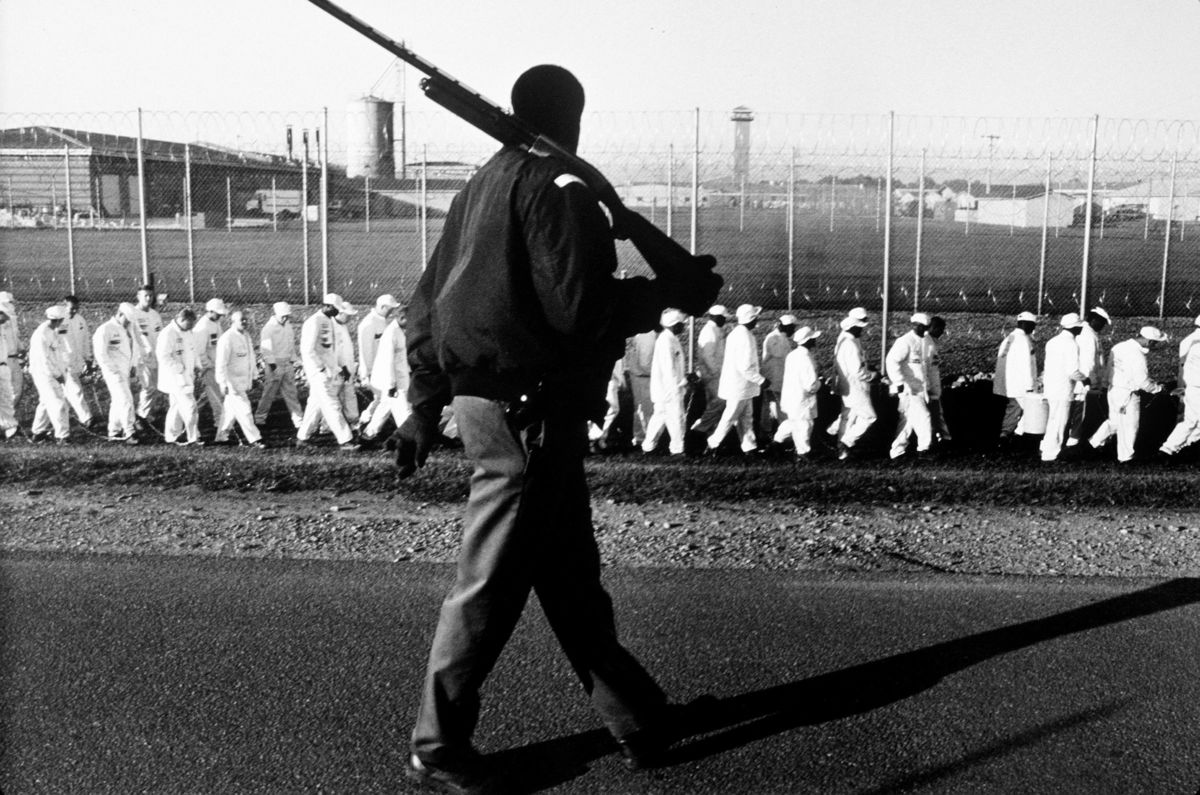 Above Photo: In a 1995 photo, prisoners on a chain gang are taken out for work detail by an armed guard at the Limestone Correctional Facility in Harvest, Alabama.ANDREW HOLBROOKE / CORBIS VIA GETTY IMAGES

On March 25, 2019, Christopher Caldwell reportedly found himself nearly immobile, shackled to a bucket at Limestone Correctional Facility in Alabama. His pant legs were taped up, and his belly, feet and hands were shackled. Caldwell’s handcuffs were shackled to his belly, preventing him from moving his hands above his waist.

Caldwell had just been transferred to the prison from a relatively coveted work release center, and had already undergone extensive precautionary entrance procedures: several body cavity searches, metal detectors and drug dogs. But, per Capt. Patrick Robinson’s “bucket detail” policy — known colloquially as “shitting in a bucket” — Caldwell’s processing wasn’t complete. After guards placed him in a cell, shackled and taped him, he was told his restraints would not be removed until he “shat six times” in the bucket, according to an organizing group that platforms prisoners’ voices, Unheard Voices O.T.C.J. (Of The Concrete Jungle).

Caldwell was bound to the bucket in a cell without running water for five days. His pleas for help were either ignored by guards, or met with mace threats.

Another confined individual subjected to the “shitting in a bucket” practice, Daniel Bolden (AIS #254848), said that his memories of eating like a dog (due to constrained hands) are etched into his mind. Unable to shower, he was forced to lie near and in his own feces and urine.

The Normalization of Torture and Assault

A prisoner and organizer who goes by the pseudonym “Potential” hasn’t spent time at Limestone, but has spoken with others who have. He said they have told him that “Limestone is a different breed of prison — it has its own rules. No one wants to go there.”

Truthout spoke with Jane (name changed), a mother whose son is currently confined at Limestone. Jane wishes to remain anonymous, fearing retaliation against her son. Surveillance cameras aren’t common at Limestone, she told Truthout. Another prisoner tried to sexually assault her son, Jane said, but when he reported the incident, there was no evidence to support his complaint. And when a prisoner is placed in “lockup,” also known as administrative segregation, they are generally handled one on one, without oversight of other guards on duty, according to Potential.

Jane’s son hasn’t been subjected to bucket detail himself, but has described it to her. “Everyone knows it goes on here,” he said to her.

Caldwell was bound to the bucket in a cell without running water for five days. His pleas for help were either ignored by guards, or met with mace threats.

“Lockup is so crowded, that ADOC [Alabama Department of Corrections] started putting men in closets with the bucket for several days,” Jane explained.

These conversations follow a Department of Justice (DOJ) report released April 2, 2019, where the agency concluded that Alabama prisons, including Limestone, constitute “cruel and unusual punishment,” a violation of the Eighth Amendment. The report focused on the ways the ADOC fails to protect “prisoners from prisoner-on-prisoner violence and prisoner-on-prisoner sexual abuse.” The DOJ’s investigation into Alabama prison staffs’ use of excessive force and sexual abuse is an issue “pending with the court,” according to the report.

It is unclear whether the DOJ will release a report of this investigation. But preliminary conversations with those close to the Alabama prison system indicate a second report would probably not be any less damning than the first.

Jane said that she’s been extorted by lieutenants and guards (at a facility other than Limestone) for over $10,000. “Guards stabbed my son. Then I got a call from a Lieutenant who said things would get worse for him if I didn’t send money,” she said.

Another mother of a confined son at Limestone, who was also aware of bucket detail, told Truthout, “I actually had a female guard molest me on one of our visits. She literally put her hand inside of my underwear and touch [sic] my vagina.” The mother didn’t speak up out of fear of retaliation or a denial of her visitation.

Echoes of Previous Forms of Torture at Limestone

“Shitting in a bucket” is eerily similar to a form of torture previously used at Limestone called “hitching post.” At the “hitching post” prisoners were shackled to a metal contraption, shirtless, for hours in sweltering Alabama summers and cold winters without an opportunity to eat, drink or use a toilet. Shorter prisoners’ wrists were sometimes chained to a high bar for hours at a time, and taller prisoners to a shorter bar.

A prisoner testified to Federal Magistrate Judge Vanzetta Penn McPherson in 1997 that “they had me chained, hitched up the hitching rail like I was a dog.” The judge ordered an immediate end to the tactic, writing, “Short of death by electrocution, the hitching post may be the most painful and tortuous punishment administered by the Alabama prison system.” She continued:

With deliberate indifference for the health, safety and indeed the lives of inmates, prison officials have knowingly subjected them to all of the hazards of the hitching posts, then observed as they suffered pain, humiliation and injuries as a result.

The District Court of Alabama ruled that, in certain cases, the use of the hitching post violated the Eighth Amendment. Later, the Eleventh Circuit found the practice unconstitutional, but ruled that prison guards were entitled to qualified immunity. In 2002 the Supreme Court found that guards could be personally liable for shackling people to the hitching post, thereby reversing the Eleventh Circuit’s prior ruling.

Although use of the hitching post has not been reported since the Supreme Court ruling, Potential told Truthout that prisoners in lockup at Limestone have been maced and put in outdoor cages for 12 hours. While caged, prisoners aren’t provided with coats in the winter or water in the summer. People confined in lockup at Limestone could not be immediately reached to verify this claim.

The hitching post received media coverage again in 2017, around the time Jeff Sessions was nominated to head the Department of Justice. During Sessions’s Senate Hearing, Democratic Senator Chris Coons questioned him about Alabama’s use of this tactic: “As the attorney general, you and the governor received letters from the U.S. Department of Justice telling you that Alabama’s use of the hitching post in both men and women’s prisons was unconstitutional and unjustified,” Coons said. “But as I understand it, the use of the hitching post continued throughout your term and you did not act to stop it.”

Likewise, in 1995 Alabama reinstituted the use of “chain gangs,” whereby up to dozens of prisoners were shackled together while working, supposedly to increase the cost-effectiveness of their labor. At the time, Sessions said ADOC’s use of chain gangs was “perfectly proper.”

At the “hitching post” prisoners were shackled to a metal contraption, shirtless, for hours in sweltering Alabama summers and cold winters.

Now, 17 years after the Supreme Court ruled hitching posts to be unconstitutional, a similar battle over the constitutionality of bucket detail could be on the horizon.

Christopher Caldwell has retained a lawyer, according to Unheard Voices O.T.C.J. Kenneth Traywick (AIS 177252), another prisoner who was recently transferred to Limestone and subjected to bucket detail, is also taking action. Traywick, well-known behind bars for his promotion of nonviolence and education, was transferred from general population in a medium security facility to Limestone, a maximum security facility. ADOC officials Robinson and Langford told Traywick he was transferred due to his alleged involvement with Unheard Voices O.T.C.J.

Once at Limestone, Traywick posted flyers around the facility to educate other confined people about their “right to be free from cruel and unusual punishment,” and advertised a lawsuit that the National Lawyers Guild is preparing regarding bucket detail. In response, Limestone officials placed him into solitary confinement.

Traywick went on hunger strike for at least 14 days, until his kidneys nearly failed, to protest his confinement. While on strike, he issued five demands, including that Limestone end “unconstitutional use of the bucket detail practice … with belly chains, shackles, handcuffs, and tape” and that he be transferred out of Limestone.

Aside from Unheard Voices’ whistleblowing, this article is the first time a description of bucket detail has appeared in print publicly. It is unclear whether the DOJ is aware of this practice, or for how long it has been enacted at Limestone. But Alabama prisoners’ families and supporters aren’t waiting around for the federal government to step in. They have scheduled a rally at the Alabama State Capitol on May 13 to address the inhumane treatment of Alabama prisoners.