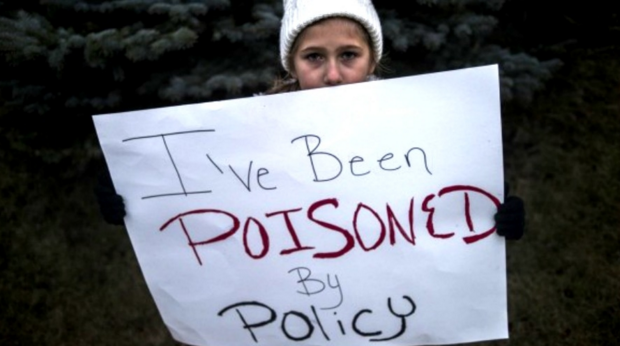 Residents and advocacy organizations are seeking outside intervention, and a complete overhaul of the state government

Fed up with an administration whose policies caused the devastating water crisis and subsequent health epidemic, advocacy organizations and community members are calling for nothing less than a complete overhaul of the way government works in Michigan.

On Tuesday, Flint residents met with leaders of the national NAACP to draw up a “15-point priority plan” for addressing the lead-tainted water crisis. Chief among their demands is the repeal of Michigan’s contentious emergency manager law, which was enacted in 2011 under Gov. Rick Snyder.

A memo (pdf) by the national civil rights group notes that throughout talks with Flint community members, “Most stridently, we heard the need for a return to democracy by repealing the Emergency Financial Manager Law, under which the string of decisions were made that brought Flint to this crisis.”

As Flint native Art Reyes III explained, “The emergency manager law gave unchecked power to the governor in the name of helping these communities emerge from financial distress. But in reality, it unleashed a series of devastating austerity and privatization measures adopted in the name of progress, and took away democratic rights from poor communities of color.”

Indeed, a number of the city and state officials—empowered by that very statute—who oversaw the decision to change the source of Flint’s water supply were named in alawsuit filed in U.S. District Court in Detroit on Wednesday. The complaint argues that those officials repeatedly violated a number of federal laws, including the Safe Water Drinking Act, and will continue to do so without court intervention.

“Flint is Exhibit A for what happens when a state suspends democracy and installs unaccountable bean counters to run a city,” said Michael J. Steinberg, legal director of the ACLU of Michigan, which filed the suit along with the Concerned Pastors for Social Action, the Natural Resources Defense Council, and Flint resident and water activist Melissa Mays.

“In a failed attempt to save a few bucks,” Steinberg continued, “state-appointed officials poisoned the drinking water of an important American city, causing permanent damage to an entire generation of its children. The people of Flint cannot trust the state of Michigan to fix this man-made disaster and that is why court oversight is critically needed.”

“Flint is Exhibit A for what happens when a state suspends democracy and installs unaccountable bean counters to run a city.”
—Michael J. Steinberg, ACLU of Michigan

The lawsuit asks the court to compel city and state officials to follow federal requirements for testing and treating water to control for lead and to order the prompt replacement of all lead water pipes at no cost to Flint residents. The plaintiffs also seek appropriate relief to remedy the health and medical harms to Flint residents from the lead contamination.

Since the crisis in Flint garnered national attention, the state’s Republican government has received enhanced scrutiny for both causing and ignoring the lead-tainted water.

Calls for Snyder’s resignation have also grown, while more than 430,000 have signed apetition advocating for his arrest.

In a column Wednesday, longtime Flint resident and filmmaker Michael Moore reiterated that demand and also argued for a complete federal government takeover of the situation, writing: “The state government cannot be trusted to get this right.”

So, instead of declaring a federal disaster zone, President Obama must declare the same version of martial law that Governor Snyder declared over the cities of Flint and Detroit. He must step in and appoint a federal emergency manager in the state capitol to direct the resources of both the state and federal government in saving Flint.

Meanwhile, Snyder continues to apologize for the crisis and during a press conference Wednesday announced that he requested $28 million in supplemental funding from the state legislature and secured $5 million from the Obama administration as part of a Jan. 16 federal emergency declaration.

But, Leo Gerard, international president of the United Steelworkers (USW) union,argued in an op-ed that the Flint crisis is exactly what happens when a venture capitalist, like Snyder, gets to pull the strings.

“This was not a Hurricane Katrina or Superstorm Sandy,” Gerard wrote. “The tragedy in Flint was a choice. This was a values decision about what was important. Giving a break to big business was the top priority for venture capitalist Snyder. Operating a shoddy government, over-taxing pensioners and poisoning Flint’s children was the result.”