People Are Rising Up Against The Elites, So Should We

Above photo: Protest in Peru, “The People Demand Neither Corruption nor Exploitation.”

This weekend, ten thousand people took to the streets in Guatemala to protest the President and Congress over a proposed budget, the largest in its history, that cuts funds for health care and education as poverty rises, and provides slush funds to politicians and governments. In Colombia, the people held a national strike to protest their violent, right-wing government. In Peru, protests against a right-wing power grab have ousted one appointed president and people are demanding a new government and constitution. And people in Chile won the right to a new constitution. Now they are defending the process to make sure it represents them.

Across the Atlantic Ocean in Nigeria, in what began as a response to ongoing and severe state violence, the #EndSARS movement, has evolved to a struggle for full liberation from a corrupt and repressive government. Their new hashtag is #EndBadGovernanceInNigeria. I spoke with Abiodun Aremu, a long time movement leader in Lagos, on Clearing the FOG, about the current conditions and history of looting and exploitation by those in power.

In these countries and more, the people are rising up against the elite power structure to fight for their rights. Across borders, we share a common enemy, neoliberal economies that funnel wealth to the top, deregulate industries so they violate worker rights and destroy the environment, and impose austerity programs to deny our basic necessities. We also share a common vision for a world where the self-determination of peoples is respected and all people have equitable access to a life of dignity and prosperity. 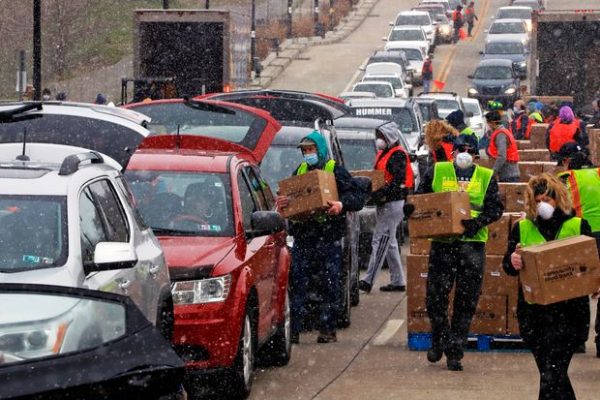 Boxes of food were handed out by the Greater Pittsburgh Community Food Bank. Gene J. Puskar/AP.

The Center for Budget and Policy Priorities has a new report that finds the economy, which improved slightly over the summer, is stagnating again. As the provisions from the CARES Act expire, poverty is rising, especially for black and brown people. Women are also being adversely impacted because of the lack of childcare. Most of the jobs that have been lost, 52 percent, are low-wage jobs.

They point to a recent study from the Department of Health and Human Services that predicts ten million more people will become impoverished by the end of this year. Currently, 24 million adults say they don’t have enough food in their homes and 80 million adults say they are struggling to afford basic necessities. Without adequate support from the government, the economy won’t recover and people will continue to suffer.

The COVID19 pandemic is surging with more than 200,000 cases in one day last week and deaths are rising again. Across the country, hospitals are struggling without enough beds and the staff to care for patients. The United States is expected to remain at this crisis level through the winter unless drastic steps are taken such as a national shut down, including all non-essential businesses. At present, that is not an option being considered by either President Trump or President-Elect Biden.

Both Trump and Biden are putting corporate profits over the needs of people by focusing on reopening businesses rather than providing the relief people desperately need. The Institute for Policy Studies reports that billionaires have increased their wealth by nearly $1 trillion since the start of the pandemic while their workers are left unprotected and without increases in their wages. They specifically call out a “delinquent dozen” of “pandemic profiteers.” 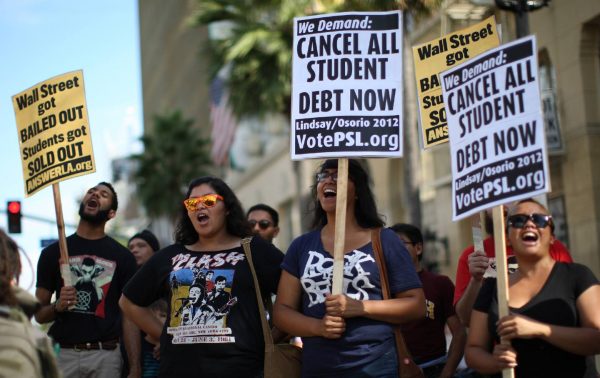 As Congress refuses to provide support for the millions who have lost their jobs, their health insurance and their homes, people are calling on  the incoming Biden administration to take immediate action. For example, David Dayen points out that a provision in the Affordable Care Act allows the President to use executive power to expand Medicare to whomever needs it.

Biden, unfortunately, has made it clear that he opposes Medicare for All.  I spoke about the COVID-19 crisis and our for-profit healthcare system with Chris Hedges on his program, On Contact, this weekend.

This past week, more than 235 organizations called on Joe Biden to cancel student debt, which can also be done using executive power. Student debt has reached a staggering $1.6 trillion, a burden that is crippling people in the current recession. The groups state, “Cancellation will help jumpstart spending, create jobs, and add to the GDP. Short-term payment suspension alone is not enough to help struggling borrowers who are unemployed, already in default, or in serious delinquency.”

In addition to failing to address the pandemic and economic hardship at home, the United States government also inflicts pain and suffering across the planet through the many regime change efforts and military aggressions. Medea Benjamin and Nicolas J. S. Davies outlined ten steps Joe Biden could take immediately to change our foreign policy to one that is in line with international law, provides humanitarian aid instead of bombs and reduces the threat of nuclear war.

Federal spending on the security state dwarfs what is spent on domestic needs. Only 32 percent of the federal discretionary budget is used for health care, education, energy and housing and the biggest chunk of that goes to the Veterans Health Administration. The rest goes to the Pentagon, Homeland Security, the State Department, and NASA. Imagine what could be done to provide universal health care, child care, fully-funded education through the university level, low-cost clean energy and affordable housing if we stopped our wars and brought the military home. 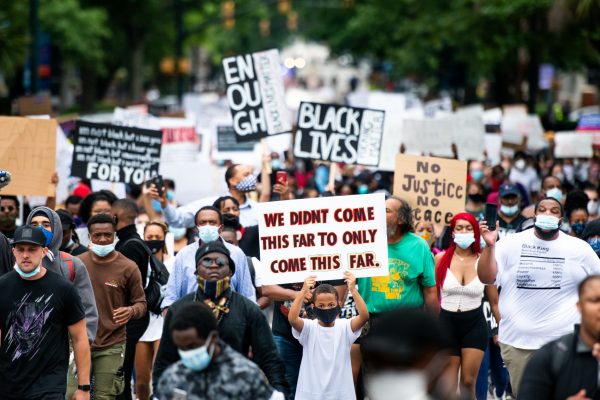 Now that it is clear the next president will be Joe Biden, some people may think it is time to relax and let him go to work running the country. This is the message the power holders want the people to hear. The Biden administration will go to great lengths to give the appearance that it is different and that it will make positive changes, but just as we have experienced over and over again, when it comes to domestic economic policy or foreign policy, there is little difference between Democratic and Republican administrations. Both serve the wealthy class and the military industrial complex.

The power elites are never going to give us what we need. We must demand it. As we see people in other countries doing, we must organize and mobilize with a clear set of demands now. Joe Biden can take immediate steps to relieve suffering, and in a time of crisis as we are in now, he can do it using executive power. We must not give Biden a honeymoon. We must not be fooled by the excuses used to convince us it can’t be done.