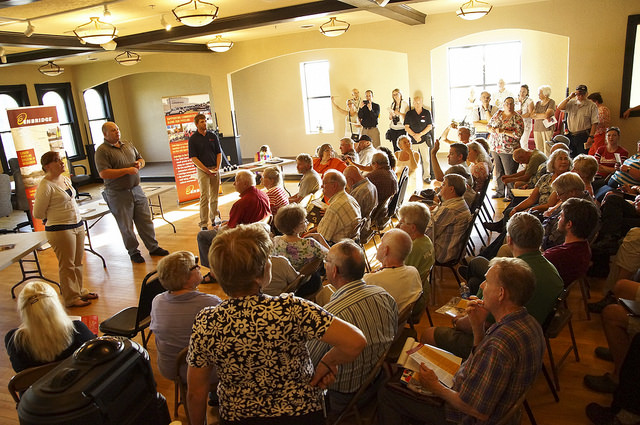 Jefferson, WI – Enbridge knew that the residents of Jefferson County, Wisconsin, were starting to catch on to the dangers of their proposed Line 61 tar sands pipeline expansion. So, in an attempt to create positive PR, Enbridge called for an event Tuesday night at the local Fort Community Credit Union called “Coffee and Conversation” in order to answer questions about the project. Enbridge set the agenda as well as the scope of the hearing, so nobody knew what to expect from the meeting. Nobody knew, that is, until the people of Jefferson County seized control of the event and turned it into a real public hearing.

Two Jefferson Police Officers greeted people as they entered the venue where the hearing was taking place. It was later determined the officers’ time was paid for by Enbridge officials. Some of us wondered why Enbridge felt that police presence was necessary at a friendly PR event. An Enbridge sign-in table awaited attendees and several company representatives stood in front of three large cardboard promotional placards and talked with residents as they arrived. It became apparent that the company plan was to field questions from individual residents instead of holding a full group hearing. Enbridge clearly wanted to avoid a group encounter with concerned citizens. That’s when the people of Jefferson decided to take democracy into their own hands.

Several of those frustrated by the company’s format for the evening started setting up chairs that were stacked on a wall in the room. Enbridge officials seemed perplexed as people started grabbing chairs and setting them into the room. At one point the lead Enbridge spokeswoman tried to tell those setting up chairs to move them to the back of the room, but by this point almost everyone in the room was helping with the impromptu action. Enbridge wanted people alone and isolated. The people in attendance, many of them strangers to each other, wanted a real public hearing.

Once the chairs were all placed everyone sat down and started asking tough questions of Enbridge officials. Most of the residents’ questions were answered with canned company talking points, not taken seriously, or in some cases completely ignored, as was the case when a representative of Enbridge was asked to explain the chemical make-up of the diluent used by the company to help transport thick tar sands. The company officials never gave a straight answer to this question. Finally another woman, despite attempts by an Enbridge official to halt her, revealed the toxic ingredients in the diluent to a horrified room.

Residents brought up many valid reasons to oppose or question the pipeline expansion, but one thing was for certain; the entire room, with one visible exception, was opposed to the pipeline’s expansion or needed more questions answered. Not surprising for a project that would expand Line 61 to carry a far bigger tar sands payload than the Keystone XL, which itself has been delayed multiple times due to fierce resistance. Why then has there only been one public hearing in Superior, Wisconsin on Line 61? Because Enbridge doesn’t want this pipeline to be delayed the same way as Keystone XL so they’ve stealthily moved the pipeline forward in hopes of avoiding the same scrutiny. As the standing room only crowd at this hearing can attest, the people of Wisconsin are not happy about such corporate trickery, and are not about to back down. As Enbridge officials were wrapping up the event, a chant rose from the back of the room:

“Put the people before the profits!”

Grilling Enbridge on Line 61 Expansion from Occupy Riverwest on Vimeo.

The entire “Coffee and Conversation” with Enbridge Hearing was captured on Ustream and can be watched here. The broadcast was started about 30 minutes into the hearing.