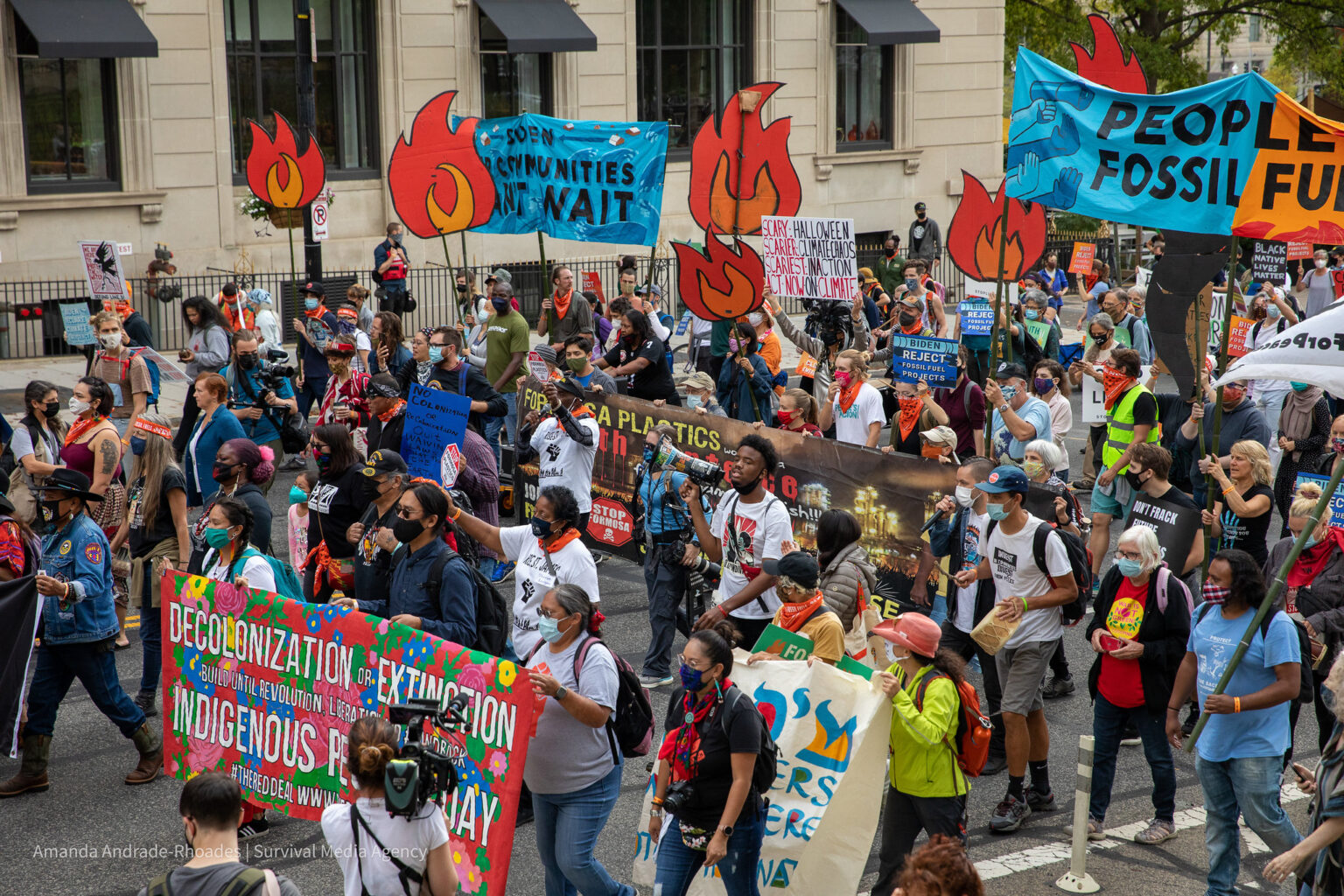 Nearly 400 people have been arrested at the White House since Monday to pressure President Biden to take aggressive climate action and halt fossil fuel projects.

Washington, D.C. — Demonstrators returned to the White House on Wednesday morning for the third day of the “People vs. Fossil Fuels” mobilization, keeping up the pressure on President Biden to declare a climate emergency and stop all new fossil fuel projects.

Under a giant banner that read “Biden: Our Communities Can’t Wait,” hundreds of people marched to the White House this morning to highlight the dangerous ongoing impacts of the climate crisis across the country and the world. As hundreds rallied in Lafayette Square Park, 90 people sat in at the White House fence, risking arrest for the third straight day of civil disobedience.

The Biden Administration has so far avoided questions and refused to comment on the mass civil disobedience or respond to the demonstrator’s demands. Many in attendance at the White House today and throughout the week come from communities, like Cancer Alley in Louisiana or Native communities, that the administration has made public promises to defend but remain threatened by fossil fuel projects, including pending projects that Biden could reject right now. Many now say those promises are being broken.

“I want to tell our President Joe Biden, you campaigned on Cancer Alley. That’s where I live. People are dying rapidly. People are dying of cancer and other ailments,” said Sharon Lavigne, who recently won the prestigious Goldman Environmental Prize for her work with Rise St James, a grassroots organization that’s fighting plastics and petrochemical facilities that threaten her community. “President Biden, I sent you a video to tell you about our community. I’ve asked you to come to see where we live, to come and visit us and get a whiff of all the chemicals that we’re breathing. You promised that you would do something for Death Alley. We haven’t seen anything yet. We want to hold you to what you said to us in your campaign. We voted for you and this is the way you treat us? You are letting us down by not even coming to see about us.”

The third day of the mobilization was designed to draw attention to the devastating climate impacts that are hitting communities across the United States and the urgent need to stop fossil fuel production in order to avert further catastrophe.

Speakers from Alaska, Louisiana, California, North Carolina, Texas, and beyond gave testimony to the heatwaves, floods, fires, hurricanes, and other fossil fueled climate disasters that are threatening their communities.

“When these hurricanes came and they hit the East coast and the Gulf, and it rained on the East Coast for hours, people were left behind. My 71-year old grandmother was left with 19 feet of water around her,” said Kevin Cramer, a resident of Wilmington, DE who works with Palm Collective, a Black-led organization that works to end systemic racism in DC. “If you’re poor and Black and can’t afford flood insurance, how are you supposed to repair? I almost lost my grandmother and my community because Joe Biden doesn’t care about us.”

President Biden has talked about the need for climate action repeatedly as President, calling the situation a “code red” emergency, while Press Secretary Jen Psaki has said the President has “taken across the board steps, every step he can take within his control, to move the climate agenda forward.” Today, activists noted that his actions have failed to meet his rhetoric. Instead of using the tremendous executive authorities at his disposal, the President has allowed dangerous fossil fuel projects to advance and passed the buck to Congress, allowing his agenda to be delayed and weakened by industry-friendly politicians, including those in his own party, like Senators Manchin and Sinema.

“How much longer will the future of our communities be on the shoulders of citizens without the backing of our elected officials?” said Jane Kleeb, the founder of Bold Alliance. “The farmers, ranchers and Tribal Nations should not have to fight for over a decade to protect the land and water. This should be everyone’s fight–including President Biden. We need to stop pretending we can tackle the climate crisis while still building fossil fuel pipelines. Biden has the power and we are asking him to choose us over fossil fuel corporations.”“The Navajo communities in the Greater Chaco landscape cannot wait for the Biden Administration to act to stop oil and gas fracking leases,” said Mario Atencio with Diné CARE, an organization that works to protect the environment of Navajo Nation. “The lack of action to stop drilling on public lands has had serious impacts on the community health of the Navajo people who live near oil and gas wells. According to a community Health Impact Assessment done by the local Navajo communities, the toxic chemicals released by the oil and gas wells are impacting the health of the children. This is the consequence of the inaction: the little ones are being hurt because Biden can’t fulfill something he promised. We can’t wait. Our communities are being hurt. We need the leases stopped.”

According to the International Energy Agency, countries should stop all new fossil fuel production and keep the vast majority of their reserves in the ground in order to keep global warming below 1.5°C, a goal President Biden claims he supports. Since taking office, however, the Biden Administration has approved a record number of new oil and gas leases on public lands, refused to stop major new fossil fuel projects like the Line 3 pipeline, and been slow to crack down on existing pollution. Meanwhile, new analysis from Oil Change International shows that if the Biden Administration moves ahead with 21 major fossil fuel infrastructure projects that are currently under federal review, it would be the emissions equivalent of adding 316 new coal fired power plants — more than are currently operating in the United States. The total emissions from just these projects would represent 17% of total US greenhouse gas emissions in 2019.

Now, the Administration risks heading to the Glasgow Climate Talks next month empty handed. And unlike President Obama, who rejected the Keystone XL pipeline before going to the Paris Climate Talks, President Biden will head to Glasgow with the Line 3 pipeline, the Dakota Access Pipeline, and other fossil fuel disasters hanging around his neck.

Meanwhile, demonstrators will be returning to the White House on Thursday, urging the Biden Administration to finally respond and acknowledge their calls to action. On Friday, the mobilization will march to Congress, where dozens are expected to commit civil disobedience on the steps of the Capitol.