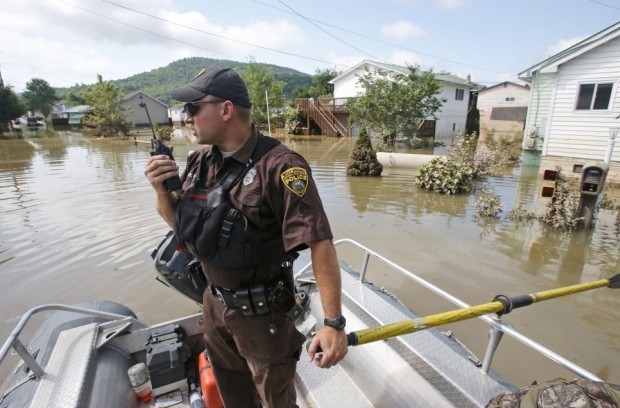 Above Photo: Lt. Dennis Feazell, of the West Virginia Department of Natural Resources, contacts his command center as he and a co-worker search flooded homes in Rainelle, W. Va., Saturday, June 25, 2016.

For decades, ever since scientists began estimating the threat of floods, the stale-sounding concept of “stationarity” has been a big factor in their deliberations. “Stationarity,” the theory that certain things that contribute to floods don’t change over time, traditionally included climate. Assuming a non-changing climate, experts relied on historical flood risk data to gauge the danger of future floods.

But stationarity — as once defined — no longer exists.

“It’s a new way of thinking about risk.” said Doug Plasencia, president of the Association of State Flood Plain Managers Foundation. “We always have estimated flood risk by believing that magnitude and frequency would repeat, meaning that climate and other conditions, such as land use, were relatively stable. But now, with the changes in the climate, that is no longer valid. You have to ask: what’s changed? Are we seeing rainfall events that are unprecedented and more frequent? I think we are absolutely seeing these changes in many parts of the country, and it’s a call to action.”

Climate change has forced scientists, policymakers, flood control managers, urban planners, and especially anyone living in flood-prone areas to rethink how they assess the coming hazards of floods. In recent weeks, a series of terrible flood events in the United States has added a new sense of urgency to their discussions. Even abroad — recently in China, as well as in France, Germany,Nepal, South Africa and India, for example — floods have taken a significant toll on human life and property, exacerbating global concerns.

Increasingly, experts in flood management and climate scientists have come to recognize that global warming — along with geography; topography; land use and development; infrastructure; and cultural beliefs — significantly contributes to the severity and frequency of floods.

“I can’t comment on the issue of geography and city planning, but a necessary if not sufficient condition for flooding is heavy rainfall,” said Michael Mann, a climate scientist who directs the Earth System Science Center at Pennsylvania State University. “We know that heavy rainfall has increased dramatically in recent decades, as we expect it to based on fundamental atmospheric physics, combined with human-caused warming of the ocean and atmosphere.”

Because the air is warmer, it holds more moisture, which increases at a rate of 7 percent per degree Celsius or 4 percent per degree Fahrenheit of warming. This leads to more frequent and heavier precipitation, which, in turn, can produce often severe flooding.

To be sure, storm surges from hurricanes always have put coastal cities at risk, especially those in Texas and Florida. But the situation is worsening because of climate change. A recent reportestimated that more than 6.8 million homes on the Atlantic and Gulf coasts face danger from such surges, and their total reconstruction costs could run in excess of $1.5 trillion.

But the coasts are not alone; they now share the danger with many inland areas. Heavy downpours have increased in frequency and severity nationally in recent decades, and the amount of rain during the heaviest rain days also is higher, according to the 2014 National Climate Assessment.

Their findings estimate that the amount of rain falling in very heavy precipitation events has been significantly above average since 1991, increases most strikingly apparent in the Northeast, Midwest, and upper Great Plains — more than 30 percent above the 1901-1960 average. Moreover, floods in the Midwest and Northeast — where the largest increases in heavy rain amounts have been — also have risen.

While average annual precipitation nationally is higher, there are regional differences, according to the report. For example, precipitation since 1991, compared with the period of 1901-1960, increased the most in the Northeast (8 percent), Midwest (9 percent), and southern Great Plains (8 percent), while much of the Southeast and Southwest had a mix of areas of increases and decreases.

“There is a lot more water,” said Astrid Caldas, a climate scientist with the Union of Concerned Scientists. “These areas are becoming increasingly exposed to flooding, and what happens depends on whether they are prepared or not. Most states are not prepared for current historic levels of flooding,” she added, citing an analysis conducted by Climate Central that grades the flood readiness of regions nationwide.

Among the deadly and destructive floods that have hit areas across the United States in recent weeks:

To be sure, the risk of floods and preventive actions vary by location, and also depend on a state or community’s willingness to invest in flood management infrastructure, including shielding areas that are less affluent. “We need more adaptation measures for everybody, not just for certain areas,” Caldas said. “Some people feel it’s not appropriate to spend $5 million to protect $1 million in assets, which is a very sad thing to hear.”

Also, experts must tailor their approaches to the characteristics and needs of individual states, cities, and communities. The kinds of flood channels that worked in Las Vegas, for example, might be less effective in a state like California, where both torrential rains and prolonged drought occur.

It is a sad state of affairs.

“California has built channels to prevent floods, but the downside is that the heavy rains then go out to sea and are lost, and hence the drought is not alleviated,” said Kevin Trenberth, distinguished senior scientist in the climate analysis section of the National Center for Atmospheric Research. “In many states and counties, the people who are supposed to prevent floods are not the same as those who have to manage droughts. It is a sad state of affairs.”

Cultural factors, including resistance to climate change science, also may be a harmful dynamic, further putting people who live in flood-prone areas in peril. The governors of two states hard-hit this year by floods, Republican Greg Abbott of Texas and Democrat Earl Ray Tomblin of West Virginia, for example, publicly deny the existence of climate change, likely in part because of their states’ long-held ties to fossil fuel industries: coal in West Virginia, oil in Texas.

Their attitude, however, “is silly, because the evidence is there, regardless of cause,” Trenberth said. “The prudent steps, even for an unbeliever, are to assess one’s vulnerability to heavy rains and flooding, tropical storms and so forth, and then take appropriate actions to build more resiliency. That means managing water better, in multiple ways, to not just prevent floods, but also provide buffers for droughts,” he added. “So, levees, culverts, drainage systems, storage systems, dams, reservoirs, sea walls, etc.”

West Virginia is especially susceptible to flooding because of its mountainous topography, and logging, which causes water to rush rapidly downstream to floodplains, where many residents have built their homes. “Logging and mountaintop mining are big factors in West Virginia, since trees slow down the water,” Caldas said. “This influences the speed and the amount of water that rushes down.”

West Virginians not only live in flood-prone areas, but have filled them with construction, such as roads and railways, a trend that began generations ago and continues today, according to J. Steven Kite, associate professor of geography and geology at West Virginia University. Also, many tend to replace their lost houses with new ones at the same location, he said. “Social pressure to rebuild in the same spot after a flood may appear to show good community spirit, but may not be the best strategy,” he said.

Despite a history of flooding in the state, including several events even more deadly than the recent ones, West Virginia has “done far too little to avoid flood risks,” Kite said. “Our history of at least ten floods that killed 20 or more people in West Virginia shows that we have not been prepared for flooding in the past, and suggests we are ill-prepared for flooding as it will be in the future, whether or not one is inclined to believe climate change will be a factor.”

As for the impact of climate change, Plasencia needs no convincing. “If we don’t consider climate change because of uncertainties or denial, that’s like having a financial adviser tell you not to plan for your kids’ education because it might not happen,” he said.

Furthermore, experts “can begin to make decisions right now if we start focusing on the data,” he said. “The climate data will tell us where we are trending. The flood data will tell us what we need to modify. Will the answers be perfect? Will they stand the test of time? Maybe not. But it’s better than doing nothing.”