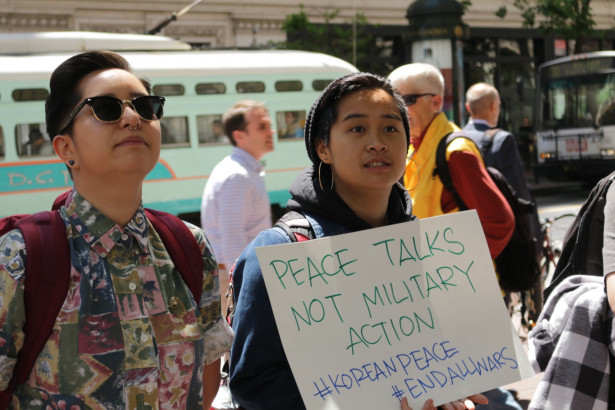 Following Trump’s Senate briefing on North Korea this week, Korean American activists and allies in the Bay Area held their own “people’s briefing” outside Senator Dianne Feinstein’s office on April 27. They called for de-escalation of military tensions between the United States and North Korea and urged Feinstein to take a peaceful and pro-engagement stance on the issue.

In a highly unusual move, Trump called senators to a White House briefing on North Korea on April 26.  The administration called for tighter sanctions, increased funding for missile systems in Hawaii and Australia, and reiterated that all options, including military action, are on the table.

“Feinstein claims that North Korea poses an existential threat and is the number one threat in the world,” said Bay Area activist IO Sunwoo, “I ask Senator Feinstein and the weapons manufacturing lobby that contributes to her office and all the lawmakers in Washington DC how they can dare comment on existential crises when they are in the business of mass destruction.”

Nearly 600 billion dollars in military spending denies food from the mouths of infants and children everyday. It takes medicine and treatment away from the sick every minute in this country. It vanishes disabled folks into the shadows. It warehouses our seniors and elders instead of celebrating and supporting them. It takes away our public services- free media, libraries, public parks. It closes our schools. We are feeling these effects everyday in our lives.

Hyejin Shim of the Korean American Coalition to End Domestic Abuse noted the hypocrisy of the United States calling North Korea a threat to peace:

If a volatile leader, erratic media, political suppression, massive arms build-up and nuclear bombs are the hallmark of a threat, then we must look at the U.S. as the greatest threat to countries all across the world. Since the Korean War, North Korea has not dropped a single nuclear bomb nor has it engaged in any other war or bombing. In the past few years alone, America has dropped bombs on seven countries, including the largest non-nuclear bomb dropped on Afghanistan just weeks ago. What is America’s moral standing vis a vis North Korea when it comes to war?

For decades, my grandmother never talked about the Korean War. Finally, before she passed away, she said what she remembers about the war is walking from her hometown to Busan with my uncle on her back. She said everybody else was doing the same because the bombs were coming. She said there were so many dead bodies, that they didn’t have time to bury people as they walked, and so they stacked the bodies on the side of the road. She said she still remembers the smell of rotting flesh and seeing the light of the bombs in the pitch black night.

Paul Liem of the Korea Policy Institute discussed the root cause of the current crisis:

The Korean War has never ended, and secondly, the United states has decided that the only way the Korean War will end will be with the collapse of North Korea. And for the last twenty years, the United States has pursued a policy of either provoking North Korea into a war or sanctioning them to the point where their country will collapse.

Organizers put out a call to action that includes a social media campaign using the hashtags #KoreanPeace and #EndAllWars and targeted phone calls to elected officials.