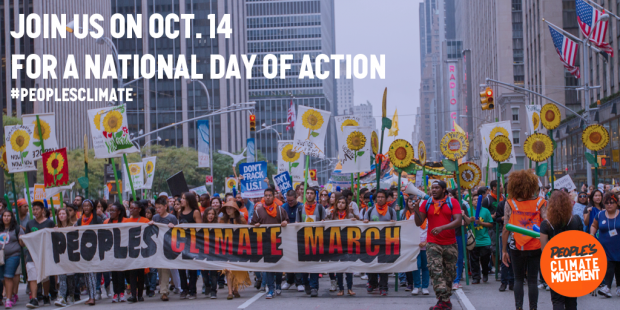 The People’s Climate Movement and others are calling for a National Day of Action Wednesday, October 14 to demand bold action on the climate crisis facing our planet. We are calling for a sustainable, democratic and just economy that preserves our planet and works for all peoples.

At the end of 2015, nations will meet again to negotiate an United Nation’s climate agreement in Paris that commits all countries to address climate change. What comes out of Paris will not mark the end of our efforts but could be an important step in the global process of confronting climate change.

This fall we will continue to build a powerful movement for change and bring the demand for bold action to our leaders in anticipation of the Paris climate talks. We will insist that our public leaders support us in taking action in building a new economy that will avert the worst impacts of the climate crisis. And, we will call out those public leaders, corporations and other organizations that are standing in the way of progress as they deny the science and block the popular alternatives.

By acting now we can prevent the worst consequences of global warming. We can build a fair economy that sustains a living environment while promoting good jobs and social & economic justice.

On October 14, 2015, in cities and towns around the nation, people will be engaging in a National Day of Action to once again call attention to the urgent need for bold steps to be taken to address the global climate crisis. Initiated by the People’s Climate Movement (PCM), these actions are being organized by local groups and organizations from the wide range of diverse constituencies and communities.

Every organization involved in this effort is asked to read and agree to the Jemez Principles for Democratic Organizing which came out of the Environmental Justice Movement several years ago and has been a foundation piece for the People’s Climate Movement.

The People’s Climate Movement hopes local organizers will develop creative, inspirational events that call attention to the urgent need for immediate action on the climate crisis while highlighting the range of communities and constituencies involved in this new movement for climate justice. Where possible, we encourage local events that highlight and challenge those people/institutions/agencies that are either still denying climate change or are simply lying about the seriousness of the problems. Where it makes sense to use these local events to strengthen ongoing campaigns and projects, or to initiate new initiatives locally, we encourage that as well.

Everyone is asked to tie their local efforts to the nationwide movement we are all part of, as well as the global movement. This means posting your activities on the PCM website, it means making this connection when doing local media work, it means participating in nationally coordinated social media work, etc.

In the run-up to the People’s Climate March on 9/21/14, we adopted guidelines for that march all participating organizations were asked to agree to. We have slightly modified those and again ask the local organizing tables to discuss these and adopt them for your events and actions on October 14th.

See where actions are being planned here