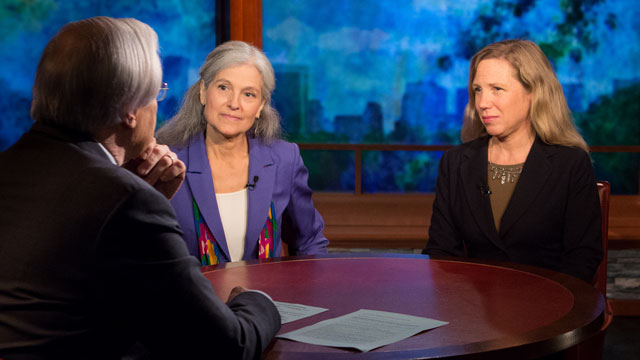 People’s State Of The Union Injects Reality Into Debate

Following the President’s State of the Union on January 20, the Green Party US invited several speakers to present a People’s State of the Union. Rather than the charade, manipulative stories and lies told in the President’s SOTU, these speakers hosted by Green Party Presidential Candidate in 2012 Dr. Jill Stein spoke of the realities that people in the US face with falling wages, rising poverty, environmental and racial injustice and more. The people spoke about real solutions to the crises we are facing – solutions that will not be embraced by our corrupt and plutocratic government but that must be demanded and created by an organized and mobilized populace.

The theme of the President’s SOTU was inequality. And while some of the solutions he presented sound great, Dr. Stein noted that he waited six years, until he had a Republican Congress that would block them before he proposed them. She urged people not to succumb to his rhetoric. A great slap in the face was the President’s feigned concern about inequality while at the same time he promoted a massive trade agreement that will drive even greater inequality and injustice.

Below are my remarks on health care and the Trans-Pacific Partnership. And below that is a link to videos of the presentations and more.

Dr. Margaret Flowers on the state of health care and threats posed by the Trans-Pacific Partnership

Tonight I will cover two critical issues related to inequality. The first is the state of our healthcare system and the second is the Trans-Pacific Partnership, a global treaty that will inhibit our ability to protect our health, our safety and our planet if it is signed into law.

First, the national health law known as the Affordable Care Act or ACA codifies into law a healthcare system based on profits rather than health and guarantees inequality in access to health care. People who don’t have insurance are forced into buying a tiered private health insurance plan: platinum, gold, silver or bronze.

Last year, 66 million people in the US went without necessary care because of cost and 64 million people reported having trouble paying their medical bills. Employer-sponsored insurance premiums are rising faster than income while out of pocket costs have more than doubled in the past decade. Workers are paying more for insurance and getting less. The Consumer Finance Protection Bureau reported that the top complaint they receive is debt and the greatest cause of debt is medical.

Who is benefiting the most from the ACA? It is no coincidence that of all the billionaires in the US, those with interests in healthcare and pharmaceuticals, have gained the most wealth. Lobbyists from those sectors spent more than any other sector to make sure of that. Our healthcare system is on a path to total privatization and will continue in that direction unless we stop it.

The ACA is the opposite of what the majority of people in the United States want and what everyone needs; a universal everybody in nobody out publicly financed single payer health system that provides a single standard of high quality care without financial barriers. This is what equality looks like – everyone, no matter what their income is, having access to the health care they need, a Medicare for all. This is what other nations use. They spend less than we do and have better health outcomes.

In fact, we are already spending enough on health care as a nation to cover everyone. In 2012, we wasted $375 billion on paperwork because of our complex bureaucratic system. This is enough to cover all of the uninsured and make everyone’s coverage more comprehensive. A Medicare for all system is also an economic stimulus for many reasons.

We must stop this failed experiment of our current market-based health system and demand Medicare for all. It is through education, organizing and mobilizing ourselves that we will win our human right to health care.

People power is the force that will transform our society. 2015 is the year to build our power together and we are currently facing an important battle that unites us and that we must and can win.

For the past 5 years, President Obama has been negotiating an agreement known as the Trans-Pacific Partnership or TPP. While it is called a trade agreement, the TPP is about much more than trade. It will give corporations the power to control our laws even down to the local level and will take away our rights to protect our families, our communities and the planet.

Don’t be surprised if you haven’t heard of the TPP. For the first time, the text of a trade agreement being negotiated by the White House was classified so that members of Congress have limited access to it and can’t talk about the details, and so that the media and public are shut out. But over 600 advisors, including many of the most powerful and destructive corporations like Exxon Mobil, Monsanto, Halliburton and Walmart have direct access to the text and are helping to write it.

We’ve seen portions of the text that have been leaked and the TPP is bad news. Think of it as NAFTA on steroids. Twenty years of experience with NAFTA has taught us that rigged corporate trade deals drive a race to the bottom in wages and worker rights, gut environmental protection and public health standards and erode democracy.

Under the TPP, if we pass laws to label our foods so that we know what is in them and where they came from, corporations will challenge them in court. If we ban fracking and other forms of extreme energy extraction, this will be challenged in court. Provisions in the TPP will also harm our efforts to build sustainable local economies.

The TPP will affect everything we care about and that is why it unites us. Together we can stop it.

The President is asking Congress to pass a law called Fast Track that will allow him to sign the agreement before Congress sees it.

We must stop Fast Track.

Congress is planning hearings on it very soon. Here is what you need to do:
1. Go to StopFastTrack.com and use the tools there to contact your member of Congress.
2. Go to FlushtheTPP.org and take the action pledge. You will also find tools there that you can use to write letters to the editor and organize activities to raise awareness in your community.
3. The trade negotiators are meeting in New York City next week. If you can make it there, join the protest outside their hotel on Monday, Jan. 26. You’ll find more details on FlushtheTPP.org. Here is the Facebook Page: Emergency Protest

The reality is that the TPP is a game changer in our fight for equality and sustainability. I urge you to take action. Let’s make 2015 the year that we see that all of our issues are connected and we build power together.