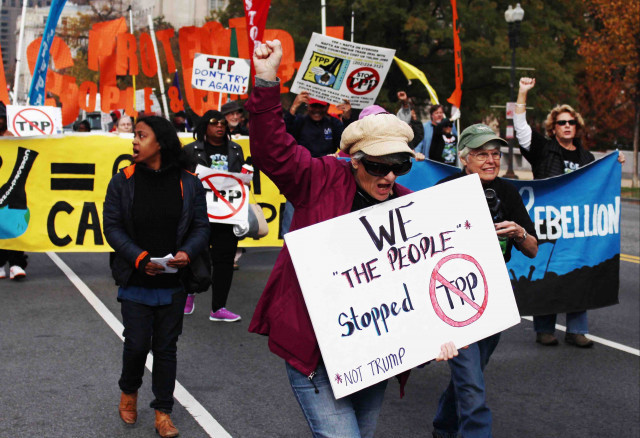 Above photo: People march in Washington, DC on the first day of the lame duck session of Congress to celebrate the popular victory over the Trans-Pacific Partnership (TPP) and declare that it’s time for a People’s Agenda. By Eleanor Goldfield/Art Killing Apathy

The People Should Set the Agenda Not the Oligarchy

Recent academic studies confirm that the United States is a oligarchy – ruled by and for the few, instead of the many. Studies show that government policies overwhelmingly benefit the wealthy and corporations and do not serve the interests or needs of the majority of people.

Now that the election between the two least popular presidential candidates in history is over, the people’s movement should not allow the billionaire elected president to set the agenda. This would also have been true if the other oligarch representative, Secretary Clinton, had been elected as well.

We showed that when the people are organized we have power. We just defeated the ratification of the Trans-Pacific Partnership- this was a treendous people-powered victory over transnational corporate power. We must build on that victory by putting forward our agenda and organizing people so that the political culture is moved to support the urgent necessities of people and planet. We must set the standard and force the political system to move toward us.

Evidence of the oligarchic domination of the political process is obvious from how healthcare was “reformed” and other recent policy decisions.  The Affordable Care Act was written by the private insurance industry and bailed out that industry and protected pharmaceutical company profits while tens of millions of people remain without coverage and even people who have health insurance struggle to afford care. Trillions of dollars were used to bail out Wall Street after the financial crash and most of the ‘recovery’ has gone to the top, while millions of people lost their homes, wealth inequality is growing and more people are in debt. The government has failed to act on the people’s demands for $15/hour minimum wage, police accountability, labels for GMO foods and ending the fossil fuel era. Our people are being sent abroad for endless wars while weapons makers and war profiteers are enriched. 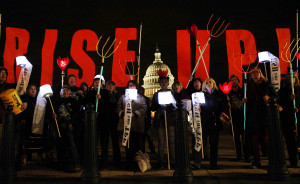 We have the power to change this. In fact, it will only change if we rise up and take action!

Right now is the opportune time for people to say no to oligarchy and demand a people’s agenda. The rejection of the Democrats and the unexpected election of Donald Trump have caused confusion among the elites and have opened political space. The vote was a protest vote against the status quo, just as Senator Sanders’ broad support was also challenging the status quo. Voting for Donald Trump was the only way to protest the system — it was not a mandate for a right-wing agenda — but a protest of Washington, DC writing laws for the wealthy and not for the people.

People across the country are rising up and will continue to do so. This is critical for social transformation. We encourage you to organize in your communities and to take the streets.We must also be clear in our demands.

We are offering an outline for a People’s Agenda. This is based on the initial work of the October 2011 (Occupy Washington DC) organizers and community with additions based on the demands of current movements.

Now you can join the National People’s Agenda Conference calls. CLICK HERE FOR MORE INFORMATION AND THE DATES.

There is a national consensus developing on many of the issues in the People’s Agenda. Below is a series of articles that provide polling showing support for these issues.

– We Stand With the Majority

– The American People Could Rule Better than the Political Elites

The Band of Rebels, Rochester, NY

Vermonters for a New Economy