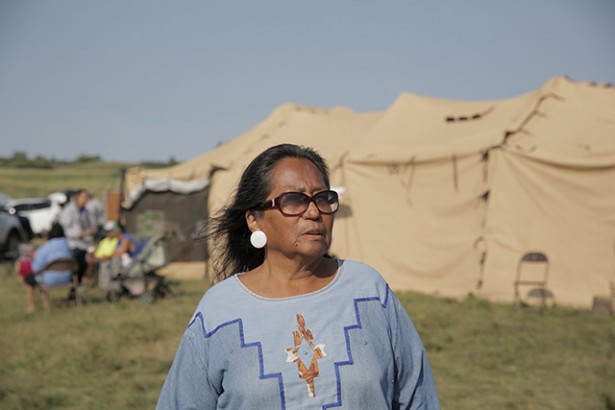 Pernicious Myths About Native Americans Needing To Be Uprooted Now

Above Photo: Phyllis Young, a member of the Standing Rock Sioux, speaks with reporters from a protest camp near the site of a planned road that would be used in constructing a portion of the Dakota Access oil pipeline, in Cannon Ball, North Dakota, August 18, 2016. Five hundred years after the violence of settler colonialism began in the Americas, Native peoples are still fighting to protect their lands and their rights to exist as distinct political communities and individuals. (Photo: Daniella Zalcman / The New York Times)

The following is an excerpt from the Roxanne Dunbar-Ortiz and Dina Filio-Whitaker introduction to “All the Real Indians Died Off” and 20 Other Myths About Native Americans.

No collectivity of people in US American society is as enigmatic or misunderstood as Indigenous peoples. From the very first encounters with them five centuries ago, Europeans were confounded by these peoples who looked so different and lived lives that seemed diametrically opposed to theirs and even blasphemous. Europeans brought with them their fears and prejudices accompanied by a sense of entitlement to the land that had been home to the Indigenous peoples for untold thousands of years. They were occasionally respected by the newcomers, some of whom voluntarily left their own communities in the early days of settlement to live among the Indians. They learned to speak the Natives’ languages, intermarried, and had children with them, sometimes for love or companionship, sometimes just to build alliances and gain access to Native territories and to convert them to Christianity. But by and large the history of relations between Indigenous and settler is fraught with conflict, defined by a struggle for land, which is inevitably a struggle for power and control. Five hundred years later, Native peoples are still fighting to protect their lands and their rights to exist as distinct political communities and individuals.

Most US citizens’ knowledge about Indians is inaccurate, distorted, or limited to elementary-school textbooks, cheesy old spaghetti westerns, or more contemporary films like Dances with Wolves or The Last of the Mohicans. Few can name more than a handful of Native nations out of the over five hundred that still exist or can tell you who Leonard Peltier is. Mention Indian gaming and they will have strong opinions about it one way or another. Some might even have an Indian casino in their community, but they will probably be curiously incurious if you ask them how Indian gaming came to be or about the history of the nation that owns the casino. In many parts of the country it’s not uncommon for non-Native people to have never met a Native person or to assume that there are no Indians who live among them. On the other hand, in places where there is a concentration of Natives, like in reservation border towns, what non- Native people think they know about Indians is typically limited to racist tropes about drunk or lazy Indians. They are seen as people who are maladjusted to the modern world and cannot free themselves from their tragic past.

On the whole, it can be said that the average US citizen’s knowledge about American Indians is confined to a collection of well-worn myths and half-truths that have Native people either not existing at all or existing in a way that fails to live up to their expectations about who “real” Indians are. If Indians do exist, they are seen as mere shadows of their former selves, making counterfeit identity claims or performing fraudulent acts of Indianness that are no longer authentic or even relevant. Non-Natives thus position themselves, either wittingly or unwittingly, as being the true experts about Indians and their histories — and it happens at all levels of society, from the uneducated all the way up to those with advanced college degrees, and even in the halls of Congress. The result is the perpetual erasure of Indians from the US political and cultural landscape. In short, for five centuries Indians have been disappearing in the collective imagination. They are disappearing in plain sight.

The myths about Indigenous peoples that this book identifies can be traced to narratives of erasure. They have had — and continue to have — a profoundly negative impact on the lives of the millions of Native people who still live on the continent of their ancient ancestors. They work further to keep non-Natives in a state of ignorance, forever misinformed and condemned to repeat the mistakes of history, silently eroding their own humanity when they fail to recognize their roles in — or, more specifically, the ways they benefit from — the ongoing injustice of a colonial system. For Native people the effects are felt at every level of personal and public life. They play out in a dizzying array of overt and subtly bigoted ways, resulting in what social scientists call structural violence. Structural violence describes social arrangements that cause harm to people as they are embedded in the social and political structures of society. It can be so blatant that it manifests in acts of individual physical violence, but it can just as easily result in harm by neglect. Erasure is one of the more subtle forms of structural violence visited upon Native peoples.

At a cultural level, structural violence shows up in dehumanizing portrayals of caricaturized images of Indians in the name of honor and respect. This is most obvious in the stubborn adherence to Indian sports mascots, as in the case of Dan Snyder’s Washington R*dskins team name. It is also visible in cultural appropriations such as the ubiquitous (and seemingly harmless) Indian Halloween costumes and feather headdresses worn at music festivals or by models for fashion layouts and runway displays. Cultural appropriation is especially egregious when it involves the co-optation of spiritual ceremonies and the inappropriate use of lands deemed sacred by Native peoples. The New Age movement is a Pandora’s box full of examples of what has been called the plastic or white shaman. Misuse of sacred land has a long history, and it continues. In 2015, Lakota people in South Dakota protested the annual hippie Rainbow Family gathering in the sacred Paha Sapa (Black Hills). The Lakota claimed that these gatherings have a long history of destructive land use and also cited Rainbow Family drug culture, which they saw as highly disrespectful in a place they believe to be the heart and origin of their people.

Popular culture has a long history of portraying stereotyped and blatantly racist images of American Indians, especially in film. Cree filmmaker Neil Diamond’s documentary Reel Injuns traces the history of Indians in Hollywood movies, identifying images we are all too familiar with. With roots in the “vanishing Indian” era of late nineteenth and early twentieth century history, Hollywood filmmakers (like other photo-documentarians of the time such as Edward Curtis) rushed to capture images of Indians before they disappeared into the mists of the past.

Throughout each era of the twentieth century, Indians appeared in films as literal projections of non-Natives’ fantasies about Indians. They include the tragically vanishing Indian, the mystic warrior, the noble and ignoble savage, and eventually the “groovy injun,” embodied as the environmental Indian (the iconic crying “Indian” Iron Eyes Cody), the civil rights fighter (Billy Jack), and others.

Structural violence against Native people often entails a staggering assortment of legislation, court cases, executive decisions, and municipal and state actions that directly affect their lives. This sort of violence will be explored throughout this book, but one of the most potent ways that violence of erasure is deployed in US society is through education. A body of scholarship identifies the ways that Native children have for generations been miseducated under deliberately repressive federal policy, and a substantial body of research also identifies the ways children in public schools are miseducated on US and Native history.  Education scholar Timothy Lintner writes, “History is a delicate amalgam of fact and fiction tempered by personal and pedagogical perception. Though the premise of history is rooted in empiricism, the teaching of history is not so subjective. History classrooms are not neutral; they are contested supremacy.” James Loewen reflected this perhaps most famously in 1995 with the release of his now acclaimed book Lies My Teacher Told Me, in which he tackled the fallacies of the Columbus and Thanksgiving stories.

Most tellingly, in a 2015 study, scholars examined the state standards for teaching Indigenous history and culture in all fifty states and found a wide variance between them. Some states include Indigenous curriculum content and some do not, but the report concluded that, overall, “Standards overwhelmingly present Indigenous Peoples in a pre-1900 context and relegate the importance and presence of Indigenous Peoples to the distant past.”  In other words, Indians are largely portrayed as extinct. Research on Indigenous invisibility and erasure is naturally most prevalent in Native studies, but it intersects with broader research on race and ethnicity too. Critical race theorists and sociologists point out that US society operates on a system of privilege. Systems of privilege can inhere in families, workplaces, and society in general, and are organized around the principles of domination, identification, and centeredness. Whiteness is centered by default, for example: because white people tend to occupy positions of power, they possess a form of unearned privilege. Scholars emphasize the idea that racism is more than acts of individual meanness. It is built into society and functions systemically, rendering it nearly invisible. White privilege, then, stems in large part from race as a social construction. In other words, society and its state are based on a racial hierarchy in which those identified as white have always been at the top. A conservative backlash after the civil rights gains of the 1960s and 1970s resulted in a widespread social denial that racism still exists. Overtly racist laws were abolished, but race and racism are still very difficult for white people to talk about.

The myths about Native peoples outlined in this book grow from the racialized social structures upon which the United States is built. Because these structures are systemic, the myths tenaciously persist despite changes in law and policy over time. Ultimately they serve the settler state and by extension its international allies, who largely fail to recognize the political existence of Indigenous peoples. In the effort to dismantle the myths, the chapters that follow attempt to unpack various tenets of settler colonialism and at the same time construct a counter narrative, one based on truth.