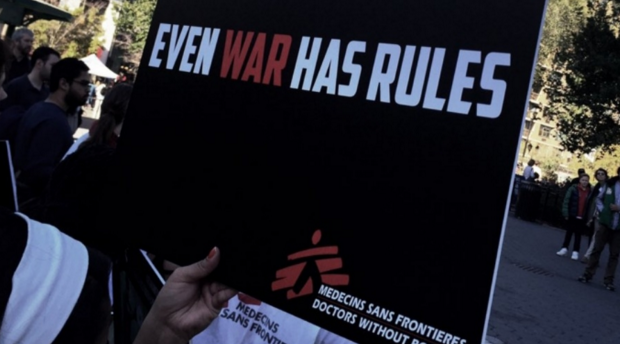 Above Photo: Doctors Without Borders/Médecins Sans Frontières (MSF)delivered over 540,000 signatures on Wednesday to the White House echoing the organization’s call for an independent investigation. MSF-USA/ Twitter.

Wearing white lab coats, workers with the international humanitarian organization Doctors Without Borders and their supporters on Wednesday delivered boxes and boxes of petitions to the White House gates bearing the signatures of more than half a million people who are reiterating the call: “Even war has rules.”

In the more than two months since the U.S. military bombing of a Doctors Without Borders/Médecins Sans Frontières (MSF) hospital in Kunduz, Afghanistan, the Obama administration has thus far refused to respond to the medical charity’s demand for an independent investigation.

Now, more than 540,000 people from across the globe have added their voice to that call. “With the delivery of this petition to the gates of White House, we continue to fight back for the respect of the Geneva Conventions,” Jason Cone, executive director of MSF-USA, declared during a rally in Washington, D.C.’s Lafeyette Park on Wednesday.

“These Conventions govern the rules of war,” he continued. “They were established to protect civilians in conflicts, including patients, medical workers, and facilities. They bring some humanity into what is otherwise an inhumane setting. We face today a critical moment.”

Instead of consenting to the impartial fact-finding mission, the Obama administration proceeded with an internal probe into the October 3 attack which killed at least 30 people.

The Pentagon investigation—which first raised eyebrows when it was leaked on November 25, the day before Thanksgiving—was further thrown into question on Tuesday after reports revealed that two U.S. servicemen issued statements contradicting the military’s account.

According to the Associated Press, two unnamed servicemen reportedly told Rep. Duncan Hunter (R-Calif.) that U.S. special forces called in the airstrike on the hospital “because they believed the Taliban were using it as a command center, contradicting the military’s explanation that the attack was meant for a different building.”

“Without assurances about the safety and security of medical humanitarian space, we dare not go where we are most needed.”
—Dr. Deane Marchbein, MSF-USA

The servicemen allege that U.S. forces “were not aware the Doctors Without Borders building was still being used as a hospital” because Afghan forces told them “it had become a Taliban command and control center.”

However, additional AP reporting found, “The day before the attack, a senior special forces commander wrote in a report that the hospital was in Taliban hands and his objective was to clear it. A senior Pentagon official called Doctors Without Borders to ask whether their hospital had been overrun; he was told it had not.”

Speaking Wednesday, Cone emphasized that parties involved in the conflict cannot be trusted “to carry out an independent and impartial examination of an attack in which they are implicated.”

Also speaking at Wednesday’s rally, Dr. Deane Marchbein, president of the MSF-USA Board of Directors, added: “For people like me who regularly work in war zones, it’s essential to understand and to affirm the rules of war. Without assurances about the safety and security of medical humanitarian space, we dare not go where we are most needed.”