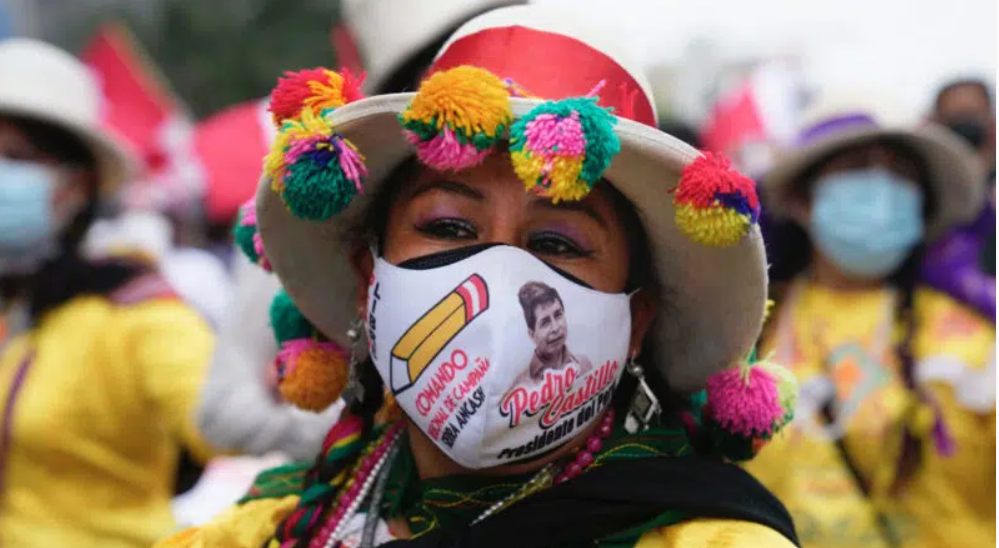 Above photo: A supporter of Peruvian President Pedro Castillo at a rally. File Photo.

The onslaught of the Peruvian right wing against the government of President Pedro Castillo Terrones began long before he was proclaimed president after many delays—it began when his passage to the second round of the elections was confirmed—and has been intensifying for days with virulence and a frankly coup-like character. It includes, among other maneuvers, demands for the president’s resignation in small but very widespread demonstrations of Fujimorism, and requests from deputies for the replacement of Prime Minister Guido Bellido and Foreign Minister Héctor Béjar. The latter, by the way, has laid the basis for an independent and sovereign foreign policy, a defender of non-intervention, a promoter of unity and regional integration through UNASUR and CELAC, which is a distinct departure from the moribund Lima Group: “we condemn blockades, embargoes and unilateral sanctions that only affect the peoples,” he has said.

For imperialism and the ultra-racist local and international economic power groups, it is inadmissible to accept that the first cholo, schoolteacher and Andean peasant in Peruvian history should become president, in such a strategically important country, at a time of revival of popular struggles and the rise of leftist governments in the region. Ever since the overthrow by a right-wing coup of General and President Juan Velasco Alvarado (1975)—also of humble, cholo and northern Andean origin—imperialism took Peru for granted as its docile dependency.

In effect, all the occupants of the Pizarro Palace since then have been lackeys of the United States and the oligarchy, robbers of the public treasury in collusion with the Legislative and Judicial powers. In this context, the dictatorship of Alberto Fujimori played a fundamental role in the application of neoliberalism and the repression of social protest, and today Fujimorismo is the most important shock force of the extreme right. The political decomposition and institutional crisis led to the extreme: the country has had four presidents in its five-year constitutional period since 2016.

For his part, Pedro Castillo, a man of deep Peru, who at the head of his high office will continue, by his own decision, with his modest salary as a teacher, and whose government program seeks to benefit the majority and defend the national interest—unlike neoliberal presidents—has not been granted a minute of peace since he assumed the presidency just 15 days ago. He has been subjected to, along with several of his collaborators, a rain of lies, slander, insults and half-truths by the local and international hegemonic media, which furiously oppose him. These media, by exception, tell some truth, such as the categorical refusal of Castillo and his collaborators to attack Cuba and Venezuela. Over the years they have created such a mendacious and distorted narrative about those two countries—dictatorships that kill and disappear, according to them, when in truth they are the most democratic in our region—that their mere mention frightens many honest people. This is a topic to be debated relentlessly with solid arguments in the battle of ideas between the popular forces and the world media dictatorship and the handful of corporations that control them, in one of the most polarizing and damaging facts even for the procedural democracy existing today. In this climate, despite serious setbacks, a participatory democracy and a new constitutional order such as the one promised by Pedro Castillo in his campaign could unfold.

Castillo has solid social support in the areas that voted for him and is viewed with sympathy in many others, but he only has 37 seats in Parliament plus five from his ally Juntos por el Perú, out of a total of 130, and could be deposed—vacancy as they call it—if the right wing manages to gather a majority of votes, something not improbable. Eventually they could attempt a coup d’état. The small margin of victory that he gained over his rival does not favor him because Fujimorism has led many people to eat up its claims of fraud.

However, it is clear that the moral symbolism of Pedro Castillo’s presidency is of extraordinary historical importance. Rarely has the left succeeded in raising to the presidency such a representative person, coming directly from the teaching and agricultural work, an expression of the Peru of “all bloods,” of the ayllu—a man whose project awakens great hope in Peru, teaming up with the other revolutionary and progressive leaders of the region. The progressive governments, the leftist and popular forces of our America must remain very alert and ready to prevent any right-wing maneuver that seeks to overthrow our beloved Andean master and president.

Angel Guerra Cabrera is a journalist and Cuban political analyst. He was director of the Juventud Rebelde newspaper (1968-1971), Bohemia magazine (1971-1980) and other Cuban publications. He has worked as a journalist in countries in Asia, Africa, Europe, Latin America and the USA. In Mexico he is a columnist on international issues of the newspapers La Jornada and Excelsior. He is coordinator of the Mexico and the Current World Political Reflection Forum, jointly organized by Casa Lam and La Jornada.